Police DEFEND bike riders who refused to use cycling lane

Police have sensationally supported a group of cyclists caught riding three abreast on a one-way street despite having a dedicated bike lane.

Gold Coast Police on Friday defended the group of men, who were filmed on a car’s dashcam cycling up a narrow avenue in Broadbeach, saying they had every right to ride on the road. 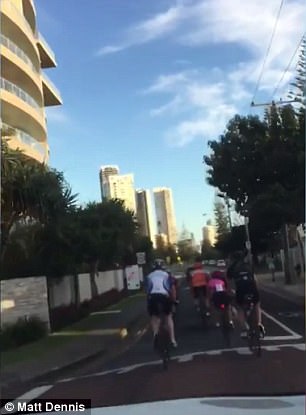 The latest battle in the age-old war between motorists and bicycle riders occurred early Wednesday morning on Hedges Avenue.

A man driving a car captured the conflict, with a group of riders hogging the entire road for a long period of time despite having their own dedicated lane.

‘You guys are deadset f**king imbeciles aren’t ya,’ Matt Dennis yells after eventually passing the group.

However, police say despite the cyclists having their own dedicated lane, there is no law to force the riders to use it.

‘Even though there is a cycling lane there are no requirements for them to stay in the cycling lane,’ Sergeant Buckley said.

‘They can ride two abreast and ride to the speed limit.’

One of the riders, Adrian Ward, agreed with the policeman’s sentiments, telling the Bulletin they weren’t acting to ‘antagonise anyone’.

‘The truth is we were doing the speed limit and it’s safer to ride two abreast on the road than use the bike lane on the right.’

His comments are sure to anger motorists, including Mr Dennis, who says cyclists ‘are a law unto themselves’. 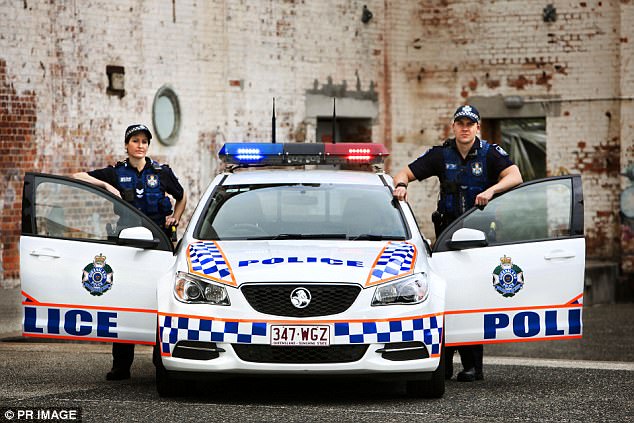 ‘Even though there is a cycling lane there are no requirements for them to stay in the cycling lane,’ Sergeant Buckley said. ‘They can ride two abreast and ride to the speed limit’

The luxurious road runs parallel to the Gold Coast’s picturesque coastline, but in 2015 had its speed limit lowered 30 km/h because people were using it as a detour to avoid peak-hour traffic.

The footage begins with Mr Dennis beeping his horn at the riders, who have consumed the entire street.

‘Get in the cycling lane guys,’ he says.

They seem undaunted by his request for them to move over, with some pointing at speed limit signs and others holding their hands up questioning his intent.

A cycling lane on the right side of the road appears to have an arrow pointing in the opposite direction, but it still remains empty and with sufficient space for the group to move into.

Mr Dennis continues to lightly tap his horn, but the riders, still riding three abreast, do not move over. 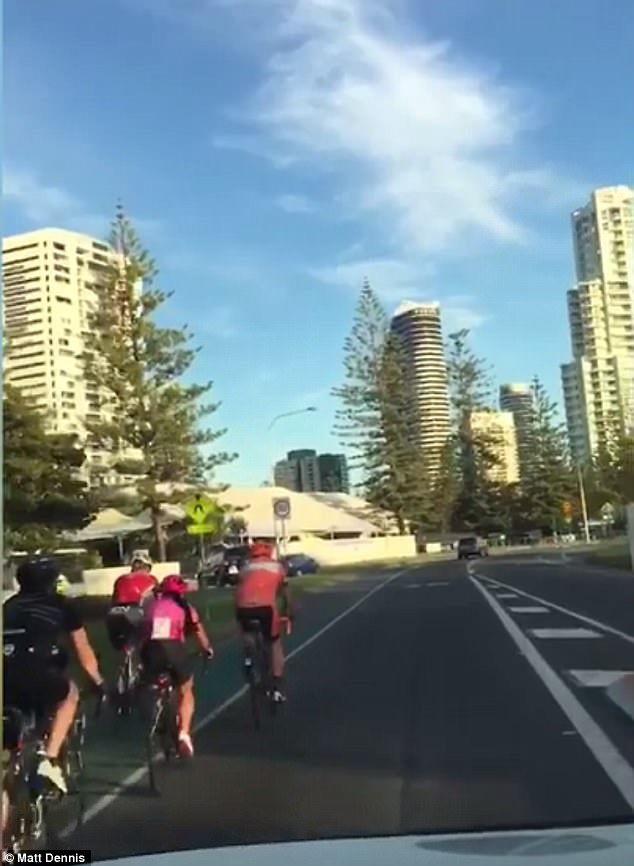 Eventually the road becomes two-way, and another cycling lane opens up on the left of the road. However, only half of the group immediately enter the lane

Eventually the road becomes two-way, and another cycling lane opens up on the left of the road. However, only half of the group immediately enter the lane.

The group then all move into the dedicated lane, finally allowing Mr Dennis to pass, but not before they exchange words one last time.

Mr Dennis calls the cyclists ‘a bunch of f***tards’ while they scream back the speed limit, indicating he wouldn’t have been legally allowed to overtake them anyway.

‘I was going 30 and they were going a little bit slower,’ he told the Gold Coast Bulletin.

‘Who are they to be the ones to say how fast I wanted to drive.’ 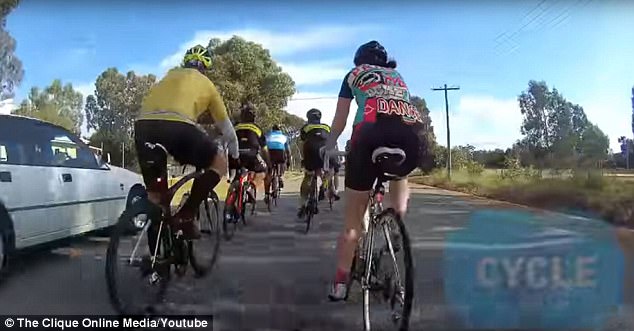 The cyclists begin to veer back from the center of the road after passing the horses, before the Holden Commodore can be seen accelerating in between the horses and the bikes 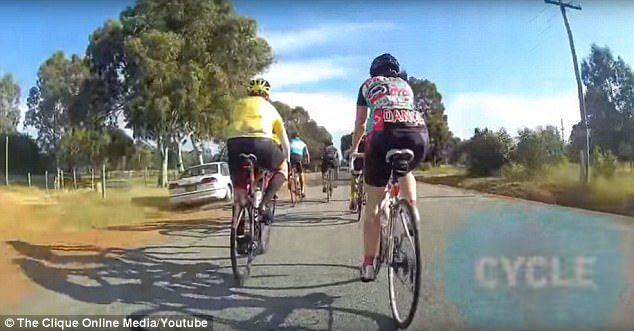 The footage comes after a dangerous incident was recorded on a country road in Western Australia where an incensed driver undertook a group of cyclists, nearly losing control on the dirt.

As the group of riders pass two people on horses, a car can be seen dangerously passing the cyclists, narrowly missing the riders and the animals.

Edward Hore, the president of the Australian Cycling Alliance, told Daily Mail Australia the car had been travelling behind the cyclists for ‘seconds’ before performing the move.

‘He could have killed people, he almost lost control of his car. You can see his back wheels pop up. It’s madness,’ Mr Hore said.