A huge ‘gang fight’ had to be broken apart by police at a bustling shopping centre on Friday afternoon.

Police were called to St Ann’s Shopping Centre in Harrow just before 5.30pm and were faced by more than 50 teenagers who had collected in the entrance hall to the building.

Dozens of officers can be seen trying to disperse the gathering crowds and keeping those involved apart. 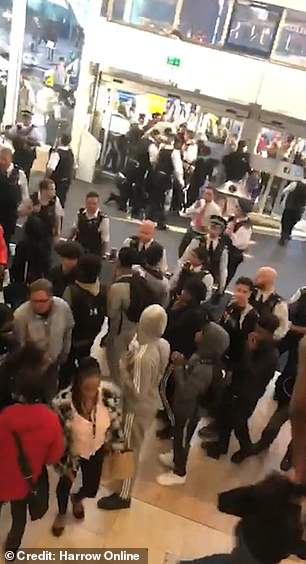 Police were called to St Ann’s Shopping Centre in Harrow after a ‘brawl’ between more than 50 teenagers broke out just before 5.30pm on Friday

One police man can be seen getting out his baton and moving some of the people back, away from the main doors.

A group of around six officers are also shown on the clip standing in a line, apparently trying to stop anyone from brawling again.

Four teenagers were arrested after the incident and two of them – a 17-year-old male and a 16-year-old female have been charged.

‘A large group of approximately 50 teenagers were reported fighting. Officers attended and have dispersed the group, three arrests have been made in relation to the incident.’

A Section 35 Dispersal Zone was also authorised to prevent further offences in the area.

One witness told the Sun they saw 30 to 40 officers on the scene. 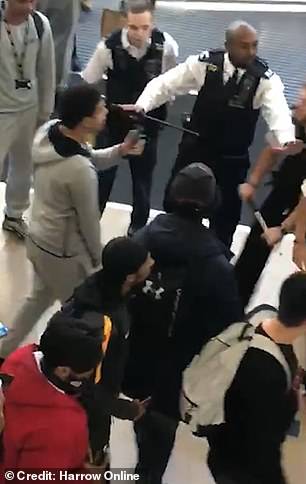 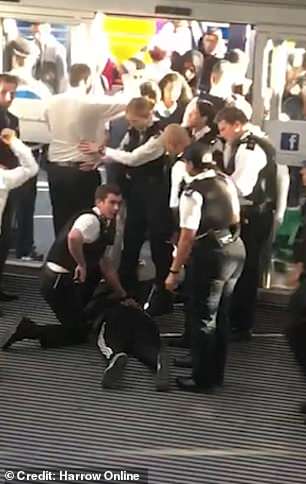 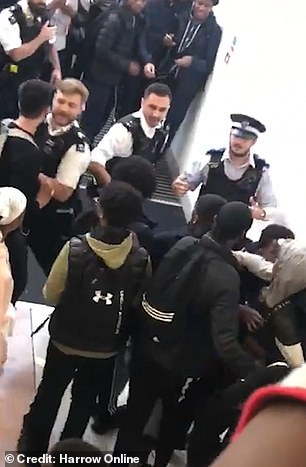 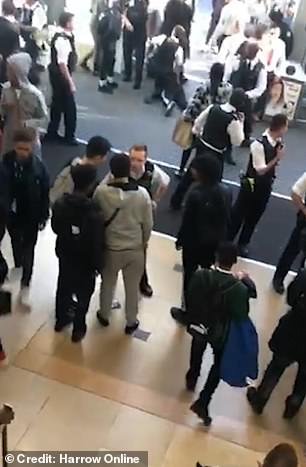 The Met police confirmed four people had been arrested after the incident and two, aged 16 and 17, have been charged

A spokesperson for the Met Police said: ‘Police were called at approximately 17:30hrs on Friday, 28 September to reports of a fight involving a large number of youths at the St Ann’s Shopping Centre in Harrow.

‘Officers attended and the crowd dispersed.

‘A 17-year-old male has been charged with assault by beating; assault on police and obstructing police.

‘A 16-year-old female has been charged with assault by beating; assault on police and possession of class B drugs.

‘Both will appear on bail at Willesden Magistrates’ Court on 17 October.