Four carnival-goers who ‘blacked up’ to look like a Jamaican bobsleigh team have been cleared of racism following a six-month police investigation.

The four men covered themselves in black bodypaint and Lycra bodysuits to dress up as the Jamaican characters from the cult comedy ‘Cool Runnings’.

But the men – who used a bobsleigh made of wood – sparked a police probe after complaints their outfits in the Aberaeron Carnival were racist.

Police took witness statements and quizzed the carnival revellers before eventually deciding there was no case to answer. 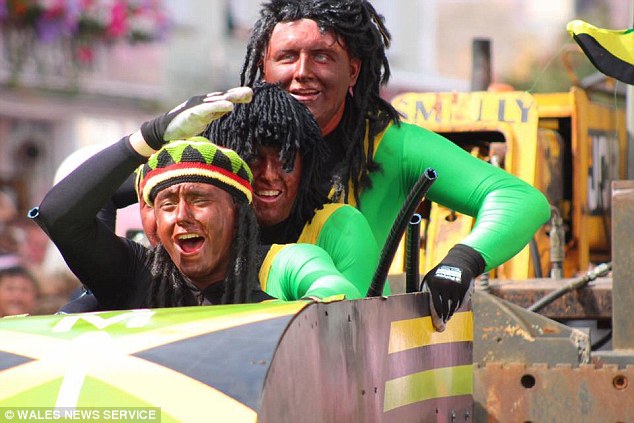 A spokeswoman for Dyfed–Powys Police said: ‘The incident was fully investigated, but no arrests or charges were made.

‘The parties involved have been spoken to, and the people who reported the incident have been updated.’

At the annual August Bank Holiday carnival in the seaside resort of Aberaeron, West Wales, the men sported dreadlock wigs, Rasta hats and waved Jamaican flags as their wooden sleigh was carried on a JCB.

But the decision by organisers to allow the float into the procession provoked fury from the local Labour Party in Ceredigion which described it as ‘racism – pure and simple.’

Dinah Mulholland, the Labour candidate for Ceredigion in the June general election, said: ‘Utterly horrified to see this from Aberaeron carnival. How on earth could this have been considered acceptable, or even legal, by the carnival organisers?

‘There may have been no conscious agenda or racist intent towards involved people of African or Caribbean heritage in the Cool Runnings float.

‘But there is no doubt that offence has been caused and that there is a danger that, unchallenged, such behaviour makes casual racism seem okay.’

She said that blacking up: ‘Continues to be used today to belittle and mock people of colour.’

Jim James, who was visiting Aberaeron and happened to see the float go past, added: ‘I must admit we were a bit shocked. It might have been OK if they hadn’t blacked their faces in my opinion but to do that in this day and age can never be right.’ 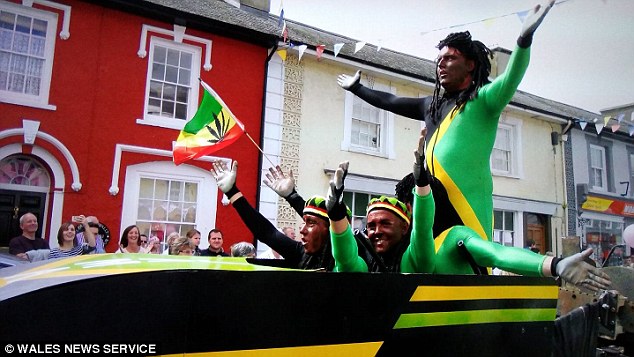 But other residents in Aberaeron backed the carnival revellers and accused Miss Mulholland of ‘overreacting’ and called for her to ‘get a grip’.

Stuart Ramsden said: ‘No offence was meant. Carnivals are supposed to be fun. These guys are just celebrating one of the greatest films of all time.’

Local resident Luke Summerfield added: ‘So are we now living in an era where we can’t dress up as our favourite movie characters? You are creating more of a problem instead of living in harmony.’

The Jamaican Bobsled Team later stepped into the row and defended the Welsh fancy dress revellers.

They said they hoped the incident would help ‘educate people’ and that members of the carnival float had ‘reached out’ to them ‘to offer their apology and insensitivity of wearing “black face”. 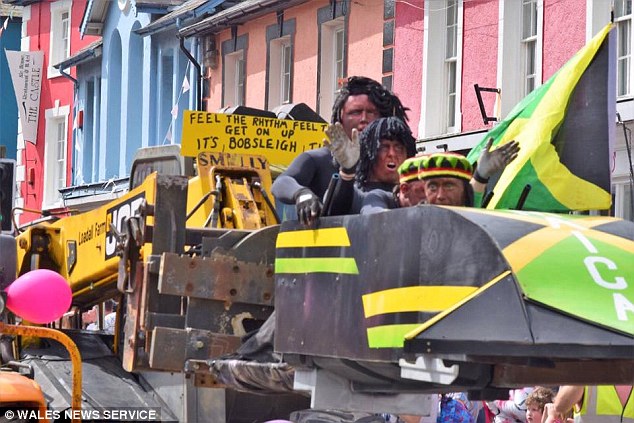 In a statement they said: ‘We like to take these opportunities to educate, rather than vilify. We believe there was no malice intended.

‘We also thank them for their generous donation, in support of our team.’

Cool Runnings is based on the real life story of Jamaica’s first bobsleigh team to compete at the 1988 Winter Olympics.