Two kilos of cocaine, jewellery and high-value watches were found in specially-built ‘hides’ concealed in vehicles.

They were found as part of one of the Metropolitan Police’s largest operations to tackle serious and organised crime.

The raids were made possible after the National Crime Agency and European forces managed to get inside a formerly secure phone system called EncroChat in an operation dubbed Operation Venetic.

EncroChat is a messaging system, which is similar to WhatsApp and is only pre-loaded onto special phones which have to be specially bought.

The Met’s operation has resulted in £13million in cash seized and the arrests of some of London’s most dangerous criminals.

Jewellery, high-value watches and cocaine were found in specially-built ‘hides’ concealed in vehicles

Three hides were found in transit vans used by the suspects arrested as part of the operation.

One of them was built into the floor of the van’s rear and opened by remote control.

Two of the others looked like an electrical generator box that you might see in the back of any tradesman’s van and were covered in tools and other building equipment.

These boxes had complex methods of being opened, the officers discovered during the investigation.

Firstly they had to be powered up using an electrical transformer device and a specially-made key fob was required to engage a hydraulic lock inside the box.

Deputy Assistant Commissioner Graham McNulty said that to conceal drugs, weapons and the proceeds of their crimes, criminals go to great lengths.

He added that officers regularly encounter hides in vehicles and properties.

He said: ‘Some are basic, and some are specially constructed at significant cost to stash away evidence and illegal profits.

‘Our officers instinctively look for evidence in places you wouldn’t think to look and have the knowledge and expertise to gain access to even the most sophisticated hides with complex locking mechanisms. 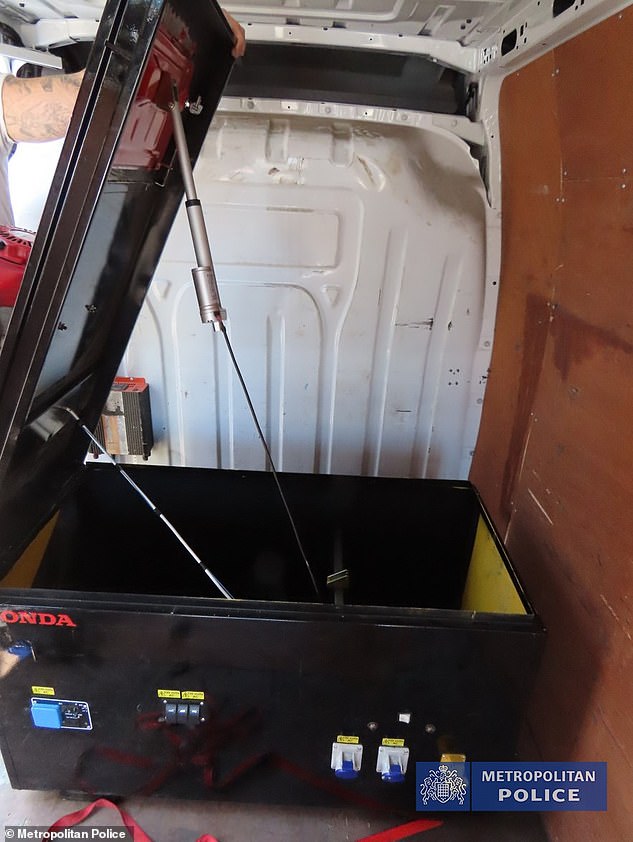 How the secret compartments work

There were three hides found in transit vans used by the suspects arrested as part of the operation.

One was built into the floor of the van’s rear and opened by remote control.

Two of the others looked like an electrical generator box that you might see in the back of any tradesman’s van and were covered in tools and other building equipment.

They had complex methods of being opened, the officers discovered during the investigation.

Firstly they had to be powered up using an electrical transformer device and a specially-made key fob was required to engage a hydraulic lock inside the box.

‘These people think their wealth is untouchable, and the sole motivation for people involved in serious organised crime is money.

‘That is why, as part of these investigations, we will look closely at their finances and use all the resources and legislation available to us to take everything they have obtained using criminal funds away from them, and bring them to justice.’

Criminals paid £1,500 for a six-month contract to use the specially-bought phones and could send a ‘kill code text’ which wiped everything on the customised Android handset.

Investigators found 60,000 users worldwide and around 10,000 users in the UK alone on EncroChat – the sole use was for coordinating and planning the distribution of drugs, guns, dirty cash, money laundering and plots to kill rival criminals.

Top level criminals could be monitored speaking freely about their operations and plans, thinking their network could never be cracked.

One of the Met’s operations seized £5million in one go – which is the force’s largest ever single cash haul.

Commissioner Cressida Dick said: ‘This operation is the most significant activity, certainly in my career, we have ever carried out against serious and organised criminality across London.

‘They have openly discussed plots to murder, launder money, deal drugs and sell firearms capable of causing atrocious scenes in our communities. 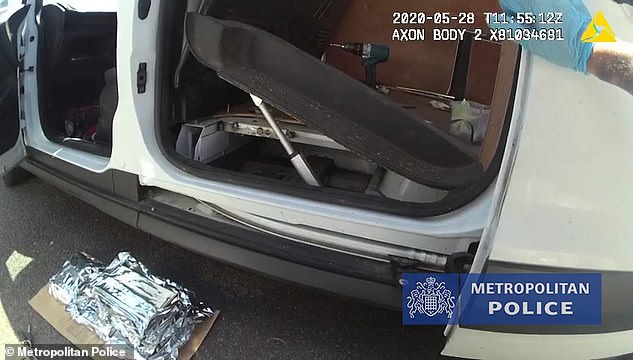 One of them was built into the floor of the van’s rear, and opened by remote control

‘They were brazen and thought they were beyond the reach of the law. Organised crime does not respect geographical boundaries.

‘Those responsible for it adapt quickly and take advantage of every opportunity.

‘This operation has enabled us to target those at the top of the hierarchy and individuals we have known about for years but have not been able to tackle head on.

‘This offending has a direct impact on our communities – those involved appear to have an air of respectability, but their actions leave a trail of misery and are inextricably linked to the violent scenes we see play out on our streets.

‘Our investigators, intelligence analysts, firearms officers, Territorial Support Group and our local officers have worked day and night over the past two months to progress our investigations as part of this operation.

‘Through this work with our international partners, we have significantly developed our understanding of organised criminality in London and the ways in which some of our most prolific and dangerous offenders operate.

What is the ‘EncroChat’ smartphone system used by the mafia to move money, drugs and order murders 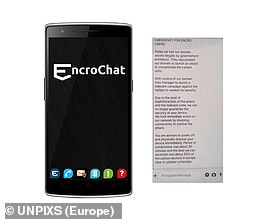 EncroChat was a secret platform where users were able to communicate privately between specially-designed handsets – often to run drugs, traffick people and even order murders.

These devices, costing £1,500, are usually Android-based smartphones that had their GPS sensors, microphones, and cameras stripped out, encrypted chat apps installed by default to allow people to sent private messages.

It is now emerging that criminal syndicates across the world had one – with one in six of the 60,000 users in the UK.

Marketed as the electronic equivalent of two people having a conversation in an empty room, it enabled users to send written messages or make voice calls through an encrypted system.

Investigators say that the platform, which was not in itself illegal, was designed to be secure against unwanted outside access, and in the UK was used purely for criminal purposes.

Since the breach, the Encrochat platform has shut down.

According to the Encrochat website, customers had access to features such as self-destructing messages, that deleted from the recipient’s device after a certain length of time.

There was also panic wipe, where all the data on the device could be deleted by entering a four-digit code from the lock-screen.

The National Crime Agency said the handset could also be wiped remotely.

Encrochat made sure that there was no way to link the SIM or device to the user’s account, and its handsets had no camera, USB data port, GPS or microphone to make them extra secure.

Investigators became aware of the platform in around 2016, but it grew in popularity in the following two years after law enforcement hacked the encrypted Blackberry PGP system.

Before Encrochat, hosted in France, shut down, National Crime Agency deputy director Matt Horne said: ‘We assess there are up to 10,000 people in the UK using the Encrochat platform, and we assess that is completely for criminal purposes.

‘The platform is provided by internationally based individuals, and it allows those people that wish to participate in having one of these devices to have a specially-designed handset, which is hardened against law enforcement forensic techniques.

‘The device has a bespoke operating system, which is designed to frustrate law enforcement’s ability to collect intelligence or evidence from these devices. They utilise an encrypted messaging system in order to communicate between criminals.’