Trains, planes, schools and other public services across France were seriously disrupted Thursday as unions set up dozens of street protests across the country.

Thousands of people have taken to the streets of Paris to call for more investment in public services and to oppose French President Emmanuel Macron’s economic changes.

The Paris protest was mostly peaceful, but localized scuffles broke out between some protesters and riot police using tear gas and water cannons.

Confrontations between some protesters and riot police were also observed in the western city of Nantes.

French railways workers hold banners and flares during a demonstration to protest against French government’s string of reforms. Trains, planes, schools and other public services across France were seriously disrupted

Airport authorities say 30 percent of flights to and from Paris were canceled. National train company SNCF said only 40 percent of high-speed trains and half of regional trains were running.

Some schools and kindergarten were also closed.

The chateau of Versailles was also closed Thursday because of the employees’ strike.

Union leaders said the strikes were a warning to the government.

‘We agree that we need to makes changes to public services, but not to restrain them. To improve them. We need more public servants,’ Philippe Martinez, secretary general of the CGT union, told FranceInfo radio.

Public servants want better wages and are protesting against the planned elimination of 120,000 jobs by 2022, SNCF employees also are rejecting a government plan aimed at adapting the rail company ahead of opening the service to competition. 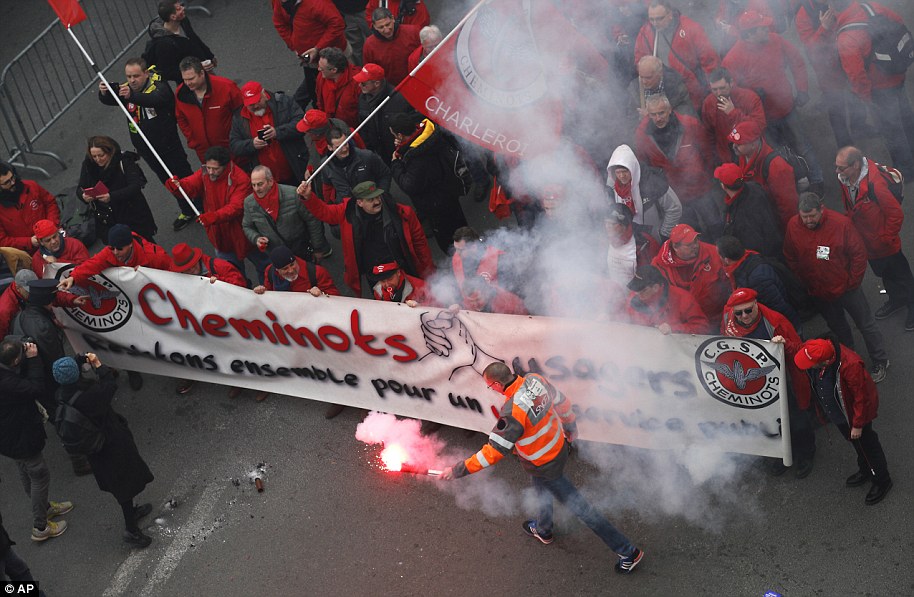 French railway employees burn flares outside Gare de l’Est train station in Paris. Thousands of people have taken to the streets of Paris to call for more investment in public services

‘If we are not heard … there would be calls for strikes and in that case, very few trains would run,’ said Julien Cabanne, a union official who came to Paris to protest.

SNCF unions have scheduled a series of strikes in April, May and June.

The Paris Metro was running normally, but suburban trains were affected by the strike.

Nirman Djeacoumaran, who lives in the Paris suburbs, told The Associated Press there was just one train per hour on his train line.

At Paris Orly airport, passenger Noemie Danican had just learned her EasyJet flight to Toulouse, in southern France, was canceled.