CCTV footage of hammer-wielding robbers bashing a security guard over the head outside Home Bargains has emerged.

A cash-in-transit driver was violently attacked on Ashton Old Road, in Clayton, Manchester, shortly after 2.20pm on Monday 3 December 2018.

After returning from the store to his delivery vehicle, the driver was bludgeoned over by two men carrying hammers.

Escaping with a case of cash, the offenders quickly climbed into their grey Audi A3 and drove off towards Ashton. 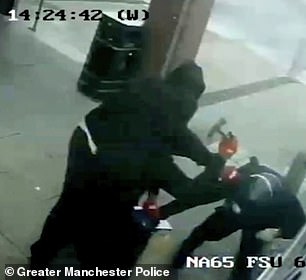 CCTV footage shows a cash-in-transit driver being ambushed by town men and hit over the head by hammer outside Home Bargain in Clayton, Manchester

Fortunately, the driver was wearing a helmet so escaped uninjured from the beating.

Detectives investigating the crime have released CCTV footage and are appealing for the public’s help to trace the offenders.

Detective Constable Jamie Heaton of Greater Manchester Police’s City of Manchester Division said: ‘This was a shocking and brazen attack on a man in broad daylight.

‘Had he not been wearing safety clothing and a helmet, the consequences could have been much more severe. 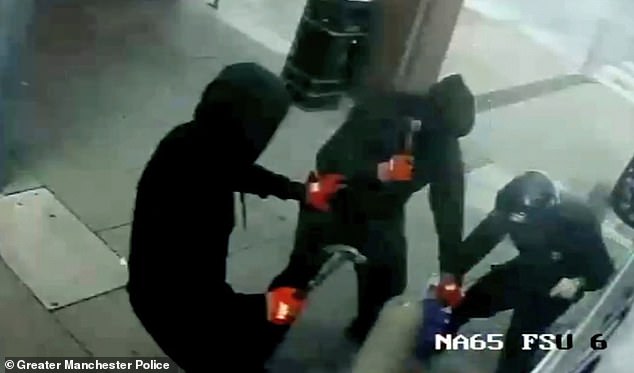 After returning from the store to his delivery vehicle, the driver is bludgeoned over the head by two men

‘Thankfully, the man was uninjured, but the psychological impact of crimes such as this should not be underestimated.

‘Do you recognise the attackers in this footage or have any information that can assist our enquiries?

‘Perhaps you saw a car matching the description in the vicinity shortly before or after the incident.

‘Even the smallest piece of information can often help police solve crimes like this.

‘If you know something – please get in touch immediately.’ 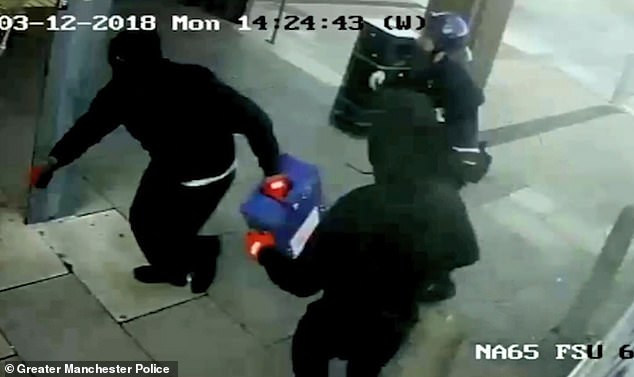