Police have stopped 18,500 passengers for not wearing masks but only handed out 59 fines so far

Police and transport officers have fined just 59 people after speaking to 18,500 for not wearing masks on public transport, Sadiq Khan has revealed as he claimed he hasn’t spoken to the Prime Minister since May.

Speaking on Good Morning Britain, the Mayor of London claimed he hadn’t spoken to Boris Johnson since a Cobra meeting on May 10.

The two figures met several times at Cobra meetings in the first months of the coronavirus pandemic, but there has been no contact since lockdown measures were first eased in England.

In normal circumstances, it would not be unusual for the Mayor of London and the Prime Minister to go without speaking for two months, City Hall told MailOnline.

A spokesman for the mayor said: ‘But in times of crisis you would expect to have a closer working relationship.’

Boris Johnson met with London Ambulance Service paramedics on Monday, but has not seen the Mayor of London for more than two months

Mr Khan said: ‘One of my concerns is that it’s led to some poor decision-making some of the decisions and policy that PM has can’t be properly tested in a private space where there can be candor.

‘That leads to group thinking which I think has led to some poor decision making.’

Mr Khan said he had lobbied the PM on occasions since they last met, more than two months ago.

He added: ‘My concern isn’t because of vanity, it’s because I’m the mayor of a city with more than 9million people.

‘It’s for the Prime Minister to explain why that is, I hope its’s not because he’s playing petty party politics. 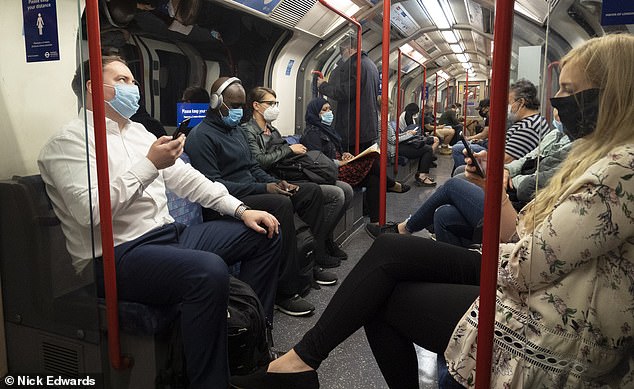 ‘If the government is keen for a recovery to be successful they’ve really got to be working with us because it’s got to be a team effort.’

Mr Khan’s comments came ahead of new rules, starting from next Friday, that make it mandatory to wear face masks must be worn in shops – but Mr Khan revealed that just 59 people had been fined for not following similar rules on board public transport in the capital. 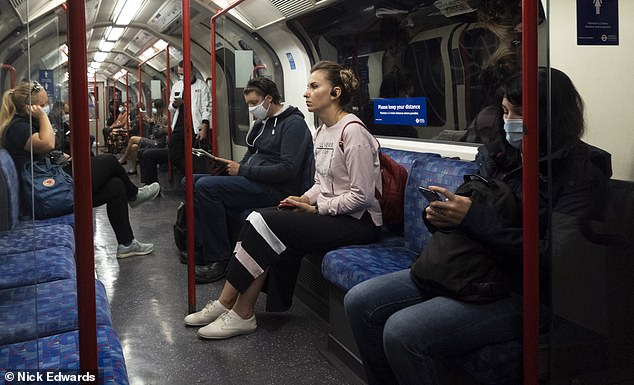 Sadiq Khan said around 90 per cent of passengers are wearing some kind of covering on their face, but some are still choosing not to. Exemptions are in place for children and people with certain physical or mental health conditions

Mr Khan told presenters Ben Shephard and Kate Garraway: ‘On public transport we’ve had to issue very few fines, only 59, but a combination of British Transport Police and Transport for London enforce officers have encouraged people to wear face coverings.

‘The good news is during rush hour more than 90 per cent of commuters are wearing face coverings.

The government made it mandatory to wear face coverings on public transport from June 15.

Most commuters on the Central Line were wearing some kind of covering this morning, but there are still passengers travelling with their mouths and noses exposed.

Police appeared to step up patrols on face masks, with a large presence near Westminster station being reported by commuters. 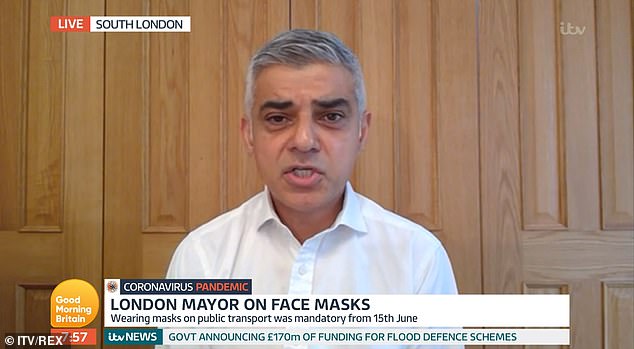 Sadiq Khan revealed just 59 people had been fined on London’s public transport for failing to wear face coverings, while also revealing he hadn’t spoken to the Prime Minister since May 10

Shoppers who fail to comply with new rules from July 24 risk fines of £100 under the plans to stop a second wave of coronavirus.

Retailers will be asked to advise customers to wear masks but their staff will not be expected to enforce the law. Instead, police will be given powers to dish out fines.

Only young children or those with certain disabilities will be exempt from the new regulations.

Mr Khan said he didn’t want to see members of the public ‘taking the law into their own hands’. 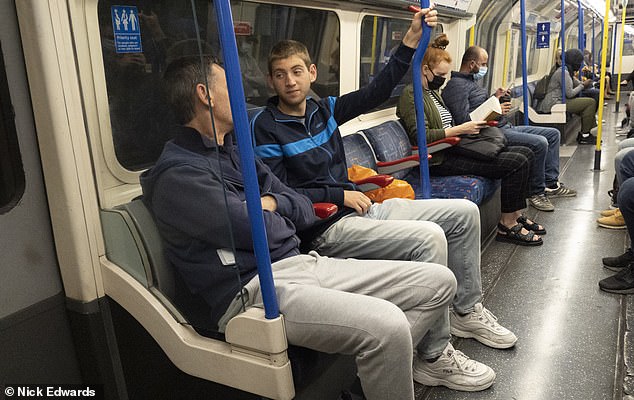 Some people are still not wearing face masks on London’s public transport, ahead of new rules that will make it compulsory to wear coverings in shops and indoor spaces from next Friday

He said: ‘What we don’t want is unfair peer pressure where its unjustified for example; children under 11, people with breathing problems people who may have some mental health issues so its really important that we are respectful of the reason why not 100 per cent of people are wearing face coverings.

‘Don’t be alarmed at this new rule, I wish it was being brought in today rather than next Friday, this will help all of is be safer and could prevent a second wave that could have led to a second lockdown, which none of us want.’

Mr Khan’s comments came after he revealed he had not spoken to Boris Johnson,  a former of Mayor of London himself, since a Cobra meeting on May 10.

That was the same day the PM started to ease lockdown measures in England and changes the nation’s Covid-19 messaging from Stay at Home to Stay Alert.