A Bondi identity who wants police horses banned from the beachfront says the animals covered the promenade in manure on Australia Day, deterring international tourists.

Dimitri Moskovich, one of the suburb’s most recognisable citizens, has renewed his campaign to rid Bondi of mounted police, claiming they treat the national icon as a ‘horse toilet’.

Speedo-wearing Mr Moskovich works out every day at one of Sydney’s most famous landmarks and is fed up with the sight of horse droppings on the beach.

The 54-year-old has launched his latest call for action on social media accompanied by pictures of horse droppings befouling the promenade on January 26.

‘What a Fabulous Greeting! Thank you everybody on The Police Force For Such a Considerate Gesture!’

Mr Moskovich then addressed the police commissioner and commander of the New South Wales Mounted Police Unit, hoping his message would reach them.

‘The Bondi Beach promenade has been covered in horse manure for most of Australia Day,’ he wrote.

‘If you can not adjust your police procedures and stop sending horses to the beach, make an effort in managing their s***, please. 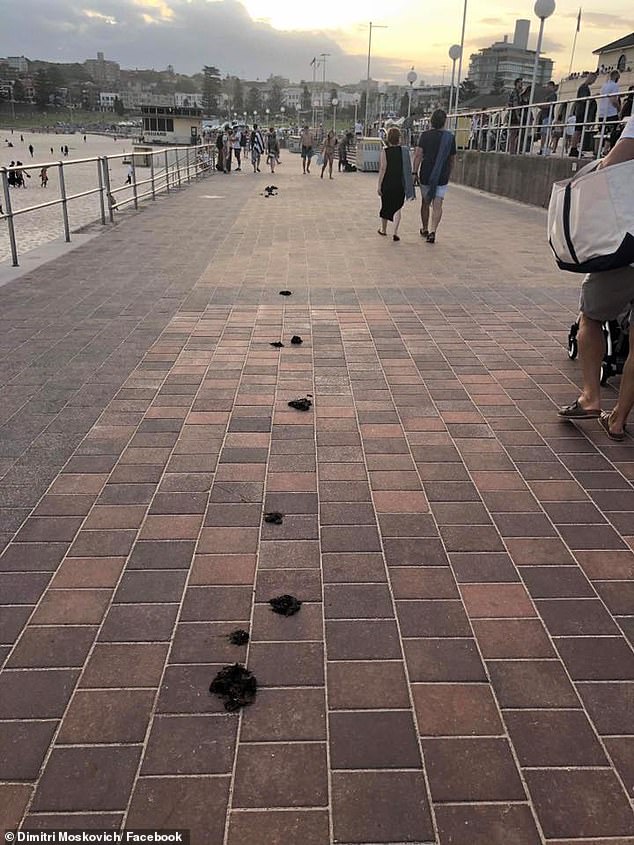 A Bondi identity wants police horses banned from the beachfront after the animals covered the promenade in manure on Australia Day (pictured).  Dimitri Moskovich, who works out at Bondi for up to six hours a day, claims mounted police use the national icon as a ‘horse toilet’ 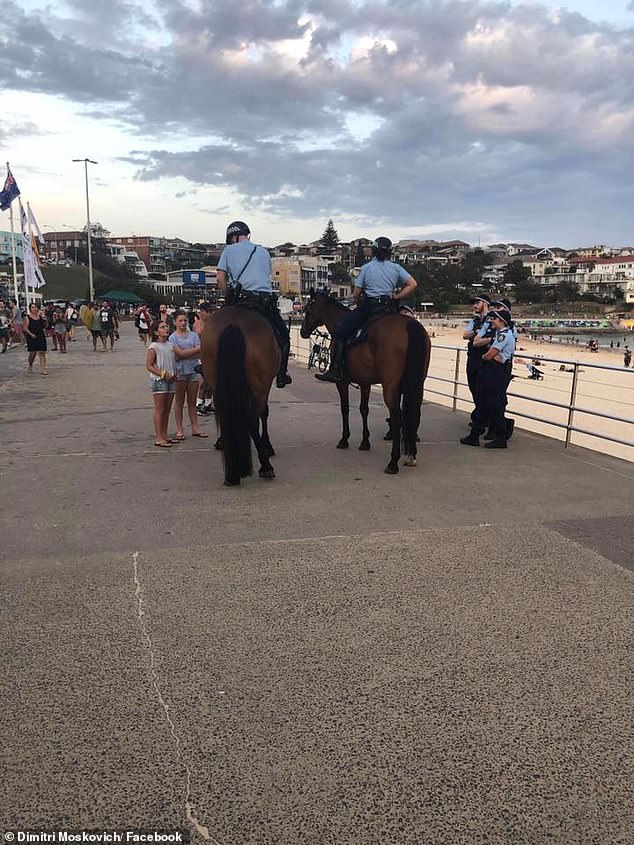 Mr Moskovich wrote on Facebook that ‘Bondi Beach promenade has been covered in horse manure for most of Australia Day.’ Pictured are horses on promenade on January 26

Russian-born fitness fanatic Dimitri Moskovich has been photographed voting in polling booths on election days wearing only his Speedos. He considers Bondi Beach his ‘office’

‘If you need somebody with brain to work out the logistic of the process, i am happy to assist.

‘Today you had more police than visitors on the Beach. So just appoint one as a horse s***t manager and he or she can coordinate with the Council to get the s*** cleaned immediately.

‘It is an absolute disgrace to have an Australian Icon on Australia Day covered in Australian Police horse s***!’

Mr Moskovich’s message received some support from his Facebook friends.

‘Well said!’ one wrote. ‘It is such a useless exercise! It serves no purpose to have mounted Police at Bondi Beach!’

Another responded: ‘There really is no need to deploy mounted police to the Beach given the abundance of vehicles in their inventory which are literally purchased for use on the beach and off road settings. It’s idiotic.’

A third said: ‘I have seen the horses wear bags to catch the s***t. Why don’t the police riding the horses call the ranger to come clean it up when it happens.’

Some disagreed. ‘Lmao, grab it for your garden and scoop it up,’ one dissenter wrote. ‘Stop complaining about organic waste, pack of whingers.’ 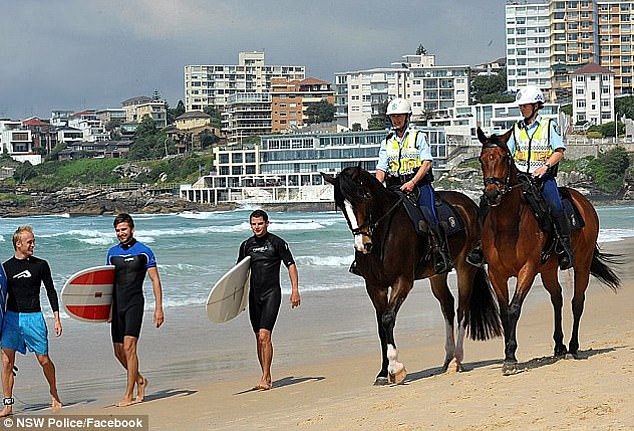 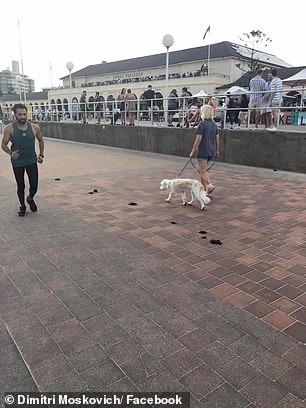 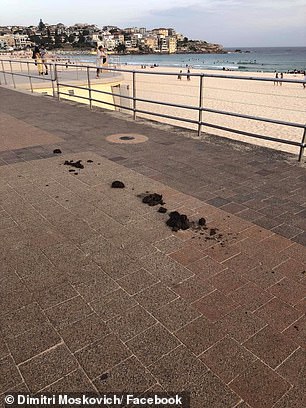 Mr Moskovich has been trying to get police horses banned from Bondi for years, once confronting then prime minister Malcolm Turnbull at the beach.

Mr Moskovich has previously told Daily Mail Australia he complained about the horses to individual mounted officers, then Waverley Council, before taking it up with the prime minister.

‘There is no reason for Bondi Beach, which is a national icon, to become a horse toilet,’ he said. 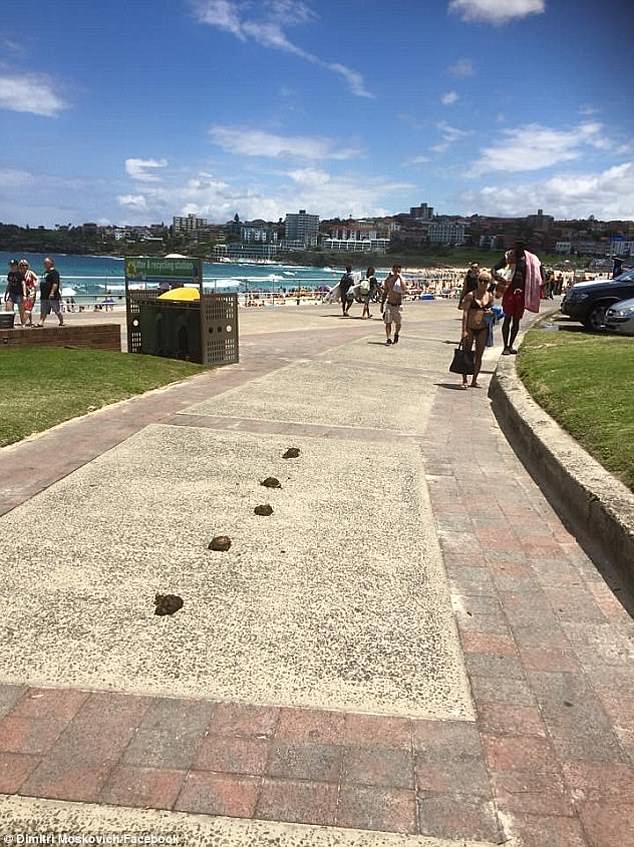 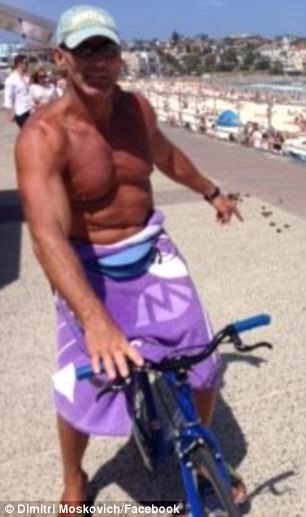 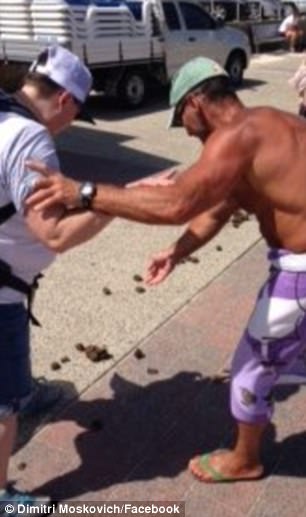 ‘Every time it’s like an assault. It’s a violation. I feel like somebody spits in my face.’

Mr Moskovich, a property investor who can be found exercising at Bondi up to six hours a day, said he often had to warn tourists about the horse-made hazard on the promenade.

‘It doesn’t even occur to them that they can walk along Bondi promenade and they can walk in a huge heap of horse s***,’ he said. ‘It’s just wrong.’

‘I’ve seen it on the sand as well but most of the time it’s on the promenade.’ 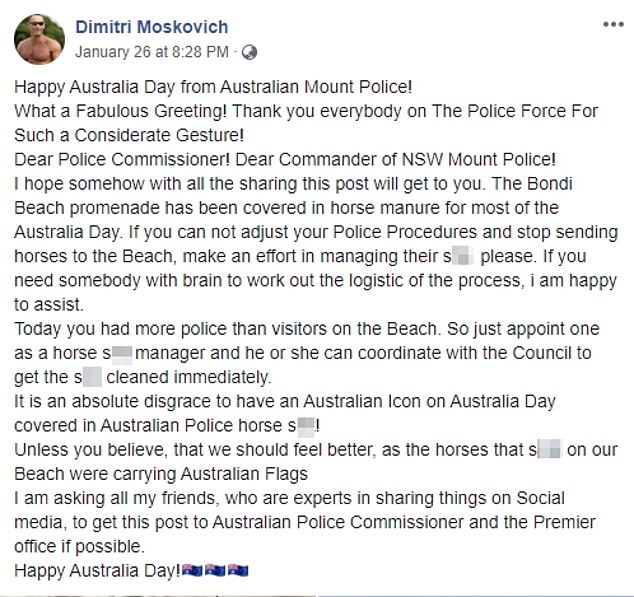 The Russian-born fitness fanatic, who has been pictured voting in polling booths on election days wearing only his Speedos, considers Bondi Beach his office.

POLICE HORSES CAN DEFECATE ON ROADS

There are no specific offences relating to the rider of a horse being liable, criminally or otherwise, should the horse being ridden defecate on a road or in a public place.

There are no Acts or Regulations involving horses and manure, whether under the Local Government Act, Companion Animals Act or even the Australian Road Rules. (Under the Australian road rules, horses are regarded as vehicles).

An offence could occur if a local council had an ordinance in place relating to the riding of horses or restricted/specific use of an area.

If there was such an ordinance in place and there had been no exemption given to police horses by the council, then any horse riding or use of the area by police on horses would be deemed in contravention of that ordinance.

This would constitute an offence under s 632 of the Local Government Act.

‘If somebody is using your backyard or your balcony as a toilet you would get upset,’ he said. ‘It’s really upsetting.’

A New South Wales Police Force spokeswoman said the mounted patrols at Bondi were a useful crime-fighting tool which had wide support.

‘The NSW Mounted Police horses are utilised for operational policing and as such are deemed to be on duty and working, whether walking on the roadway, footpath or on beaches etc,’ the spokeswoman said.

‘They venture down on the sand and promenade as that is where they are most visible by the majority of people and the most interaction takes place.

‘This also provides a vantage point, by utilising the height advantage from a horse, to identify any criminal activity.

‘The Mounted Unit patrols of Bondi are for a few hours at most once a week and they receive a great deal of community support whilst present.’

The spokeswoman said bags fitted to collect droppings from horses were designed purely for animals in transit – on trucks, floats, planes and other means of transport – or when stabled.

‘They are not designed to be worn whilst the horses are in motion, therefore they are incompatible with duties of the Mounted Police.’ 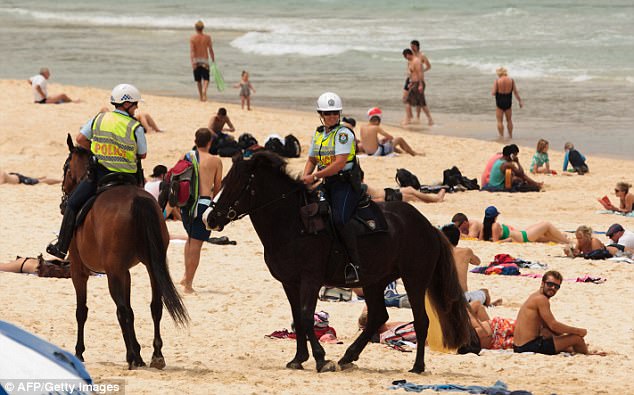 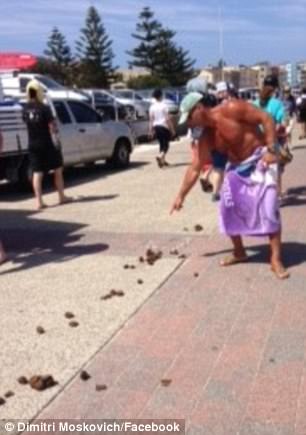 Mr Moskovich said a senior mounted unit officer told him that because horses were herbivores their droppings were not particularly offensive.

‘If I’m a vegetarian would you be OK if I s**t in the middle of your living room?’ Mr Moskovich said.

Mr Moskovich made headlines six years ago in a rope climbing accident at the beach when he fell seven metres while distracted by the sight of a ‘very nice topless girl’. He suffered 20 fractures to both legs. 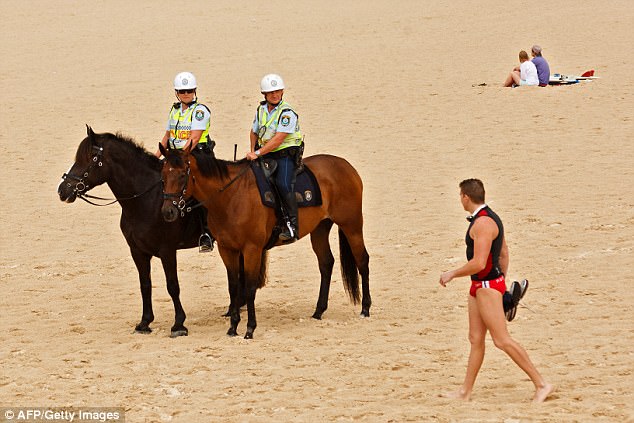