Police are today hunting for a violent black cab driver accused of braking hard to knock out a passenger before dragging him out and dumping him on the pavement.

Scotland Yard has released a CCTV still of the suspect wanted over the assault in the back of his taxi in central London on May 17 at 1.15am.

Footage of the incident surfaced online and shows the man in the back remonstrating with the driver during a swearing-laden clash about the fare.

The passenger, who is said to want to go to Sevenoaks in Kent, can be heard saying: ‘F*****g hell mate – I’m a southerner’ as the cab travels north across London Bridge.

As the row explodes the wanted man yells back: ‘Mate listen, shut your f*****g mouth – I’ve done it for a set price’ before slamming on the brakes of his Mercedes Vito.

The victim flies head-first into the partition and seats in front and is briefly knocked out as the driver is heard saying: ‘F*****g idiot’. 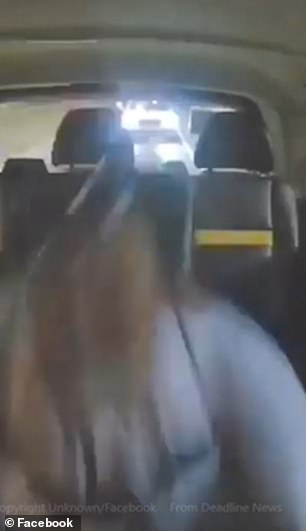 The cabbie is then seen walking around and opening the door, as he apparently drags the man on to the pavement on King William Street, close to Monument station.

Extraordinarily, seconds later, a new passenger taps on the window and asks to for lift to Euston station and the the taxi driver replies calmly: ‘Yeah alright mate’.

Footage of the incident, captured by the assailant’s own CCTV camera, emerged on Facebook amid rumours the driver had wanted to shame his customer over his behaviour.

The video has been shared more than 3,500 times on Facebook, where some cite it as an example of why people should not start shouting at cab drivers.

The majority who commented said the passenger got what what he deserved after being so abusive to the driver.

But other viewers however branded the driver irresponsible, saying his actions were tantamount to assault and he should lose his licence. 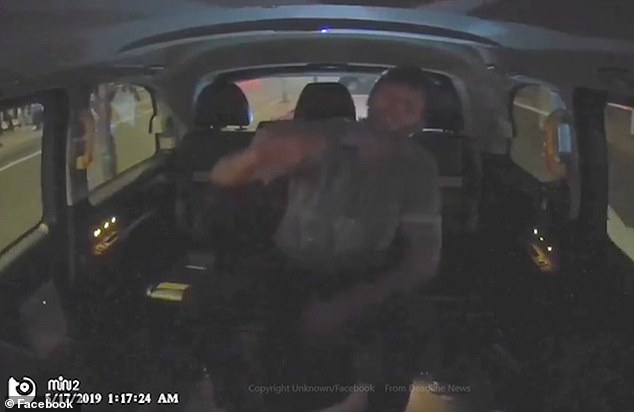 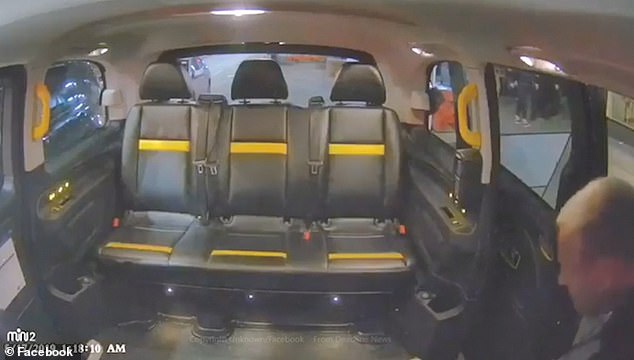 After the man is thrown forward, he disappears from view, and the driver appears to drag him out of the car and onto the pavement 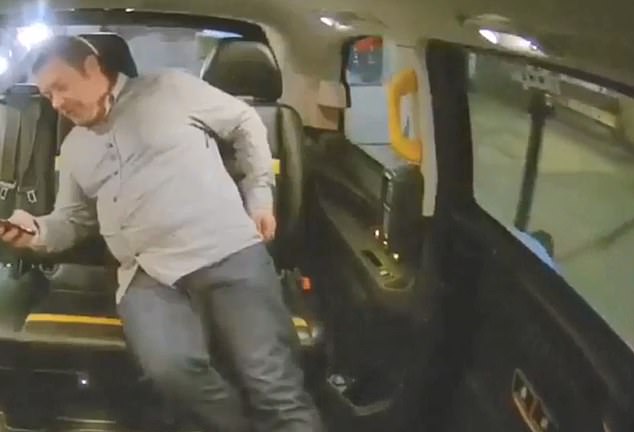 As the cab pulls away with a new passenger, the previous passenger is visible on the pavement

And today the Met launched an appeal to find the driver, who faces arrest.

PC Phil Hastings, who is investigating, said: ‘Although I have now made contact with the injured passenger, we still need to hear from anyone who witnessed the incident. I would also urge the driver and the second passenger, who approached the taxi after the assault, to come forward and speak with us.’

Any witnesses, or anyone with information that could identify the driver of the taxi is asked to call police on 101 or contact via Twitter @MetCC quote 2712802/19.

To give information anonymously contact the independent charity Crimestoppers on 0800 555 111 or online at crimestoppers-uk.org.