Police are hunting for a man and woman suspected of fatally stabbing a man at a metro station in Washington, DC.

Officers responded to a call about the stabbing at Union Station at around 8.30am Sunday.

The male victim, who has not been publicly identified, was pronounced dead at the scene.

A search is now underway for two suspects, a white man and a black woman, both believed to be in their 20s.

Police are hunting for a man and woman suspected of fatally stabbing a man at Union Station  in Washington, DC, on Sunday morning. Investigators are pictured at the scene

The DC Police Department tweeted descriptions of the suspects, a black woman and a white man who are both believed to be in their 20s

Police have yet to release photos of the suspects but said the female was wearing a brown jacket, blue jeans and brown boots, and the male was wearing a denim bandana, a dark jacket and was carrying a black bag with white stripes.

The stabbing reportedly took place at a ticketing area near the entrance to the metro station.

It was not immediately clear how the suspects fled the scene, which has been taped off by police.

Red Line train service has been suspended amid the ongoing investigation, according to Metro officials.

Another police investigation was reported at Gallery Place, which is just two stops from Union Station on the Red Line, around the same time Sunday morning.

That investigation has concluded and police have not said if it was related to the Union Station stabbing. 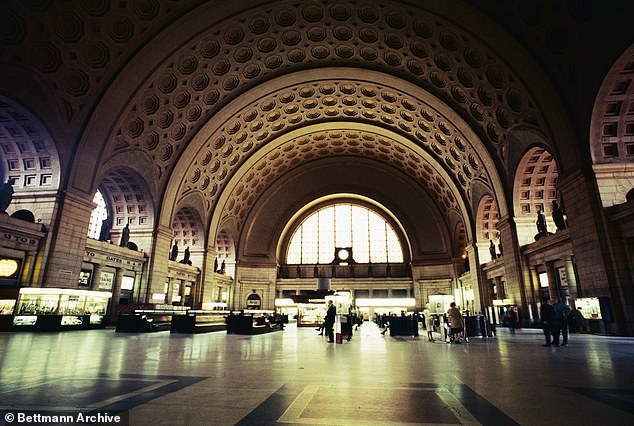