Police have launched a manhunt for a paedophile who molested a young boy in his own bedroom.

The man is said to have struck in the early hours of Saturday.

Detectives have issued a CCTV still of a suspect and have urged anyone who recognises him to call police immediately.

Police patrols have been stepped up in the area in the wake of the attack.

Officers were called at around 12.20am to the victim’s home in Ickenham in London following a report that a man had ‘gained entry’ before sexually assaulting a young boy in his bedroom.

There was no evidence of forced entry, according to detectives.

Detectives say the suspect fled after the child told him that he would phone the police.

‘Police are very concerned and we are carrying out an extensive and well-resourced investigation.

‘We are appealing for the public’s help to identify a man who was seen running from the area shortly after the assault. It is vital that we speak to him to establish why he was in the vicinity.’

She added: ‘Whilst incidents such as this are thankfully very rare, I would encourage people to ensure that their homes are kept secure at all times and to report anyone acting suspiciously.’ 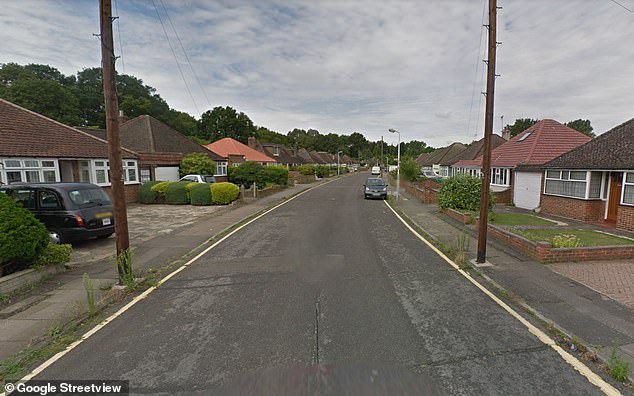 Officers were called at around 12.20am to the victim’s home on The Greenway, Ickenham in London following a report that a man had ‘gained entry’ before sexually assaulting a young boy in his bedroom. Pictured: The Greenway in Ickenham

The suspect was described as white, of slim build with short hair and a beard. He was wearing blue jeans and a T-shirt.

There have been no arrests and enquiries continue.

The child is being supported by specially trained officers, but police are not confirming his age in order to protect his identity.

Detective Chief Inspector Natalie Norris, from the West Area Command Unit, said: ‘We fully recognise how concerned our community will be after an incident like this.

‘For this reason we have patrols in the area and we are working with partners and keeping them informed. Together we are doing all we can to support the family and all those affected.’

She added: ‘This is a horrible incident and thankfully rare, but my officers are working incredibly hard to find the person responsible.’