Detectives are thought to be hunting a ‘psychopathic’ hitman who killed and dismembered a 17-year-old Irish boy as part of a years-long feud between two rival drugs gangs.

Teenager Keane Mulready-Woods is thought to have been killed at a house in the town of Drogheda overnight Sunday before his body parts were dumped in two areas around Dublin late Monday and early Wednesday as a warning to others.

Investigators are believed to be working on the theory that Mr Mulready-Woods was murdered in revenge for the gangland slaying of Richie Carberry in November last year, the Irish Independent reports.

Keane Mulready-Woods, 17, went missing on Sunday in the town of Drogheda before his body parts were found dumped at two locations in Dublin late Monday and early Wednesday 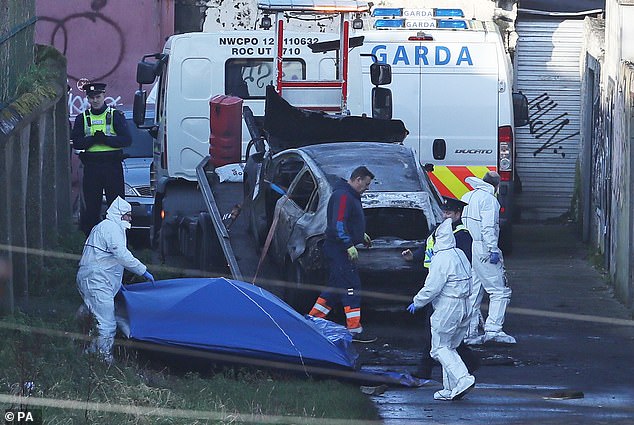 A burning car with the teen’s severed head in the boot was discovered at 1.30am Wednesday in the Drumcondra area of Dublin

Carberry, 39, was shot multiple times as he closed the gate outside his home in Bettystown, County Meath, having survived a previous hit in March.

Police are investigating the possibility that Mr Mulready-Woods was murdered because he had links to Carberry’s killers.

The main suspect is reported to be a notorious 35-year-old north Dublin hitman, described as a ‘psychopath’ and a ‘serial killer’ by officers.

It is thought that the gang responsible for killing Carberry had also made threats against youngsters, prompting the hitman to target a teenager in return.

Violence between the two Drogheda drugs gangs has been steadily escalating since July 2018, when a dealer was shot and paralysed in the town. 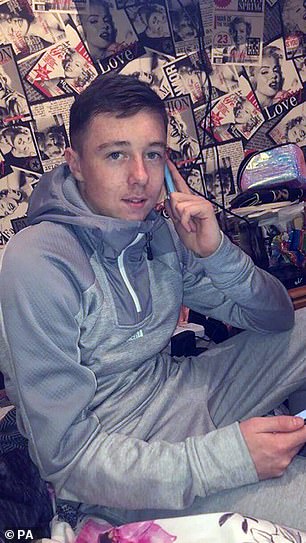 That was followed by a series of non-fatal shootings, petrol bombings, and beatings spread across Meath and Louth counties before the fatal shooting of Carberry.

Mr Mulready-Woods’ killing marks a significant escalation in violence, which shows no sign of abating despite extra police resources allocated to tackle it.

A taxi driver who is thought to have been carrying a well-known gang member in the front seat of his car was shot around 6.20pm in Drogheda – just hours before Mr Mulready-Woods’s remains were discovered.

While the passenger is known to be linked to the drugs feud, it is unclear whether the shooting was directly related to Mr Mulready-Woods’s murder.

A video showing a man dressed in a balaclava and threatening to kill the hitman has also appeared online, the Independent reported.

The person in the video is believed to be the son of another murder victim.

Meanwhile a house in Drogheda where Mr Mulready-Woods is thought to have been killed remained taped off on Thursday as forensic examinations continued.

The property has been declared a crime scene and blood has been found inside, the Irish Times reports.

Officers believe Mr Mulready-Woods was taken to the house and attacked there, with his body parts then dumped in public as a warning to other gangsters.

The boy’s limbs were found inside a black Puma sports bag dumped in the Coolock area of Dublin around 10pm Monday. Children found the bag.

The discovery was made a short time after police received intelligence that Mr Mulready-Woods had been murdered.

Fire crews were then called to reports of a burning vehicle in the Drumcondra area of Dublin around 1.30am Wednesday, and found more body parts inside.

It is thought the teenager’s severed head was found in the boot of the car, which was recognisable because it had been left untouched during the murder.

DNA tests subsequently confirmed that the limbs belonged to Mr Mulready-Woods, and while additional tests on the remains in the car have yet to come back, there is little doubt they belong to the teenager.

As tests confirmed Mr Mulready-Woods had been murdered, a Garda spokesman said: ‘Keane is a 17-year-old juvenile, he disappeared on Sunday, January 12 and parts of his remains have now been discovered.

‘This is a brutal and savage attack on a child and is completely unacceptable in any normal democratic society.

‘The level of violence is shocking and the investigation into the murder of Keane is being co-ordinated from Drogheda Garda Station. 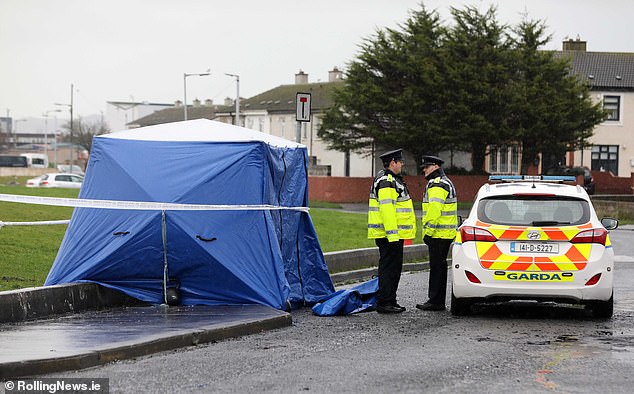 Limbs found stuffed into a black Puma sports bag in the Coolock area of Dublin (scene, pictured) have been confirmed as belonging to Mulready-Woods 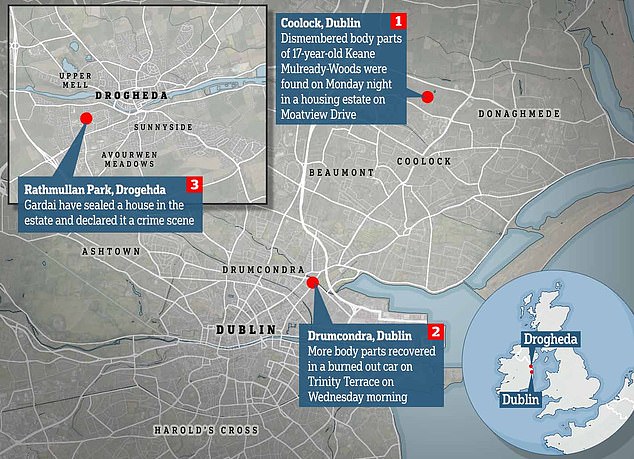 ‘It is important to remember that Keane was a child, a young boy, trying to find his way in life, he has now lost his life and his family have lost their loved son and brother.’

When last seen by his family in Drogheda, Co Louth – approximately 30 miles from where his body parts were found – he was wearing a navy Hugo Boss tracksuit, black Hugo Boss runners, a red Canada Goose jacket and a Gucci baseball cap.

Garda Deputy Commissioner John Twomey said: ‘An Garda Siochana is determined to bring those behind this shocking crime to justice.

‘In recent years An Garda Siochana has made significant progress in tackling organised crime through arrests leading to convictions and major seizures of guns, drugs and cash.

‘This focus will continue. As always, the help and support of communities is vital to this.’

Fine Gael’s Paschal Donohoe said: ‘I want to acknowledge that within my own constituency I do have experience of the cycle of terror, of the cycle of fear that organised crime can bring.

‘This is the reason why minister Charlie Flanagan has ensured we are recruiting 700 gardai per year and it’s the reason we’ve resourced the armed emergency unit to make sure they have the capacity to respond back to organised crime.

‘In my own constituency of Dublin Central, we have seen the ability of those kinds of changes, combined with community investment, to deal with the kind of terror.’