A ‘despicable’ thief stole parcels from the home of two doctors while they treated patients during the coronavirus pandemic.

Dr Ben Noble, a GP from Attenborough, Nottinghamshire, received a call from his wife Hannah, also a GP who was working from home, telling him that four parcels had been taken from their home in Shady Lane.

The father-of-two was working as a duty doctor at the Woodbrook Medical Centre, in Loughborough, when the thief struck.

Four parcels containing drink were stolen from Dr Ben Noble’s doorstep in Attenborough, Nottinghamshire, while he and his wife were working to treat patients during the coronavirus pandemic 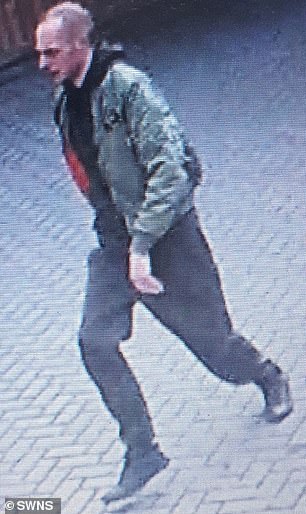 Police released a CCTV image of the suspected thief

He said: ‘It’s incredulous that someone would steal parcels from your doorstep and what’s even more galling is that it happened in broad daylight.

‘At the time the parcels were delivered my wife was on the phone trying to help a mentally unwell patient, hence why she didn’t bring the parcels in.

‘It’s just so bad that someone could do such a thing during these difficult times.’

Police released a CCTV image of the suspected crook who stole the parcels which contained bottles of drink which were dumped nearby.

‘It’s appalling to think that during the Covid-19 crisis some people are still seeking and taking opportunities to commit crime and cause unnecessary stress on people in what is already a difficult time.

‘I’m appealing for anyone who recognises the man in the CCTV image to please come forward.’