Cops never came when a gunman fired a shot that narrowly missed 33-year-old Shatavia Walls on July 4, hours after she confronted young men setting off fireworks near a Brooklyn jungle gym where children were playing, family and friends told DailyMail.com.

Three days later members of the same group of ‘gangbangers’ returned and shot her dead just feet from the same playground in the Louis Heaton Pink Houses public housing complex in East New York, they said.

The killer or killers remain on the loose more than two weeks after the fatal shooting.

‘Not only am I hurt, I’m mad,’ said Erica Lee, 33, Walls’ best friend who was sitting in the same courtyard where the violence unfolded. ‘Nobody wants war, we want justice and I feel police aren’t doing their job. I’ve barely seen them around here since the night she was killed.

‘It’s nothing like when that one-year-old baby was shot and police held press conferences calling the case their highest priority,’ Lee said, referring to the killing of little Davell Gardner in Brooklyn July 12, followed by an arrest July 16.

‘Every case deserves the same attention. Everybody should be treated equally. These killers, if they feel like they’re getting away with it, they’ll do it again,’ Lee said.

Shatavia Walls, 33, died from being shot at eight times on July 7 after she asked a group of people to stop setting off fireworks near a playground three days prior. DailyMail.com can reveal that police were called three days earlier when Walls was shot at, but they never responded 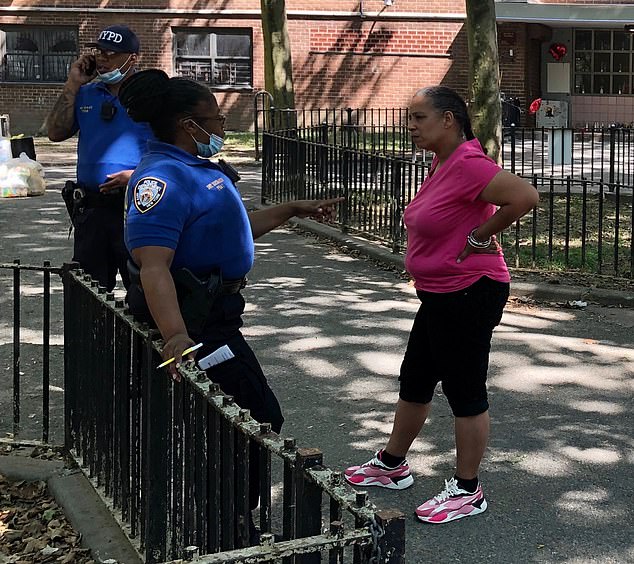 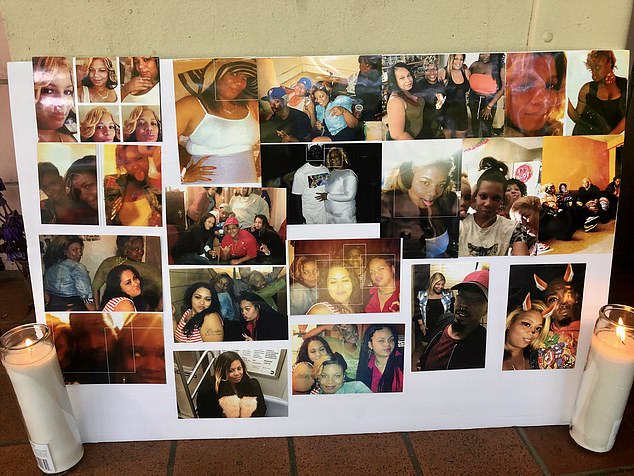 Testagros said she’s praying that police make an arrest before her daughter’s burial. Pictured is a vigil set up in honor of Walls

Helen Testagros, Walls’ mother who lives at the Pink Houses, sat beside Lee on a bench beside the playground on the sweltering afternoon this week. She was constantly interrupted by phone calls as she worked out details of her daughter’s funeral, set for August 3.

Testagros said she’s praying that police make an arrest before her daughter’s burial, but added, ‘I know these cops have a lot of work to do with all the shootings out there.’

Police and politicians blame the shootings surge on everything from the coronavirus to protests and criminal justice reforms. But people close to Walls say it all started with the young woman’s decision to confront a group of people setting off illegal fireworks.

Testagros said her daughter was following the advice of Brooklyn Borough President Eric Adams, who last month urged residents to ‘go talk to the young people or the people on your block who are using fireworks’ instead of calling 911 or 311.

Testagros was in the courtyard as her daughter, who lives in another part of Brooklyn, was playing with her niece and other children. The young men were setting off firecrackers including military-grade M-80s.

‘These little kids, they were 4, 5, 6, and they were getting hysterical, so we asked them, ”Can you please stop doing the fireworks,”’ Testagros recalled. ‘They were being rude and disrespectful, hoodlums. At the time, I didn’t know they were a gang. I thought they were regular boys in the neighborhood.’ 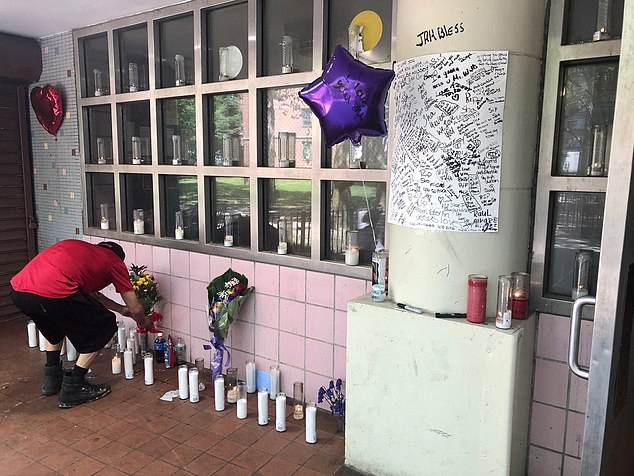 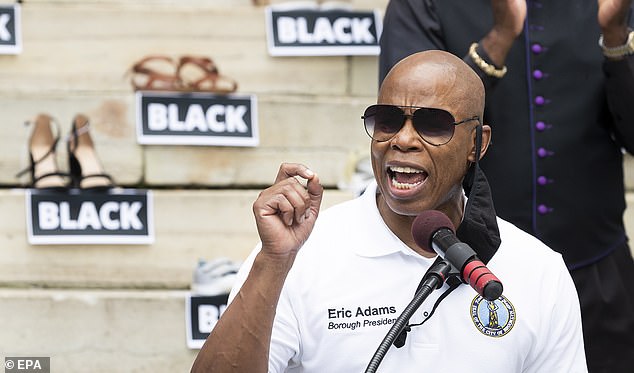 Testagros said her daughter was following the advice of Brooklyn Borough President Eric Adams (pictured), who last month urged residents to ‘go talk to the young people or the people on your block who are using fireworks’ instead of calling 911 or 311 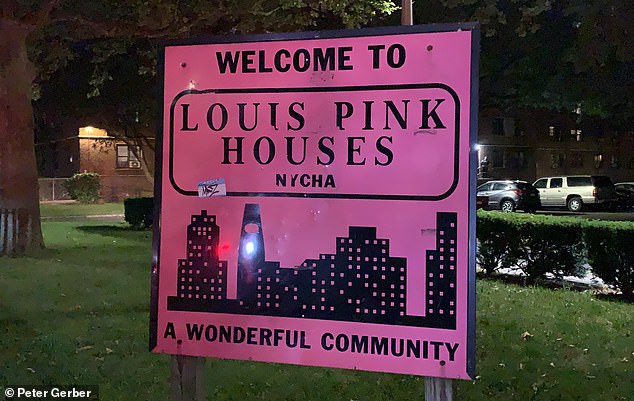 Walls was hit in a barrage of bullets on July 7 at 1259 Loring Ave in the Pink Houses  (above) around 8.30pm after she asked a man in her neighborhood to stop setting off fireworks. She later died from her wounds

Tony Testagros, Shatavia’s younger brother, was also there on July 4.

‘I asked them nicely at first, told them to go behind the building to do it,’ the brother said. ‘But they light off some more.’

He said his sister continued arguing with them and that one of them punched her in the face.

Tony said he and his sister walked away, then returned a little while later. A couple hours after that one of the men returned, pulled out a gun, and fired a single shot that missed.

He claimed that police were called but never came. Tony said he grabbed the shell casing himself, and an ID card that the gunman allegedly dropped.

An NYPD spokesperson disputed that claim, telling DailyMail.com that police were only made aware of the July 4 incident while investigating the July 7 homicide.

On July 7, Walls, whose friends call her Sha, spent the afternoon with her family at the Pink Houses. That night, when she was ready to leave, she called a taxi to take her home, about a 25-minute ride away.

She then phoned Kelvin Hernandez, 30, one of her friends at the Pink House, and asked him to walk her to the taxi. Hernandez said he was smoking a cigarette on a bench outside his building when she called.

‘The cab was outside already waiting for her, and I was going to walk her to the cab when everything happened,’ Hernandez told DailyMail.com. ‘When I got from the bench, I was walking toward her. Then someone shot me.’

‘I didn’t even know I was shot at first, not until I saw I was bleeding,’ Hernandez said. ‘It was like hot blood running down my arms.’

The bullets continued to fly.

‘After he shot me, he kept going toward her,’ he said about the unidentified shooter.

An NYPD spokesperson disputed that claim, telling DailyMail.com that police were only made aware of the July 4 incident while investigating the July 7 homicide 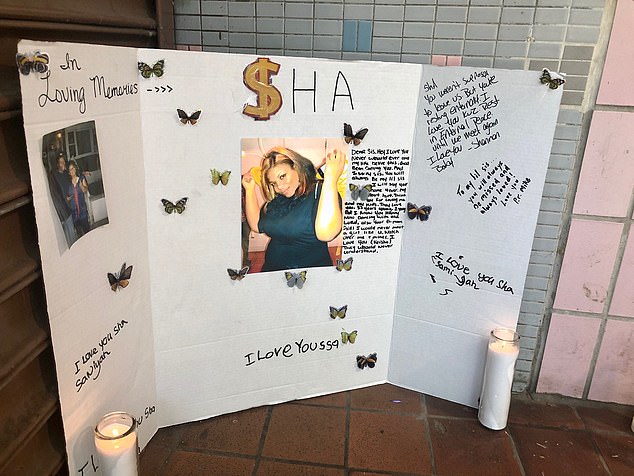 ‘He stood over her, shooting into her chest and body,’ Hernandez, who was also hit by bullets, recalled

Hernandez and others saw Walls trying to hide behind a garbage container in the courtyard, as the gunman, wearing a face mask and hoodie, chased her. He shot her several times as she collapsed to the sidewalk.

‘He stood over her, shooting into her chest and body,’ Hernandez recalled.

He said people were watching the shooting from their apartment windows, which overlook the courtyard. 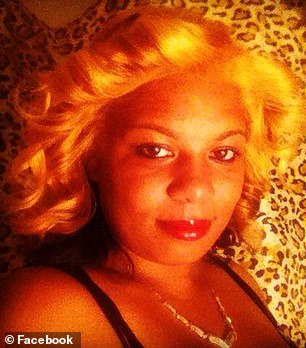 ‘Stop, stop!’ he heard them screaming.

‘I’ve lived in the hood all my life, but I’ve never seen any s**t like this before,’ said one of her girlfriends, who witnessed the shooting and asked to be identified only by her initials, S.L, because she was scared the gunman might come after her.

‘The shooter chased her and caught up to her, and when he let off that first gunshot, I saw the color of his clothes,’ S.L. told DailyMail.com. ‘He went pop, pop, pop till she fell to her knees. As I’m running to her, I’m thinking, ”Is he gonna come up and shoot me too?”’

Walls was struggling to keep her eyes open.

Helen Testagros, Walls’ mother, was home when a neighbor knocked and told her what happened. She rushed to her daughter’s side.

‘She was on the ground talking to me,’ the mother recalled. ‘She was trying to tell me who did it, the same boys. And she was saying, ”I don’t think I’m going to make it, mom.” I was telling her to fight, be strong.’

Hernandez, who was also taken to Brookdale, said he spoke to a detective when he was in the hospital.

‘The next day I called them,’ he said. ‘They said they were going to contact me back, but never did.’

Several residents were critical of the NYPD, claiming officials are not devoting enough manpower to the case. They claim the suspects are gang members from a nearby housing project. The victim’s mother said a man she knows promised to text her a photo of one of the suspects.

Police are not discussing the case with the media, saying only that the investigation is ongoing and no arrests had been made as of Thursday.

People close to Walls were starting to think ahead to the funeral, which will be held in a local church. They describe ‘Sha’ as a beloved young woman who worked hard to support her family and friends. 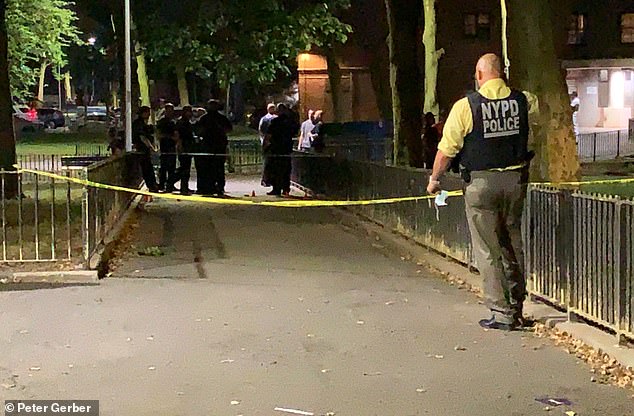 Police are not discussing the case with the media, saying only that the investigation is ongoing and no arrests had been made as of Wednesday

She had a part-time cleaning job at the Port Authority and was also a caretaker to her wheelchair-bound aunt, who lives at the Pink Houses. She was married to a man who’s been incarcerated for the past couple years. While she had no children of her own, she was a loving aunt who’d also watch after other kids in the projects.

‘She’d take care of everybody,’ her friend Erica Lee said. ‘She’d play with the kids when the mothers were not taking care of their kids. She would feed them. She’s the one who organized events, barbecues. She’s the one that kept us all together.’

‘She was a good friend of mine,’ he said. ‘She’d tell me to get a job, stay out of trouble. She was like, ‘Do better.’ She was always giving me confidence in myself.’

He said it’s ‘kind of scary’ to the think about the upcoming funeral. He plans to go with Walls’ brother, Tony, to buy a suit this week. It’s been a decade since he’s worn one.

‘I’m trying to get a nice outfit, with slacks,’ he explained.

‘I’ve been prepping my expression and everything for the funeral,’ he continued. ‘People cry when someone passes away, but I’m not a person to cry like that. I think I will at the funeral.’