Police are investigating if food played a role in the deaths of three Americans at a luxury resort in the Bahamas which had recently ‘fallen into a state of disrepair’ according to reviews.

Michael Phillips, 68, and his wife Robbie Phillips, 65, as well as Vincent Chiarella, 64, were all found dead at a Sandals resort in Exuma last week.

The condition of the incident’s lone survivor, Chiarella’s wife, Donnis – has been upgraded to being in good condition, a spokesperson for a local hospital told Fox News.

Investigators are still looking into a cause of death for the tourists, who were staying in neighboring villas, but have launched probes into the resort’s air conditioning, heaters and use of pesticides.

Now they are turning their focus to the hotel’s cuisine to try and rule out food poisoning as another potential cause, according to Paul Rolle, the commissioner of the Royal Bahamas Police Force.

Police are now looking into the possibility that food played a role in the deaths of three Americans at a luxury resort in the Bahamas, while recent reviews suggest the resort had taken a turn for the worse 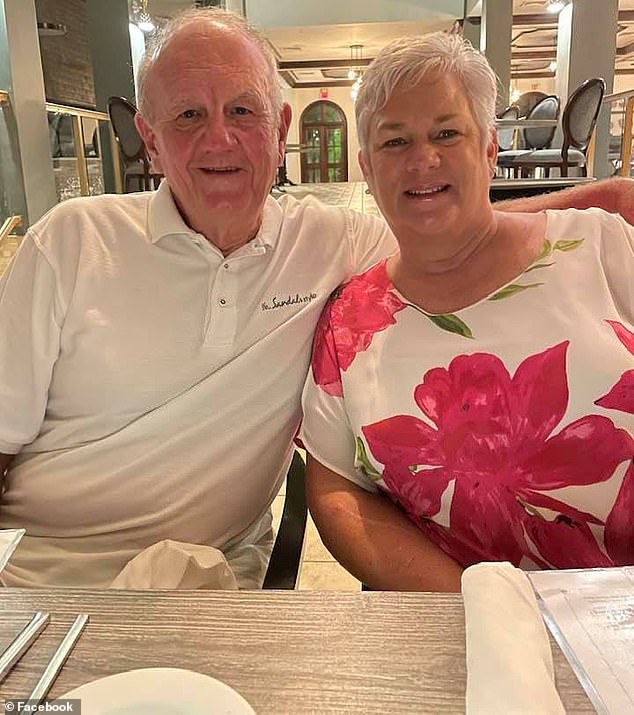 Bahamian officials identified two of the three Americans who were found dead at a resort on Friday as Michael Phillips, 68, left, and his wife, Robbie Phillips, 65, of Tennessee. They are pictured on another vacation in September 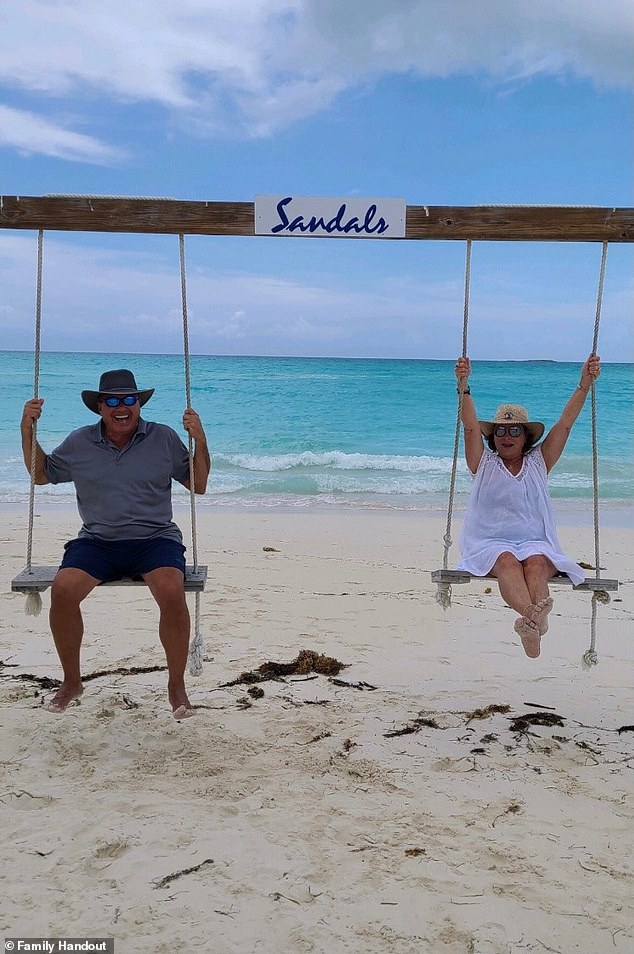 ‘They were all treated at different times and they ate at different places, so… we’re checking all of that, which we will hopefully be able to determine whether or not it was some food or something else that caused it,’ Rolle said.

Samples from all three victims were taken to a lab in Philadelphia and will make up a toxicology report scheduled to come back next week.

Several reviewers on TripAdvisor reported seeing bugs in their rooms and one guest speculated that issues with the air conditioning may have caused Freon poisoning.

All three had reportedly sought medical treatment while staying at the Sandals, the Nassau Guardian reported.

A spokesperson for Sandals would not comment on the possibility of food poisoning and referred DailyMail.com to an earlier statement. 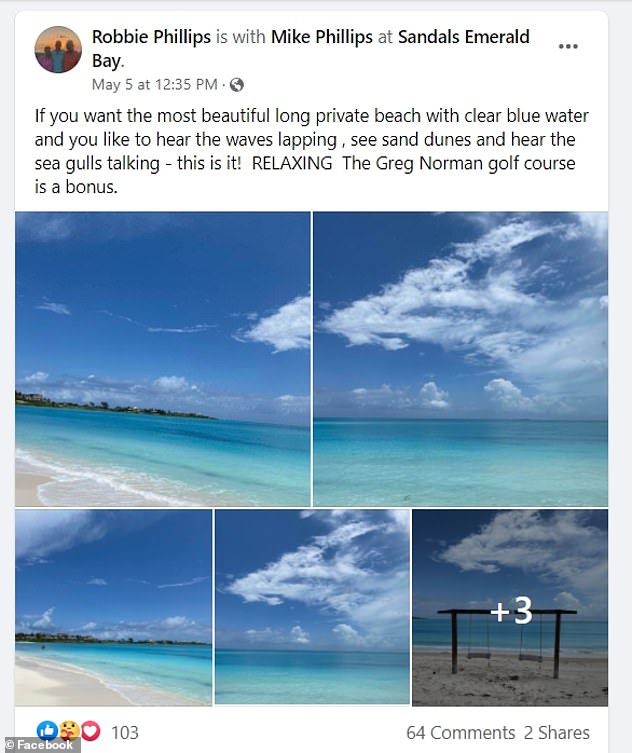 One day before her death, Robbie posted pictures of the beach to her Facebook as she apparently tried to sell others on the idea of the resort 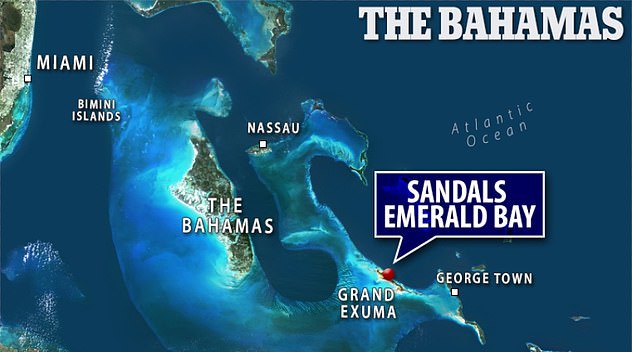 ‘Nothing is more important to Sandals Resorts than the safety of our guests. It is with deep sadness that we can confirm the passing of three guests at Sandals Emerald Bay on May 6, 2022. A health emergency was initially reported and following our protocols we immediately alerted emergency medical professionals and relevant local authorities.’

‘We are actively working to support both the investigation as well as the guests’ families in every way possible during this difficult time. Out of respect for the privacy of our guests, we cannot disclose further information at this time.’

Reviews on TripAdvisor suggest that the resort has gone into a state of disrepair recently.

Michael T. wrote a review May 8, days after the incident and said that he had booked a trip to the resort after enjoying himself last year.

The second trip, however, was markedly different.

‘What we experienced is a resort in a state of disrepair and drastically under staffed,’ Michael wrote. ‘Air conditioning, plumbing, no towels, employees that were new and poorly trained, and staff that seemed to be over worked. Tragically we had to experience the death of three guests and injury of a fourth. It was very difficult to relax to say the least under these circumstances.’

He added that he ‘can not see myself returning anytime soon’ to the resort.

Reviewer Cameron H. referenced the tragedy and noted that ‘the resort did nothing to comfort their guests or even let them know they are safe.’

They also said the resort needed major renovation and called the food ‘horrible.’

Gabrielle K. referenced having problems with the thermostat, poor service and being unable to close a door due to a jam.

Other reviewers reported finding ‘vomit’ in their bathrooms, being served ‘powdered eggs and cruise ship bacon.’ 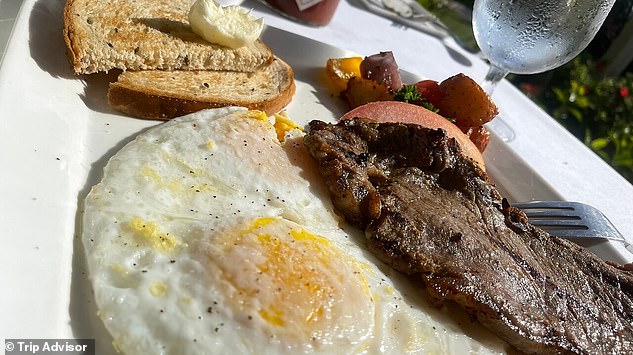 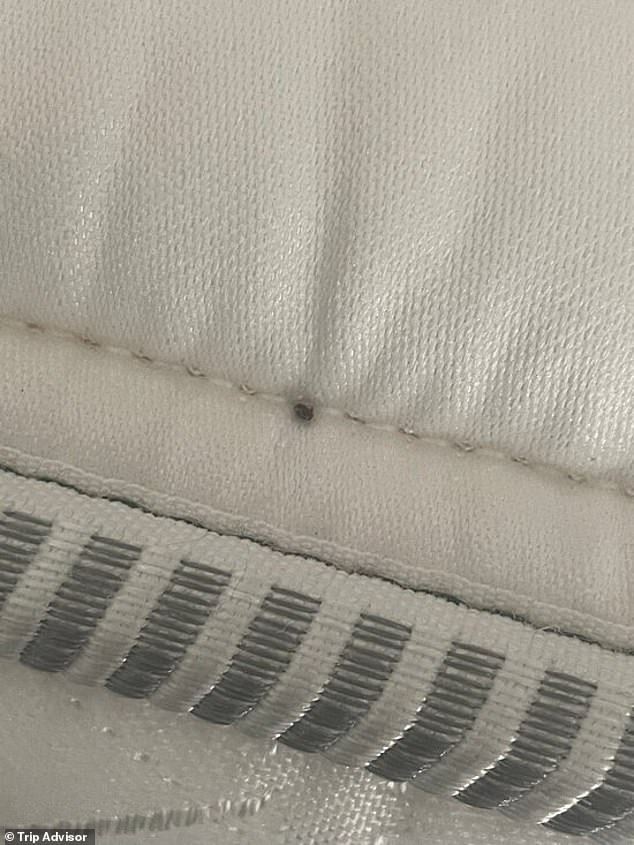 Some even found bugs in their rooms at Sandals Emerald Bay 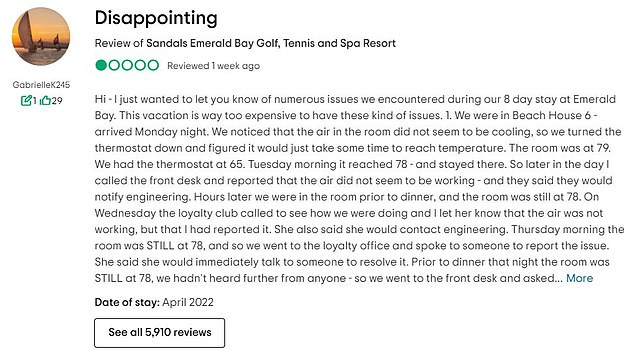 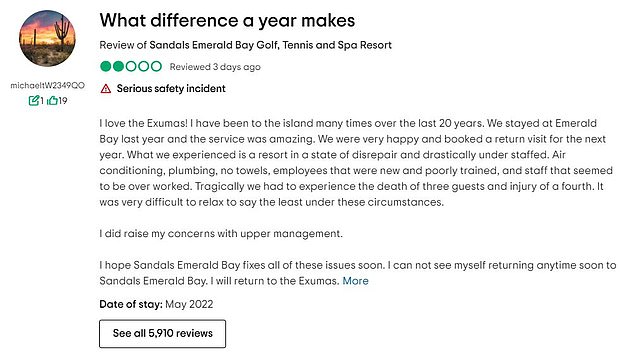 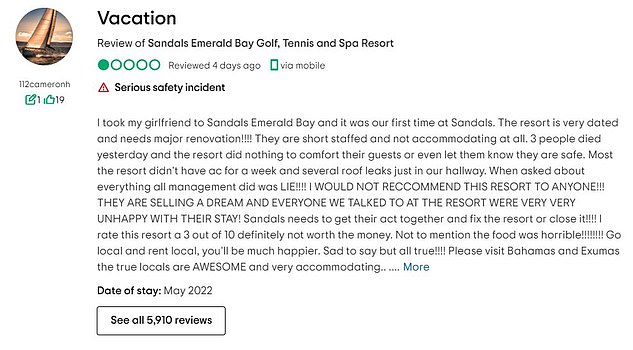 The American victims were found dead Friday morning at the Sandals Emerald Bay resort in Exuma, where the couples had been staying in two separate villas.

They were all said to have suffered from convulsions before their deaths, and when Donnis Chiarella, from Panama, Florida, woke up on Friday morning, she found herself paralyzed and her late husband not moving,  the couple’s devastated son Austin Chiarella previously told ABC News.

What is Freon? The toxic chemical found in air conditioners

Air conditioners commonly use a chemical called Freon, which can prove toxic if inhaled, as a refrigerant.

The chemical is a stable, nonflammable, moderately toxic gas that is tasteless and mostly odorless.

Lung failure or death may occur with prolonged exposure to Freon.

Accidental poisoning from Freon, while rare, usually occurs in persons who work directly with cooling chemicals.

Symptoms of mild to moderate Freon poisoning include:

-irritation of eyes, ears, and throat

-bleeding or fluid buildup in the lungs

The stricken son said his mom had first fallen ill on Thursday, and visited a local clinic. She was discharged shortly afterwards, and believed her health had improved.

An initial investigation also found that the Phillips had ‘complained of illness the previous evening,’ cops previously announced, adding that the pair ‘attended the local Medical facility’ where they received treatment, and then returned to their lodging.

‘We stand ready to provide all appropriate consular assistance,’ the department said in a statement. ‘Out of respect for the privacy of the families, we have nothing further to add at this time.’

Another American vacationer has previously blamed a faulty air conditioner for their deaths, though that has not yet been confirmed.

In a Facebook post, Chris Coucheron-Aamot wrote that: ‘Three of our neighbors in the building right next to us died and a fourth was airlifted in critical condition early yesterday.

The post, which seemed to be penned by Coucheron-Aamot’s partner, describes a crime scene at the resort’s luxury beachside villas where the bodies of the guests were discovered by hotel personnel.

He added: ‘There was crime scene tape and security guards all around our unit,’ the post from Coucheron-Aamot, who was staying in the same villas as the stricken guests, reads.

In the post, Coucheron-Aamot – who said he was continuing his vacation at the resort despite the deaths – suggested that there may have been issues with some of the villas’ air-condition systems that may have led to the deaths.

‘It sounds like it may have been a fault with the a/c in the unit, causing a toxic coolant leak,’ the post reads.

‘It was hard to sleep last night – every time the a/c came on, I woke up.

‘We’re continuing our vacation because that’s what I would want people to do if I were to have been one who died – celebrate my life by living yours to the fullest. That said, our hearts are with those who grieve. May God have mercy on them and us.’

Sandals said staff were alerted to a medical emergency and the victims’ families are being supported, she told the Mirror.

They would not comment further on the deaths on Monday, saying instead: ‘Out of respect for the privacy of our guests, we cannot disclose further information at this time.’