Was speeding Tesla driving in autopilot  when it ran a red light and killed a pedestrian? Cops investigate whether electric car was in ‘autonomous mode’ when it fatally struck a husband and injured his wife as they crossed a San Francisco street

A speeding Tesla killed a Clovis man and seriously injured his wife while they were crossing a San Francisco street Sunday afternoon.

Officials are investigating whether the Tesla was operating on self-driving mode, police said in a statement.

Benjamin Dean, 39, was fatally struck in the crash at around 2:08 p.m. in the Tenderloin district.

His wife Kelly was taken to San Francisco General Hospital with serious injuries.

Benjamin Dean, 39, was killed in the crash on Sunday in San Francisco. His wife Kelly was critically injured. They were visiting the city to celebrate their third wedding anniversary 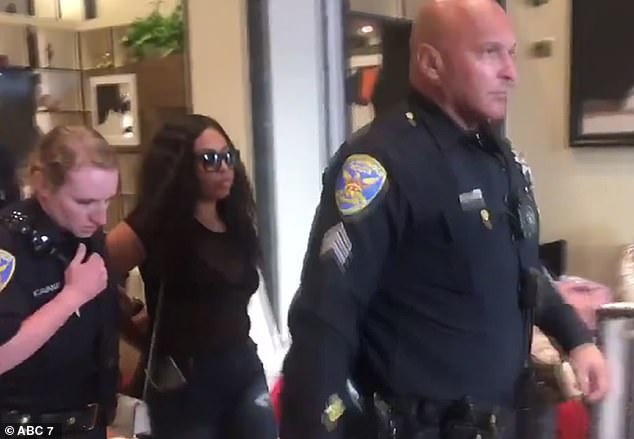 Kelsey Mariah Cambridge (pictured), 21, of Vallejo has been charged with one count of vehicular manslaughter and one count of running a red light 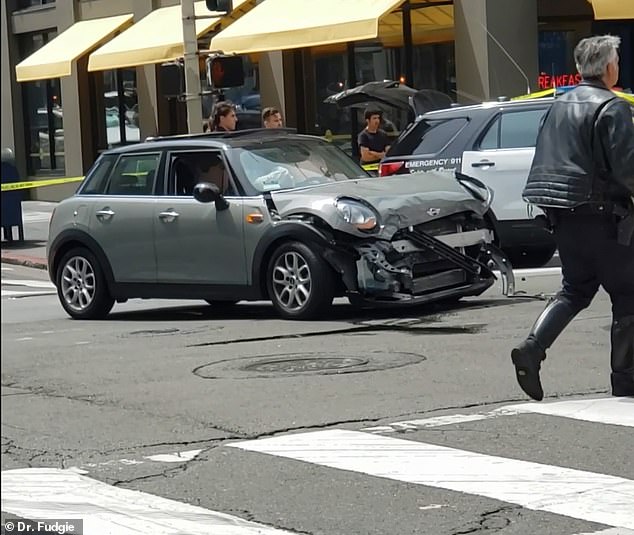 Police said the speeding Tesla ran a red light and was broadsided by a Mini Cooper (pictured). Both cars lost control and the Tesla hit the couple crossing the road

The driver of the Tesla, 21-year-old Kelsey Mariah Cambridge of Vallejo, has been charged with one count of vehicular manslaughter and one count of running a red light, police said.

Police said the Tesla ran a red light at Taylor Street and O’Farrell, and rammed a gray Mini Cooper in the intersection, causing both cars to lose control.

The Tesla then plowed into the husband and wife as they crossed the road.

The vehicle was driving at least 45 mph, 15 to 20 mph above the posted speed limit, as it was heading northbound on Taylor Street.

The Tesla then smashed into an unattended, parked vehicle and came to a halt on the sidewalk, cops said.

‘We do not know if it was in autonomous mode or what type of mode or if she [Cambridge] was in control of the vehicle,’ Sgt. Frank Harrell from the San Francisco Police Department Traffic Division told ABC News.

The car was rented through the peer-to-peer car rental service Get Around.

Get Around spokeswoman Joan Wickham said the company is cooperating with authorities and couldn’t comment further ‘out of respect for the families involved and the investigation underway.’ 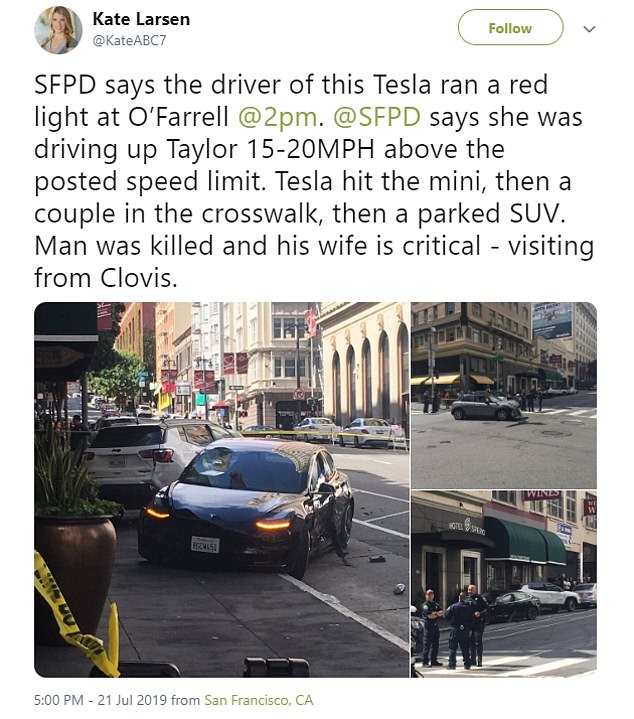 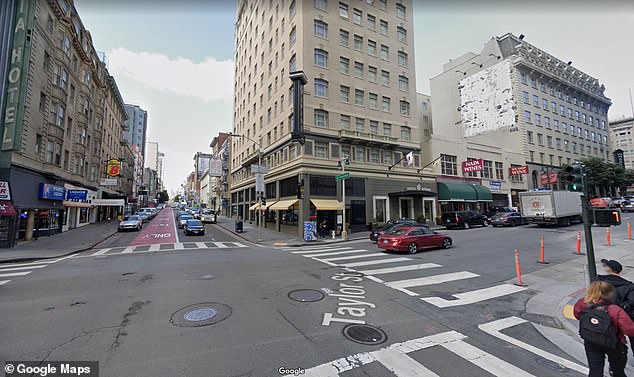 The deadly collision happened at 2:08 p.m. Sunday at Taylor Street and O’Farrell (pictured) in the Tenderloin district

IBTimes reported that if the car was in self-driving mode, this accident would be the third involving a Tesla killing a pedestrian, according to government records.

The Tesla driver was not hurt and was interviewed near the scene by police.

Police say Cambridge was cooperating with them and that drugs and alcohol do not appear to be a factor.

The driver of the Mini Cooper was also not injured.

The couple, from Clovis in California’s Central Valley, was visiting San Francisco to celebrate their third wedding anniversary.

They both work for the Fresno County Department of Social Services, according to their Facebook pages.

Get Around says on its website that all its rentals are insured through its primary insurance policy.