A ‘sick’ and ‘psychotic’ minority of Alfie Evans’ supporters threatened to ‘burn down’ Alder Hey and wished harm on doctors as it was revealed police are ready to arrest the trolls.

Alfie’s parents Tom Evans and Kate James have repeatedly urged people not to threaten anyone over the tragic plight of their son because it was damaging their campaign.

The abuse has also outraged the majority of their peaceful supporters who have gathered in their hundreds outside the hospital most days.

Police in Liverpool are still guarding Alder Hey and have said they are monitoring social media posts relating to Alfie Evans in a bid to stop ‘malicious’ messages and will arrest people responsible.

In recent days some internet trolls have even named the doctors responsible for his care – despite a court order making it illegal to do so – and staff had received phone calls from people accusing them of being ‘murderers’ and ‘killers’. 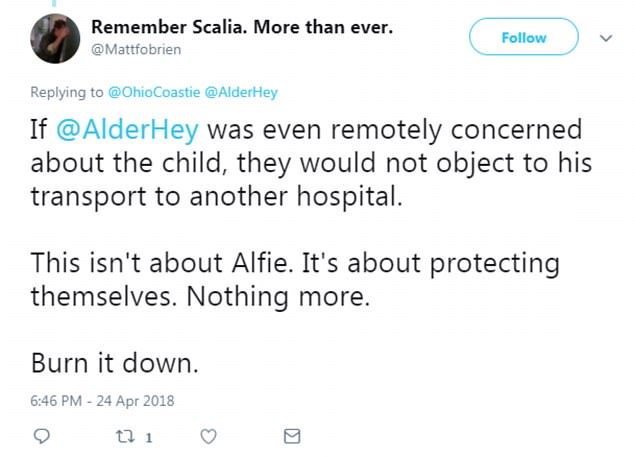 The hospital said last night many of their staff had been on the receiving end of ‘highly abusive and threatening language and behaviour’ in person, via phone calls, emails and on Facebook and Twitter.

Alder Hey’s doctors ‘hate us and look down on us because we’re not like them’, says father

Alder Hey’s doctors ‘hate’ and look down on Alfie’s parents and family, his father said today.

Tom Evans says medics avoid them in corridors and give them ‘horrible smug looks’.

When asked why, he responded: Because I’ve fought against them for so long and I’m right.

‘We’ve tried to work with them but they’ve acted aggressively towards us. They’ve fought so hard towards us.

‘We walk around the corridors and they pop into other cubicles to avoid us. T

‘They give us some horrible smug look as if we’re in the wrong. It’s like we’re criminals and we’re being looked down on’.

He added: I feel like I’m in a maximum security [prison] and they’re looking down on us.  If this was a general case they would have let home go home by now’.

Over the weekend a small crowd tried to storm Alder Hey Children’s Hosptal leaving staff and parents of other patients frightened about their safety.

One relative of a terminally ill toddler called the atmosphere ‘intimidating and scary’ and said she had even heard chants of ‘burn it down’.

This threat has also been repeated online, which has caused outrage.

One critic tweeted: ‘People should never ever encourage others to burn down a hospital. That is an absolutely disgraceful and psychotic thing to say.

Another said: ‘Wondering how strongly the zero tolerance policy will be invoked for those staff told that their children will be murdered, for those people who said “burn it down”, for those who threatened nurses, doctors and other families. Just disgusting!’,

A further critic said: ‘If you’re stood outside Alder Hey shouting “burn it down” because you don’t agree with every doctors medical opinion on that poor kid then I’m ashamed for you. That is an incredible hospital that saves thousands of kids lives every year’.

Police in Liverpool have said they are monitoring social media posts relating to Alfie Evans in a bid to stop ‘malicious’ messages.

They warned that any threatening posts could prompt police action as tensions remain high outside the hospital and amid the ongoing legal battle.

Chief Inspector Chris Gibson said: ‘Merseyside Police has been made aware of a number of social media posts which have been made with reference to Alder Hey Hospital and the ongoing situation involving Alfie Evans.

‘I would like to make people aware that these posts are being monitored and remind social media users that any offences including malicious communications and threatening behaviour will be investigated and where necessary will be acted upon.’ 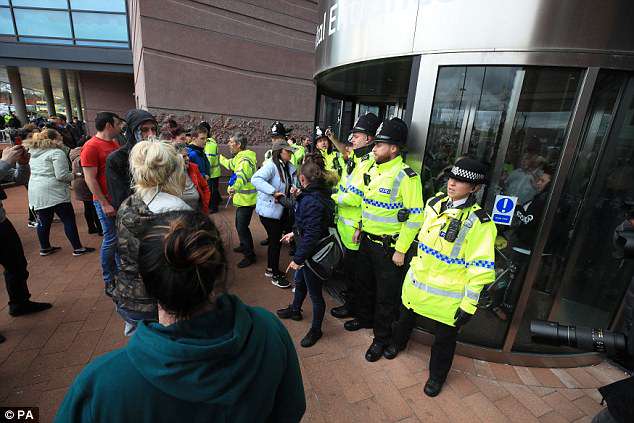 Alder Hey Hospital last night revealed how staff and patients have been subjected to a barrage of abuse over Alfie Evans.

In a powerful open letter, health chiefs said the world-renowned hospital in Liverpool had found itself at the centre of a ‘social media storm’.

Police officers have been stationed at the hospital for several days and on Monday intervened to stop a mob of ‘Alfie’s army’ supporters storming the entrance.

Chairman Sir David Henshaw and chief executive Louise Shepherd said every- one at the hospital had been ‘deeply affected’ by Alfie’s plight and that it was wrong that the professionalism, motivation and ethics of those caring for the toddler had been questioned.