Police join search for boy, 12, who ‘ran off from school’

A police search is underway for a boy ‘who ran off from school’ after his stepmother’s urgent plea for help was shared more than 2,300 times.

Hampshire Constabulary said it has made a ‘number of enquiries’ for the 12-year-old boy.

Shane Stacey, from Farnborough, Hampshire, was reported missing on social media at around midday on Monday January 29.

Another post which contains a picture of Shane has now been shared more than 2,300 times.

Shane is 4ft 4in tall and may be wearing his Fernhill School Uniform, Nike trainers and a navy blue puffer jacket. 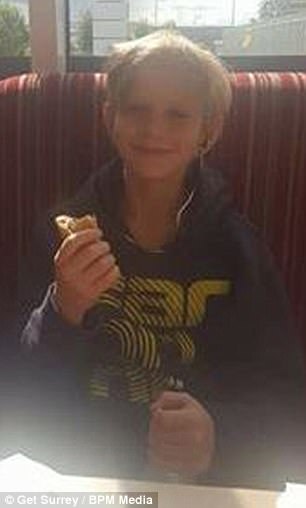 Shane Stacey, from Farnborough, Hampshire, was reported missing on social media at around midday on Monday January 29

Shane’s stepmother Nicky Stacey made another urgent appeal via Facebook on Tuesday.

She said: ‘This is my stepson Shane Stacey who has been missing since he ran off from school yesterday at around 12.

‘If anyone has seen him or your children know his whereabouts please let me know.’

Hampshire Constabulary confirmed it was involved in the ongoing search.

A Hampshire Constabulary spokesman said: ‘This has been reported to us and officers are conducting a number of enquiries to locate him.’