Police in Denver opened fire on an SUV killing the driver and injuring his passenger after a high-speed chase because they wrongly thought an escaped convict was inside.

Officers assigned to monitor an address in Denver associated with attempted murder suspect Mauricio Venzor-Gonzalez saw the car circling the area on Monday evening, and thought he was the passenger.

When police tried to stop driver Steven Nguyen, 23, he fled and led them on a high-speed chase before being forced to a halt. 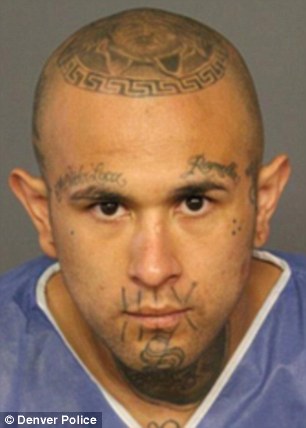 Nguyen and his passenger, Rafael Landeros, also 23, refused to raise their hands and started ‘moving around, looking for something’, according to officers, who concluded they were looking for a gun and opened fire.

Nguyen died and Landeros was taken to hospital where he recovered from a bullet wound while being held on warrants from another county.

Venzor-Gonzalez fled the Denver Health Medical Center in Colorado on Monday morning while reportedly wearing leg irons, although police have refused to confirm or deny this.

Sheriff Patrick Firman said Venzor-Gonzalez had an appointment for a medical issue and hospital transportation is typically handled by two deputies. 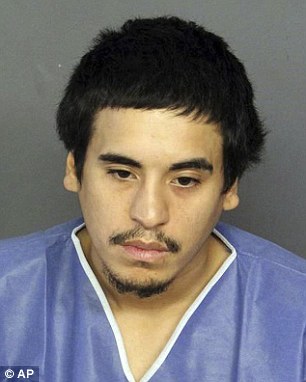 Authorities still have not found the 23-year-old, who is charged with the attempted murder of a police officer in November.

He was arrested after a shootout with police during a traffic stop, after which the driver fled but crashed.

The passenger, later identified as Venzor-Gonzalez, ran and fired a gun at the officer several times before escaping.

Referring to Monday’s shooting, Denver Police Commander Barb Carver said officers knew about the charges Venzor-Gonzalez faced for the November shooting and believed the occupants in the car were looking for a weapon, she said.

When the driver again tried to flee, driving down an embankment, officers followed, Carver said.

‘Officers continued to see the occupants moving around inside, still looking for something, and so again they fired at the vehicle,’ she added.

Denver reached a settlement of nearly $1 million last April with the parents of a 17-year-old girl who was shot and killed by police while driving a stolen car toward an officer in 2015. 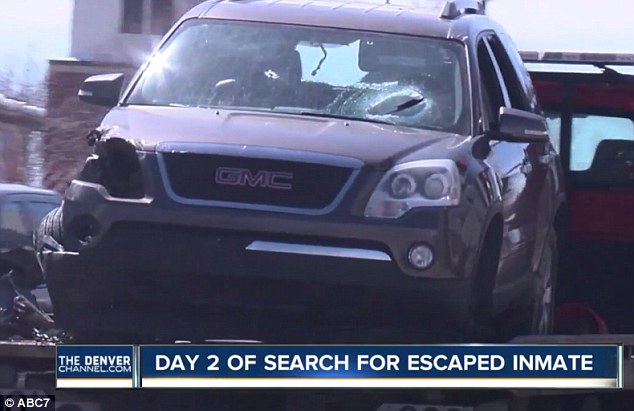 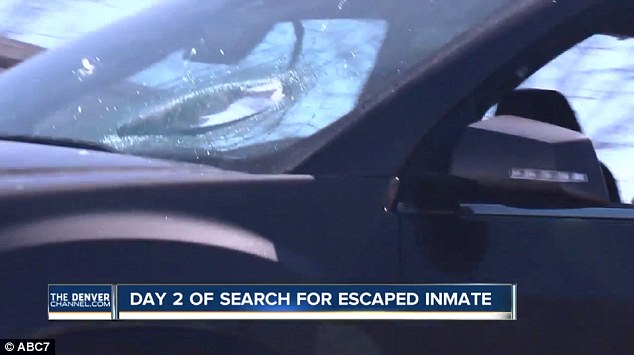 Nguyen and his passenger, Landeros, also 23, refused to raise their hands and started ‘moving around, looking for something’, according to officers, who concluded they were looking for a gun and opened fire. Pictured: The damaged SUV on Tuesday

After a string of cases where officers fired at a moving car, the department changed its policy after the teen’s death to advise that officers only fire at moving cars if someone inside is shooting at them.

In this case, the car wasn’t moving either time officers fired, Carver confirmed.

She said the pursuing officers never lost sight of the vehicle, so police don’t believe Venzor-Gonzalez was ever in the car. 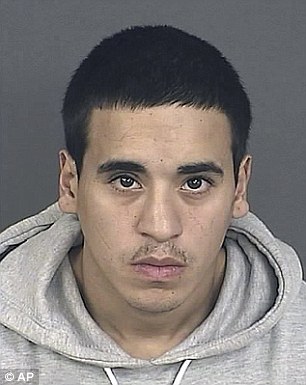 Police found a loaded handgun and determined that the car was stolen.

Officers were wearing body cameras at the time of the shooting, she said, but the video has not been released.

‘The officers were acting on information provided to them that Venzor-Gonzalez was in the passenger seat,’ she said.

‘They believed that to be him,’ adding his criminal history ‘justifies their actions.’

The department is working with the FBI and other agencies to locate the suspect.

‘He’s a very dangerous individual,’ she said. ‘This is our top priority. The community’s not safe with him out there.’

The three officers involved in Monday’s shooting have been taken off patrol duty.

The shooting will be investigated by the Aurora Police Department, the Denver District Attorney’s Office and Denver’s Independent Monitor, a civilian-led agency that oversees the police and sheriff departments. 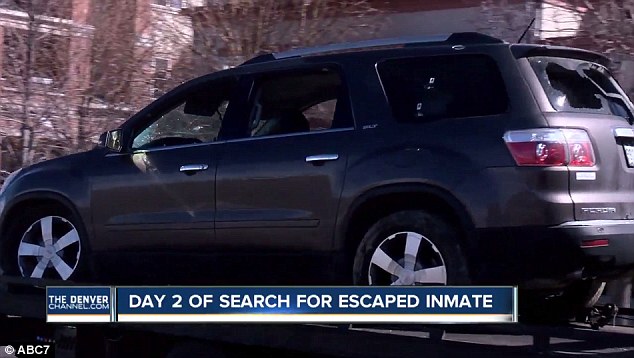 The three officers involved in Monday’s shooting have been taken off patrol duty. Pictured: The damaged SUV on Tuesday