Former naval officer Stan Carby was just 65 when he was sent to the hospital for rehabilitation following a series of mini-strokes.

A large man, his weight ruled out being looked after at home and he was admitted to Daedalus ward at lunchtime on 26 April 1999.

His daughter Debbie Mackay, 54, a secretary from Gosport, said: ‘Generally his health was okay and he wasn’t in any pain and he was on nothing stronger than aspirin.

‘He was there for rehab so we hoped they’d be able to get him back on his feet but the following day they told us he had taken a turn for the worse.’

She said the family was devastated when they found him lying clammy and unresponsive on the ward.

They lifted him up to help him breathe and found a tube in his back – later identified as a morphine syringe driver.

The doctors told the family they were letting ‘nature take its course’ and he died 24 hours after he was admitted for rehab.

Mrs Mackay said: ‘It can’t be right for a man who was admitted to a hospital for rehab to die the following day. We knew something wasn’t right from the start. It has been a constant battle to have our concerns taken seriously.’ 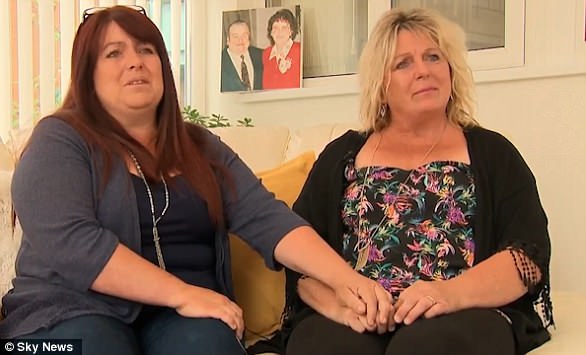 His widow, Rita Carby, fought tirelessly along with her daughter Cindy Grant, 44, and Debbie Mckay, 54, for justice but sadly she died in 2007 and will never see the results of the inquiry.

His daughter Cindy Grant, 44 , a cook, said: ‘It’s really upsetting my mum hasn’t been here to see this day but we are convinced the people who were responsible for this will be held to account.

‘I heard she was abroad but I didn’t expect she would have been here to face the music. We had a feeling she would be out of the country. Let’s hope she gets to hear what has happened today.

She said: ‘We are hoping criminal charges should be brought against not just those in charge but those who administered the drugs as well.’

Debbie McKay said: ‘It has been a long, long road to get to this point and it was a mixture of relief and emotion to hear what the Bishop said.’ 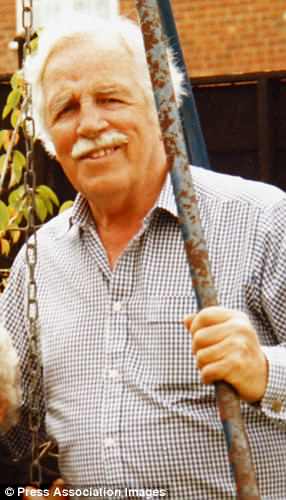 Arthur ‘Brian’ Cunningham only went in to hospital over his bedsores

A combination of medical problems meant he could be cantankerous.

On his first night Mr Cunningham, who was also known as Arthur, became agitated so staff at the hospital gave him diamorphine to help quieten him down.

The next day his step-son, Charles Farthing, was told by nurses the drugs had been prescribed so he would remain calm.

However diamorphine was then increased four-fold over the following days and he died five days after being admitted,

Mr Farthing said that when he heard his step-father had been admitted her travelled to Gosport to visit him.

He said: ‘At that point a man, maybe a porter or cleaner, said to me: ‘That’s the death ward,’ which seemed stupid because Brian was nowhere near death, but I didn’t think too much of it.’

He said his step-father was attached to a syringe driver for regular morphine and midazolam – a strong sedative – and was unconscious.

He said: ‘He out of this world and I thought straight away they must be killing him, because my mum had been given a syringe driver just before she died of cancer in 1989.’

He said he demanded the driver be removed by Dr Barton refused and he died just five days after being admitted.

Mr Farthing said: ‘I’d like to see some action. Barton was utterly reckless in her prescribing, utterly reckless. She gave the nurses free licence to deal with these patients as they wished.’

His wife Anne said: ‘These people did not deserve to be put down like a dog, because that is what happened. These people lived their lives only for someone at the end to decide to play God and put an end to them.’ Elsie Devine, 88, been admitted to the small community hospital when her daughter Ann, with whom Elsie lived, had to go to London.

She initially kept busy and wrote to family and friends but died a month later after suffering what her family say was a kidney infection.

Relatives say she was  ‘given enough drugs to lay out a six-foot violent man’.

In a formal complaint to doctors’ watchdog the General Medical Council, her daughter Ann said: ‘On November 18 1999, my mother was administered with a 25mcg fentanyl patch that was only licensed that year to be used for ‘chronic intractable pain due to cancer’.’

Fentanyl is a powerful painkiller which is up to 100 times more potent than morphine.

The following morning, the complaint continues, ‘she was then injected with 50mg of chlorpromazine [a sedative used to treat paranoia and agitation], double the dose for a normal adult and far higher than what should be used on the frail elderly.

‘Fifty-five minutes later, our mum was started on a syringe driver with 40mg of midazolam, another strong sedative, pumping directly into her body. A further 40mg of diamorphine [a painkiller] was added, which is four times the recommended dose.’ 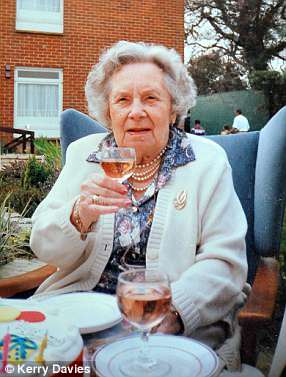 Gladys Richards died in hospital in 1998

Gladys Richards was admitted to Gosport War Memorial Hospital in August 1998 for rehabilitation after a hip operation.

But her family became extremely concerned that very strong painkiller and sedative doses were being given to their mother even though she wasn’t in pain.

Mrs Richards died in the hospital days later, aged 91. Daughter Gillian Mackenzie then became one of the first to raise concerns about the ‘care’ patients were receiving at the hospital.

Mrs Mackenzie, now 85, said: ‘She wasn’t in any pain at all but they tried to give her diamorphine while we were there.

‘I think they wanted to keep her heavily sedated so they didn’t have to look after her. It was less work for the nurses.’

She said she was told by nurse manager Philip Beed: ‘I am going to make her life easier by giving her a shot of diamorphine.’ But she added: ‘I said ‘No you will not. You are not going to give my mother diamorphine’.’

However Mrs Richards was later sedated and given pain killers on a continuous basis and died five days later.

Jean Stevens had entered Gosport War Memorial Hospital for rehab after a stroke at the age of 73.

She was ‘bright as a button’ when she entered the now notorious Daedalus Ward in 1999. Yet she was quickly put on a cocktail of painkillers and sedatives and within two days was dead.

Her husband Ernest has been waiting for the truth about her death for nearly twenty years.

The Second World War veteran, now 92, said: ‘We had been planning a party for when she came home.

‘But the next day I went in and she was just laid out. I asked a nurse what the matter with her was and she just said: ‘I can’t really tell you’.

‘They had put her on a [drugs] pump straight away and she only opened her eyes once after that, just before she died. I truly believe my wife had quite a lot of time to go before she was put on those drugs.’ 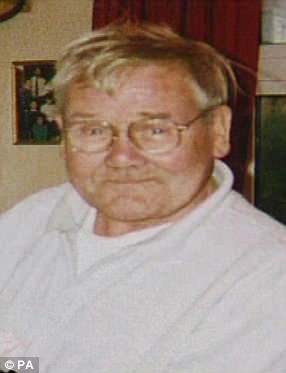 Robert Wilson begged his son to help him

Robert Wilson, 74, went into hospital for rehabilitation after a fractured shoulder. But he soon became concerned over the amount of drugs he was being given.

He begged his son Iain for help a day after being admitted with a broken arm, saying doctors were killing him.

His son said he nearly got ejected from the hospital when he questioned his father’s treatment, but now wishes he had done more to get him out.