Police officers the shocking level of violence they have come to

Sharing their stories in Police Code Zero: Officer Under Attack, airing on Channel 5 tonight at 10pm, officers revealed how they have been beaten and punched and had their dogs bitten and choked by violent criminals.

In one shocking scene, a suspect is seen biting and choking a German Shepherd after being chased by PC Gareth Greaves in Manchester, following an altercation at a petrol station.

And PC Lucie Gray of Newbury, who had her head repeatedly smashed against a police car while tackling a drunk driver, was left bleeding in pitch darkness on a deserted hill while waiting for backup.

‘To a degree, I think as officers we accept that we will be assaulted,’ she explained. ‘It’s not right and it’s not OK, but ultimately I know they’re not assaulting me personally… it’s the uniform that I’m wearing and the job that I’m doing.’

PC Lucie Gray was assaulted by a suspect while investigating a drink driving call. The man, called Mark, bashed her head against her police car several times 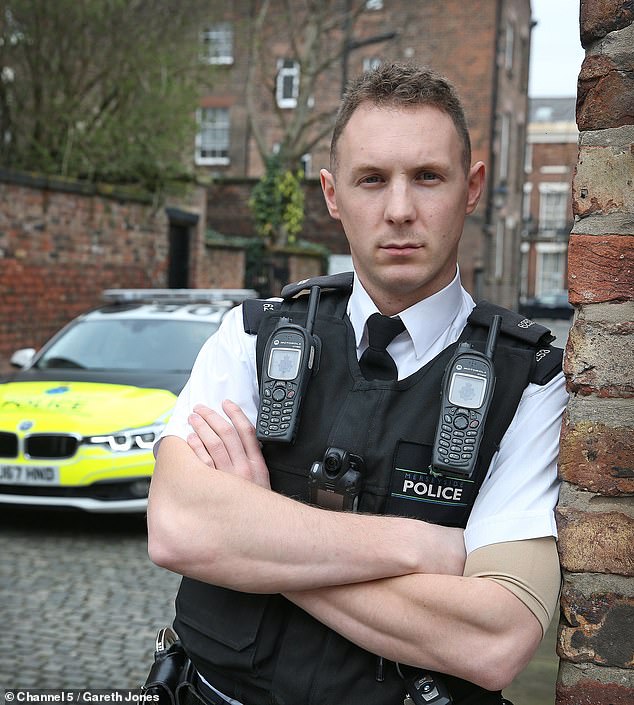 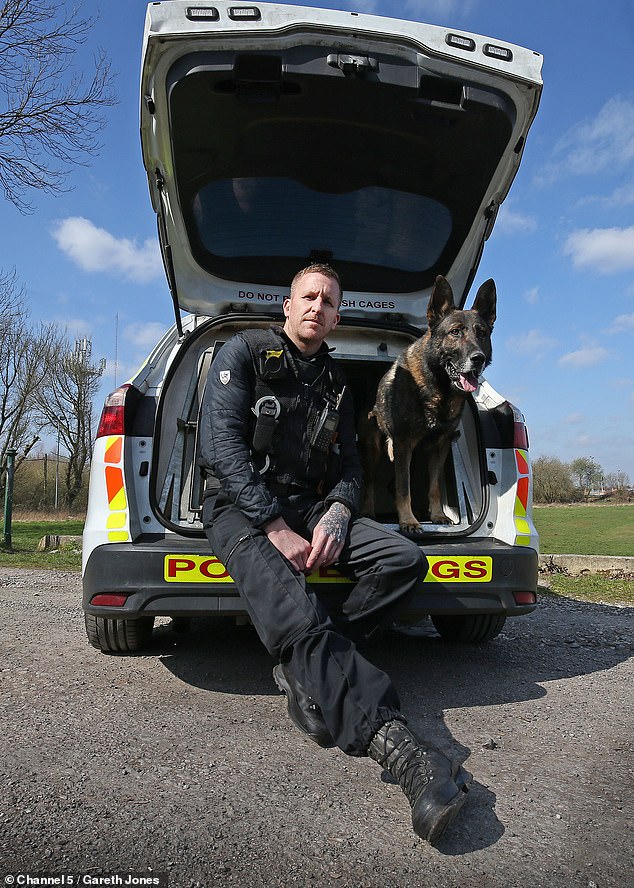 PC Gareth Graves, with his dog Theo (pictured) were both assaulted by a suspect that had tried to flea from arrest

A code zero, is the radio call sign issued by officers who need urgent assistance, often when they are under attack and their lives are in danger.

In the documentary, PC Lucie Gray and her partner Sgt John O’Donovan were seen using the code, after an altercation with a particularly violent and unstable suspect left them seriously wounded.

The incident took place during one of the duo’s late shift in 2015, which started at 5pm and ended at 4am.

O’Donovan, who used to be a Met officer before he moved to Newbury said that policing is actually harder outside of London because there’s less back-up available.

They received a report that a member of the public had called about a ‘man up in a secluded place possibly having crashed a van and possibly being drunk.’ 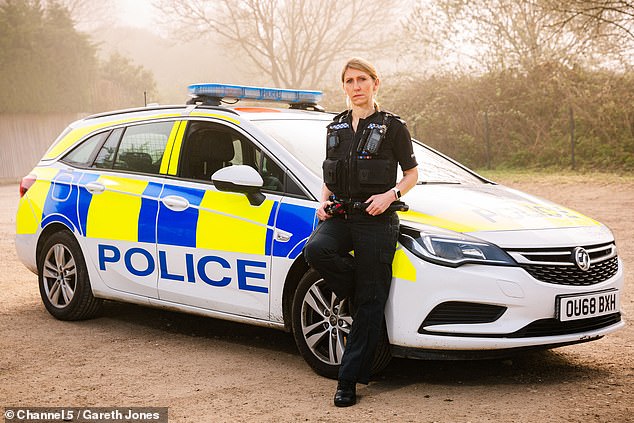 Lucie Gray (above) tried to stop the suspect from hitting her partner John, but it turned the focus – and the blozs – on her

The suspect was also accompanied by a young child identified as his daughter.

The police partners drove up to Combe Gibbet, nine miles from Newbury, a remote area surrounded by fields and found a man called Mark, holding a can of beer

‘Just in the distance we saw an outline of two people walking towards us. It was a male and a small female child,’ Lucie recalled.

‘I was uncomfortable about the situation, something not right about it made me a little uneasy.’

During the incident, recorded by Lucie’s body camera, Mark refused to answer John and Lucie’s questions and asked them if they were acting ‘in accordance with the law of the land’.

He suddenly walked off, and the officers followed as he was suspected of drink driving accompanied by a minor, causing them serious concerns about her welfare.

But when John tried to arrest Mark on suspicion of drink driving things turned violent, as he resisted and started hitting Johnny.

‘Within a split second, he had started punching Johnny to the face, with both of his hands like a complete wild animal,’ Lucie said. 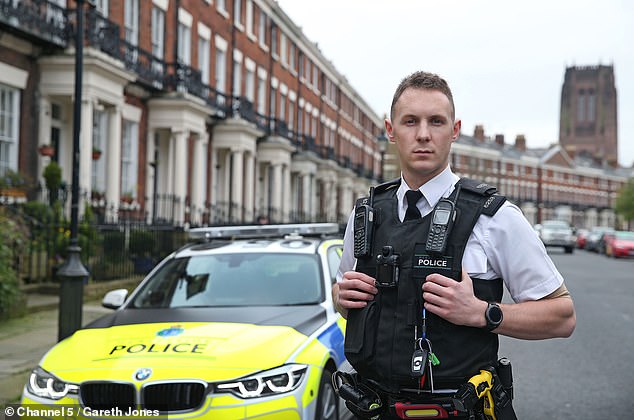 ‘He went from zero to crazy man in literally a split second.’

On the recording the man could be heard threatening John as he hit him, while Lucie tries to calm him down.

Lucie tried to jump on the man’s back and grab a hold of his arm to stop his attack, however, it only turned his attention to her instead.

‘I just remember feeling being punched to the side of the face several times, and I think I sort of went down of the floor,’ the officer said.

Mark then lifted her up and smashed her hand against the police car several times in a row. 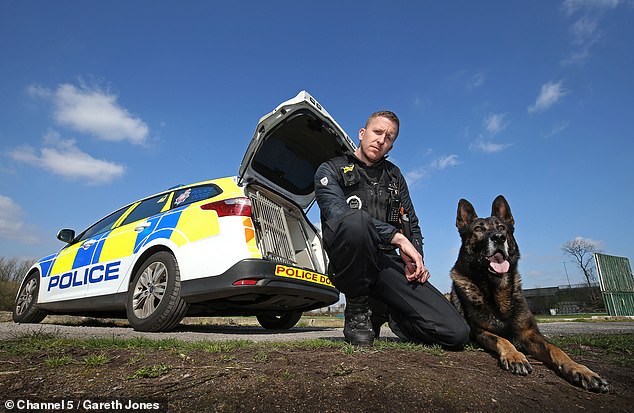 PC Gareth Greaves said he owed more to Theo that he could give him and that the brave dog never backed down during the altercation, even after he was viciously bit by the suspect

After receiving the blows to her head, Lucie managed to call zero zero – the code for back-up.

‘I just knew at that point it had gone past us being able to deal with it ourselves,’ she said.

When back-up finally reached them, Mark had fled with the child and Lucie burst into tears.

In 2017, a police officers and his dog were attacked by a suspect running away from arrest after an incident at a petrol station in Manchester, recorded on PC Gareth Greaves’ body camera.

The incident, Gareth happened at 4:30am, at the end of a night shift when PC Greaves and his German Shepherd Theo were on the trail of a suspect in Hyde, seven miles away from Manchester’s city centre.

The officer was called to argument between two men and a cashier at a petrol station, and followed their car as they drove away.

After a brief chase, the suspects pulled up in a car park and tried to take off, prompting Gareth to release Theo to puruse them.

The dog managed to catch up with the suspects, and clamped his jaws around one of their legs as he ran.

The suspect they changed strategy and started hitting PC Greaves, who quickly called for back-up.

But faced with tackling the suspects alone until support arrived, he was punched repeatedly and was left bleeding. 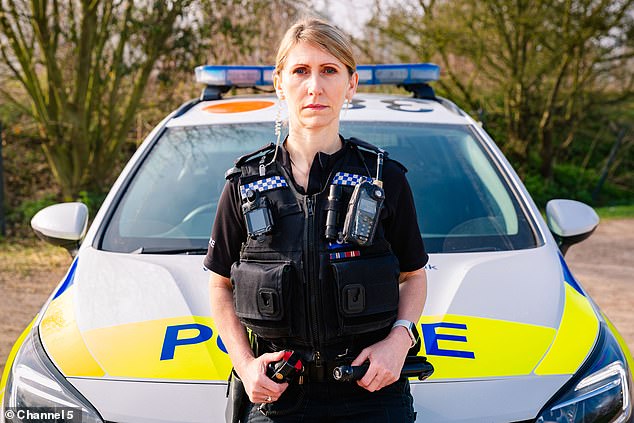 The other man from the car then got involved, and while he didn’t join the fight, he encouraged his friend to ‘bite the dog’s ear’.

After following his friend’s advice, the suspect then tried to choke Theo in order to get away – but the dog refused to back down until support arrived.

Gareth says the suspect’s whole demeanor changed when his friend joined, and that he tried to choke the dog in order to get away.

In 2018, PC Kyle Sayers was assaulted by a violent motorist during a traffic stop in Merseyside.

The man launched his attack after Kyle pulled him over in the street. The officer and the suspect ended up on the floor, while the man viciously hit Kyle repeatedly in the face.