A police officer who was named Special Constable of the Year has been jailed for more than two years for harassing and threatening to rape two ex-girlfriends.

Daniel Glassey bombarded the women with sickening abuse as part of a two-year campaign of controlling behaviour, making their lives a ‘living hell’, a court heard.

He threatened to throw acid into the face of one partner and ‘kick her teeth’ in. The 30-year-old also pulled her hair and spat at her during a horrendous relationship that left her feeling ‘trapped’ and ‘living in fear’.

Chester Crown Court heard how his campaign of control began when he ‘refused to accept’ that a partner had left him in June 2018. 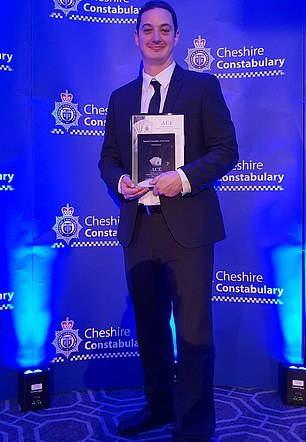 Glassey (pictured, left, after his arrest and, right, accepting his award) unleashed rape and acid attack threats as part of a sickening campaign against two women, including a fellow officer

He barraged her with texts and phone calls for months demanding to know where she was and who she was with.

The court heard how he even demanded that she sent pictures to prove what she was doing.

However, Glassey – who was named as Cheshire Police’s Special Constable of the Year in 2018 – had actually started a new relationship with a fellow officer in March of that year.

Glassey’s new partner was not aware that he was in a relationship with someone else. The new relationship ‘was initially good’, but began to go downhill in August 2018.

The court heard how the controlling copper persistently called, messaged and emailed her and changed his shifts to ensure that they were always working together.

He constantly accused her of cheating, called her names and put her down which ‘belittled her’.

He made threats to throw acid in her face, ‘kick her teeth in’, burn her house down and get her sacked from her job.

She was physically assaulted, with Glassey spitting at her, pulling her hair, pushing her against a wall and stabbing her in the leg with a pen. He also threatened to rape both of his girlfriends.

His actions left the second victim ‘in fear, feeling trapped and believing that she was responsible’ for what he was doing.

The abuse came to a head in April last year, when she was at a colleague’s leaving party and another workmate noticed that Glassey had attempted to call her more than 100 times.

Glassey, of Warrington, Cheshire, admitted controlling and coercive behaviour and harassment during an earlier court hearing and was jailed for 27 months.

Detective Constable Leanne Brundrett, who led the investigation, said after he was jailed: ‘To many of his colleagues, Glassey was a well-respected and committed volunteer but behind closed doors he was a different person – he made his victims lives a living hell.

‘He tormented, violated and abused them both physically and emotionally, and the impact that it has had on them is unimaginable.

‘Thankfully, as a result of the bravery and courage that these women have shown throughout the investigation, Glassey is now facing the consequences of his actions.

‘I hope that his conviction and the sentence handed to him will allow them to finally move forward with their lives.

‘This case demonstrates the fact that anyone can be a victim of controlling and coercive behaviour.

‘By raising awareness of this case, I hope it helps other people spot the signs of coercive and controlling behaviour and to recognise that it is abuse and there is help available.

‘This type of controlling behaviour is designed to make a person dependent by isolating them from support, exploiting them, depriving them of independence.

‘Nobody should have to suffer in silence, and I hope that Glassey’s conviction will give other potential victims the confidence to come forward and get the support that they deserve.’

Glassey was suspended from the force when the allegations were first made against him in 2019.

Superintendent Chris Warren, head of Cheshire Police’s professional standards department, said: ‘Glassey’s actions were inexcusable, and I welcome the sentence handed to him.

‘As a serving special constable he held a position of trust and was well aware of the law, but sadly he chose to ignore it.

‘As soon as the allegations against him came to light Glassey was suspended from the force, and he will now be subject to a fast-track hearing for gross misconduct to determine what action will be taken by the force.

‘Cheshire Constabulary is committed to investigating any allegations, no matter who the alleged offender is.

‘Police officers, staff and volunteers are not above the law and will be treated in the same way as any other suspect.’