Police have launched an investigation after violent sexual threats were sent to a leading Brexiteer MP.

Among the vile comments were a demand that the MP ‘f*** herself with a roll of barbed wire’.

The troll also said they hoped a ‘swarm of Asian Hornets fly up your c*** and sting you’.

Ms Jenkyns made clear she believes the abuse is related to her tough stance on Brexit.

The Morley & Outwood MP has condemned Theresa May’s Chequers compromise plan and called for her to be replaced by a genuine Brexiteer.

Mother-of-one Ms Jenkyns wrote on Twitter: ‘Thank you to Tim who sent me this vile email last night. (Apologies tweeters for this appauling (sic) language).

‘We will not let these people beat us down. Going to keep fighting for Brexit.’

Ms Jenkyns has reported the message to the Parliamentary authorties.

Another Twitter user flagged the abuse to the Metropolitan Police, who are interviewing Ms Jenkyns about it. 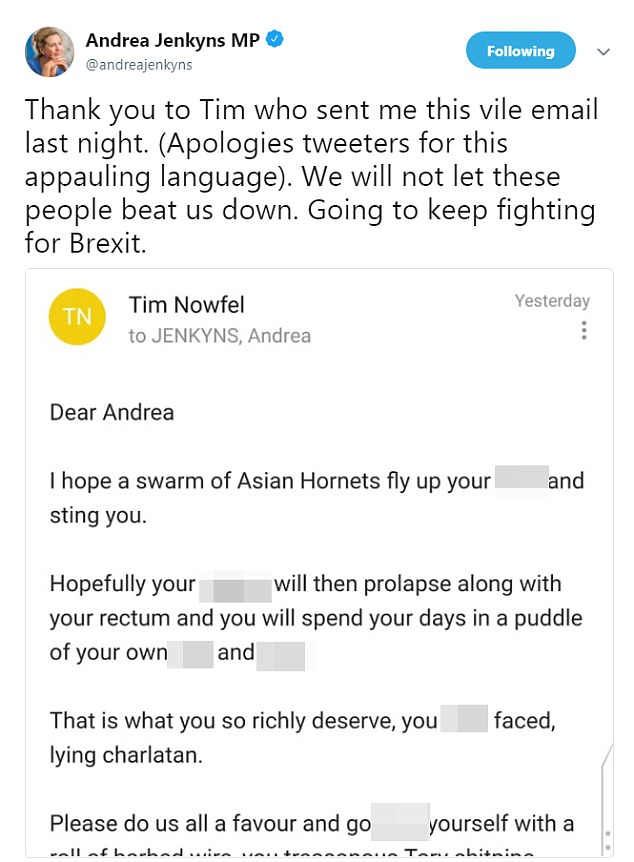