In an extraordinary photo, dozens of shocked customers are searched by police after a raid on an Amsterdam-style ‘cannabis cafe’ where drugs were brazenly being sold for as little as £3.

More than 150 officers stormed the venue on Thursday night and detained 52 people inside – confiscating cannabis worth £20,000.

Before the crackdown, the shop had been doing a roaring trade in marijuana products – including super-strength skunk, freshly-baked hash brownies and cannabis-infused energy drinks.

Police questioned more than 50 people after they raided a cannabis cafe allegedly selling illegal drugs from its premises in Limehouse, east London yesterday

Operating in a converted railway arch in Limehouse, east London, the cafe, called The Den, looked like a social club with leather sofas, a pool table and tropical fish inside two large tanks.

Punters included businessmen relaxing at the end of a long day and students, police said.

Drugs were openly sold from a menu taped to the bar and included varieties named ‘Lemon’, ‘Amnesia’ and ‘Biscoff’.

Hash brownies – which officers found still warm in the oven – were being sold for £3 while a 6.5g bag of hash cost £50, according to unapologetic menus found in the premises. 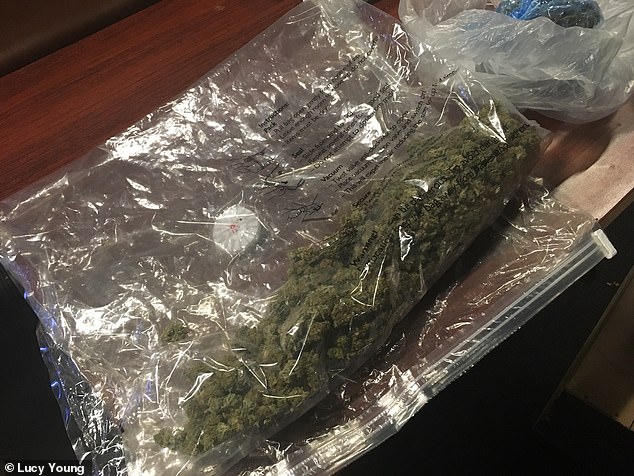 Officers found cannabis worth up to £20,000 during yesterday’s raid on The Den cafe

Officers also found wads of cash and dozens of pre-bagged deals of cannabis inside the cafe, which has been operating for at least several months.

The venue was surrounded by high-security, with CCTV cameras trained on the entrances, and a reinforced steel door which could be locked from the inside.

Punters needed a membership card to join the cafe, which is advertised on social media and through word of mouth. They were frisked on entry.

A sign on the door read: ‘No food from outside. Support our snack and beverage bar. Strictly no persons under the age of 20. You will be refused entry. No hoodies. Smile for our cameras! Please keep the noise levels down while entering and leaving The Den.’

Officers found a bag full of business cards advertising the cafe, which were written in English, Arabic and Russian. 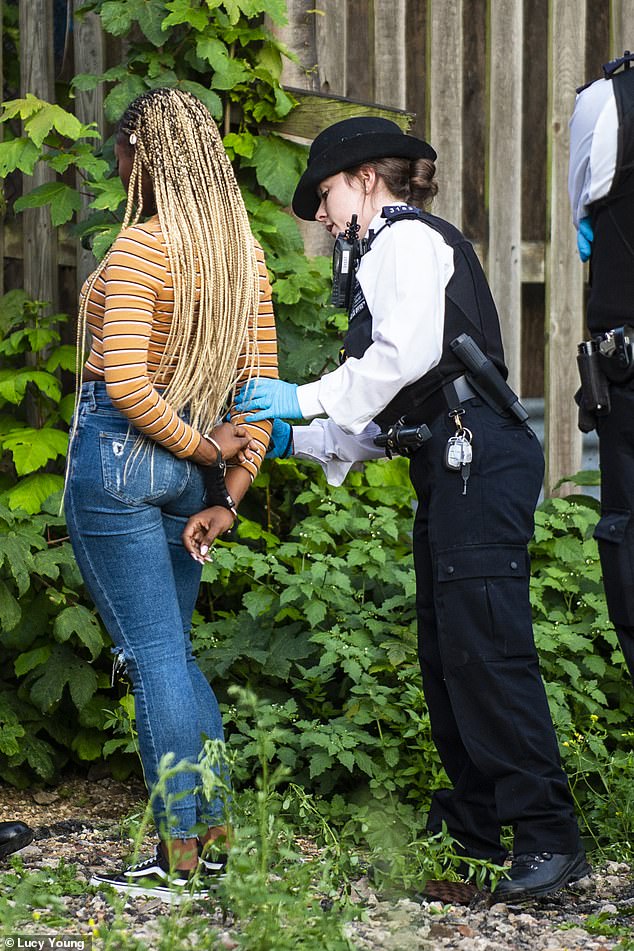 Police found a total of 52 people inside the cafe during the raid, all individuals were questioned and many received cautions

The raid on the cannabis cafe, witnessed by the Daily Mail, is the fourth of its kind in four weeks in east London. Police have applied to the courts for The Den to be permanently shut down.

Of those detained, one man was arrested for possession of a class-A drug and a handful of others who were caught in possession of cannabis were given police warnings.

The majority were released with no further action, which the Met called a ‘proportionate response’.

All those detained were searched methodically in a tent erected on wasteland behind the cafe.

Dozens of officers were involved in detaining the customers, who were mostly men aged between 18 and 30.

One of the other raids has seen a man charged and charges are pending for two others. Some 60 people have been arrested as a result of the crackdown.

The busts have formed part of Operation Continuum, a local operation tackling organised drug dealing and associated crime. The initiative began 18 months ago and has seen more than 350 arrests, and over £350,000 seized in cash.

Detective Superintendent Mike Hamer said: ‘There was a real cross section of people coming to the venue, including students and local residents and even some business people at the end of their working day. The main aim was to close this place down.

‘It is organised criminality, and I think people are unaware of the links with violence in the chain of supply. This activity was in response to local community concerns.’

He wanted to ‘ensure that the public feel they are being listened to’, adding: ‘People involved in this type of criminality should know that we are on to them. 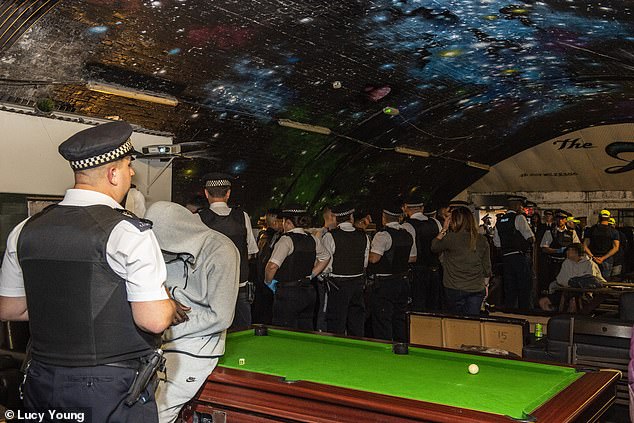 ‘Whilst the causes of violent crime are highly complex and wide-ranging, drug dealing is inextricably linked with a high proportion of the violence we have seen on our streets.’

Mr Hamer said that his officers ‘regularly see young people and the more vulnerable within our communities, targeted and exploited by those who seek to sell drugs, who often instigate violent acts and place young people at risk of harm and criminalisation in the process’.

And he warned would-be criminals: ‘There is no hiding place for those who peddle drugs.’

He added: ‘We will continue to target those involved in all aspects of the drug trade, many of whom are failing to recognise or care about the damage their activities are inflicting on society and our most vulnerable communities.’