Police in a New Jersey beach town have released body camera footage showing the violent arrest of a Philadelphia woman accused of underage drinking over the Memorial Day weekend.

A bystander posted video online showing a Wildwood police officer punching Emily Weinman in the head during the Saturday arrest.

The 20-year-old woman faces several charges, including aggravated assault on a police officer.

The body camera footage released on Wednesday shows an officer as he confronts and argues with Weinman over the discovery of alcoholic iced tea drinks in her possession. 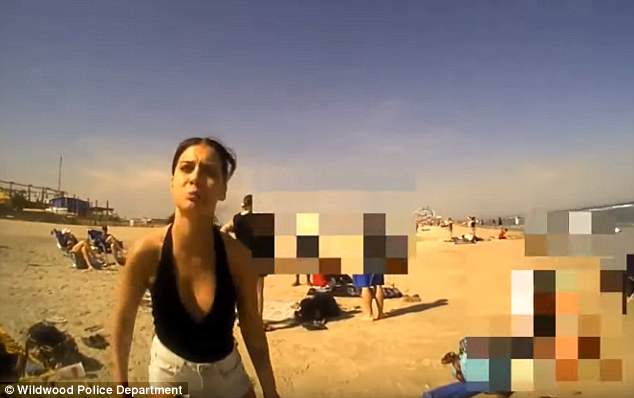 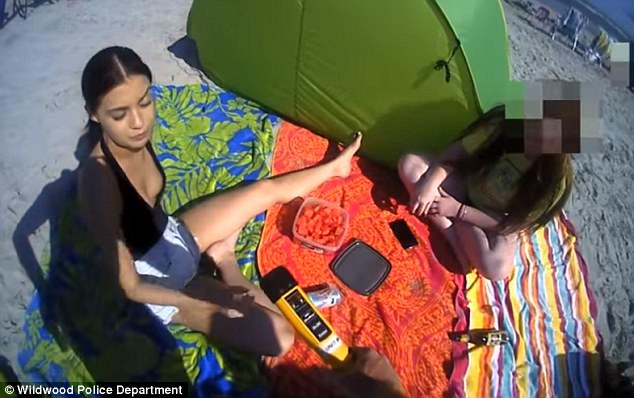 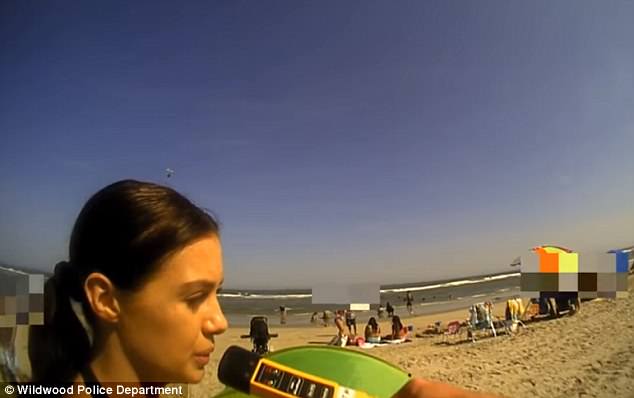 Weinman is seen above taking a breathalyzer test, which she passed

Officials said that the video does not show Weinman kicking one of the officers in the groin, which precipitated the violent arrest.

Wildwood police released three videos on Tuesday of the incident. 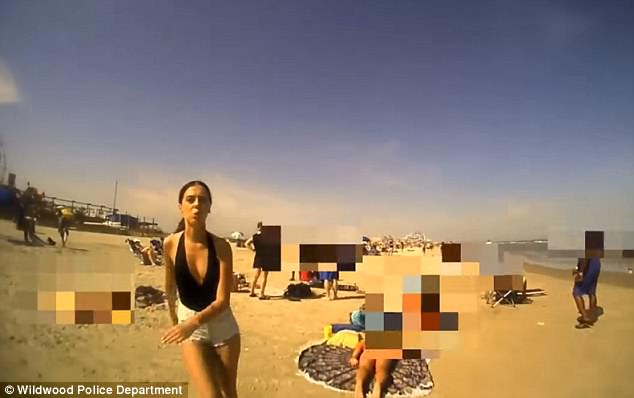 After Weinman refused to give the officers her last name, they indicated they would arrest her 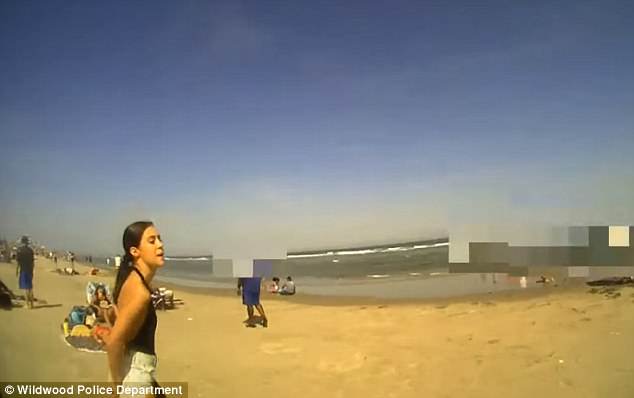 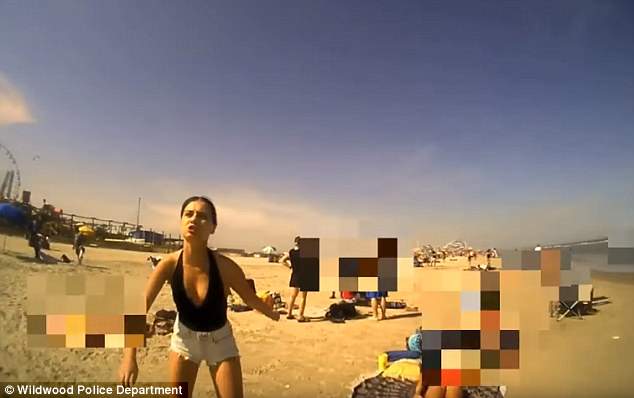 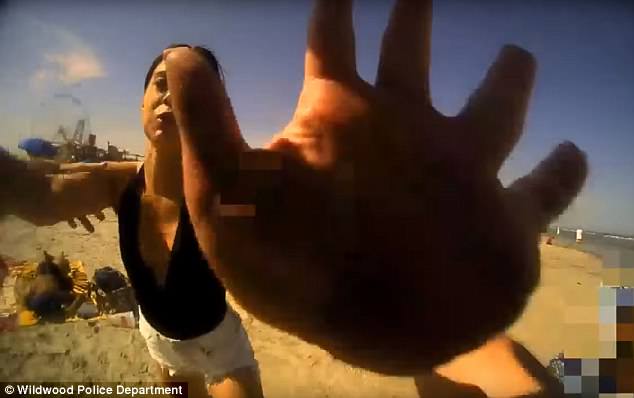 Weinman is seen above lunging at one of the officers, resulting in the bodycam being turned off momentarily

The first video shows one of the officers approaching Weinman and a friend who are suspected of underage drinking.

The officers then ask Weinman to take a breathalyzer test

An officer confronts Weinman and a friend about underage drinking and makes her take a breathalyzer test.

After Weinman blows her breath into the breathalyzer machine, she grows agitated.

‘Is there a problem?’ she says to the officers. ‘Mind your business.’

Weinman then tells the officers: ‘I know that didn’t come out positive. I didn’t take a drink of anything.’

One of the officers then asks the friend to take a breathalyzer. At the same time, Weinman is seen dialing a phone number and making a telephone call, presumably to her aunt.

When the breathalyzer comes back negative for both Weinman and the friend, one of the officers says that he will ask the two women to empty their alcoholic beverages on the beach.

In the next video, Weinman and the officers begin to argue over whether there were any laws broken.

In New Jersey, anyone under the age of 21 is not allowed to ‘purchase, consume or possess’ an alcoholic beverage in a ‘place of public assembly, public place or public conveyance.’ 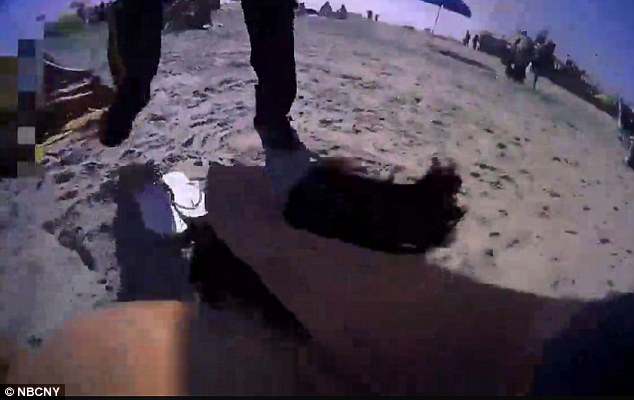 When the camera comes back on, the officer is seen holding Weinman’s head against the sand 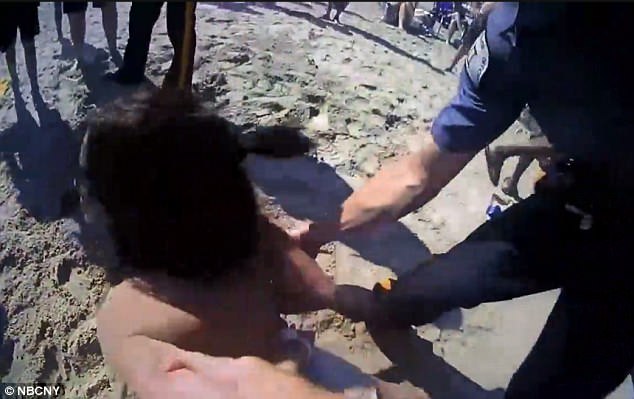 Weinman is resisting arrest and yelling epithets at the officers 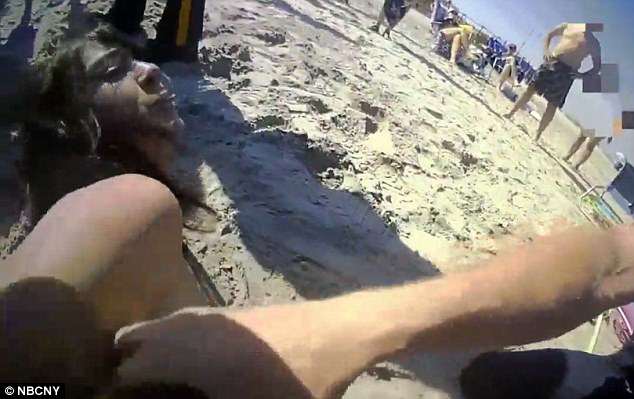 At one point, as the officers handcuff Weinman, she turns around and spits at one of them 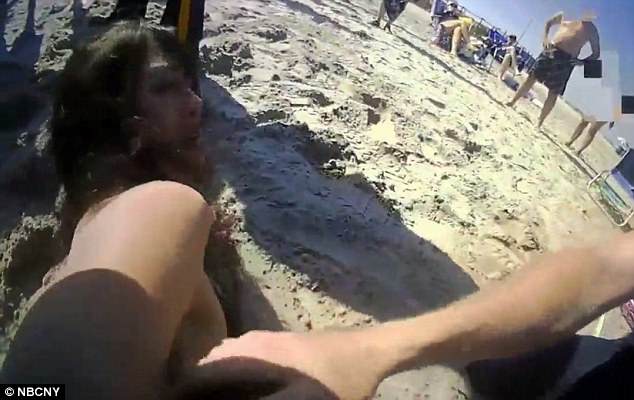 The officers have claimed that Weinman was the first to attack them by kicking one of them in the groin, which is not seen in the video

Weinman argues that because the beverages were unopened, that means she wasn’t breaking the law.

But the officers responded that the beverages were ‘in open display’ and could be seen.

One of the officers is seen taking down the information of Weinman’s friend.

At this point, things begin to escalate between Weinman and the other officer, who accuses her of ‘not cooperating.’

‘I didn’t disrespect you, I didn’t do anything to get written up, did I?’ Weinman tells the officer.

She then asks the officer if he intends on arresting her for obstruction even though she was at the beach with her 18-month-old daughter.

The officer tells Weinman she is ‘causing a scene’ after she refuses to give her last name and identify herself.

‘I’ll give you one more chance to give me your last name,’ the officer tells Weinman. 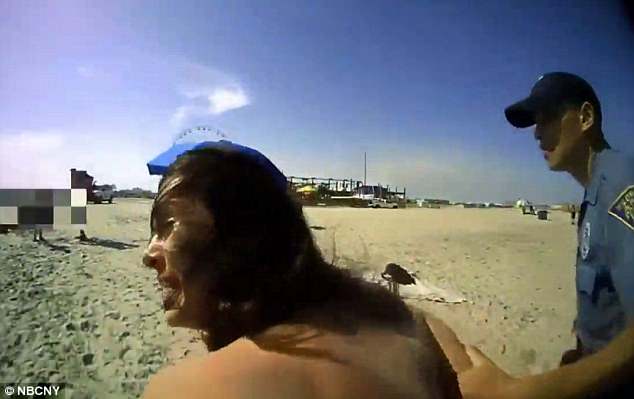 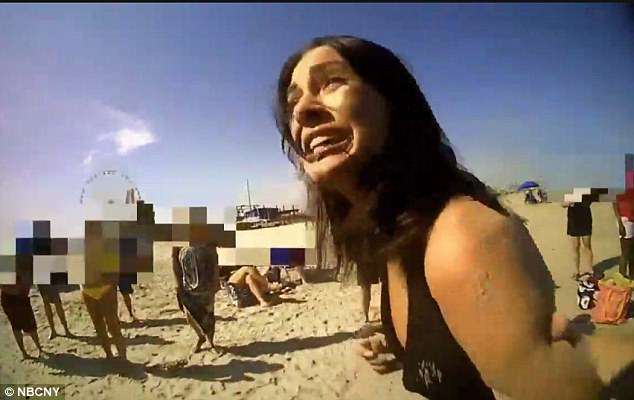 ‘My daughter is right there seeing this,’ Weinman screams. ‘I didn’t do anything wrong!’ 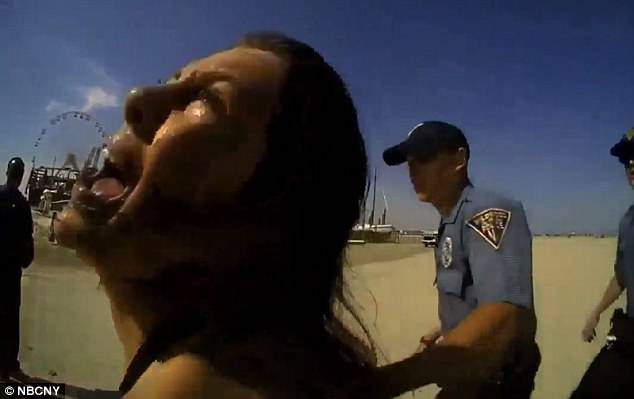 ‘You can’t lock me up,’ she responds. ‘I didn’t disrespect you.

‘And I don’t need to give you my name… You’re mad because you thought we were drinking.  You’re breathalyzer came up negative.’

The officers then ask Weinman where her aunt is, to which she replies: ‘She’s on her way.’

The officer then asks: ‘OK, what’s your last name?’

When the officer asks his partner if he has handcuffs on him, Weinman reacts angrily and begins to walk away.

‘Get over here,’ the officer says.

‘Don’t f*****g cuff me,’ Weinman replies as she steps away from the pursuing officer.

‘You’re about to get dropped,’ the officer says.

As the officer walks toward her, Weinman puts her hands up and appears to touch the camera.

The video then turns off.

The officers would later claim that it was at this point that Weinman kicked one of them in the groin, which ignited the more violent confrontation that was seen right afterward in the 30-second clip uploaded to social media.

The third body-cam video begins at this point.

One of the officers is seen grabbing Weinman’s hair.

The officer then forces her to the ground while she screams and physically resists.

Weinman then yells profanity at the officer while screaming at him to let her go.

This is when a fist is seen hitting Weinman three times.

‘You’re not allowed to beat me like that,’ she yells. ‘I’m a woman it doesn’t matter!’

The officers then begin to handcuff her. 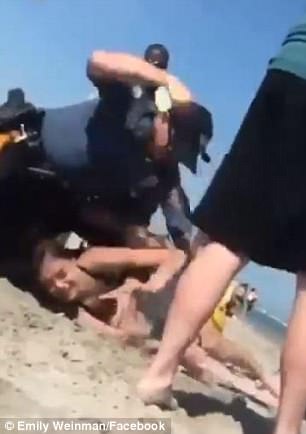 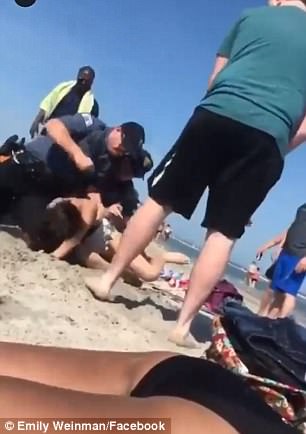 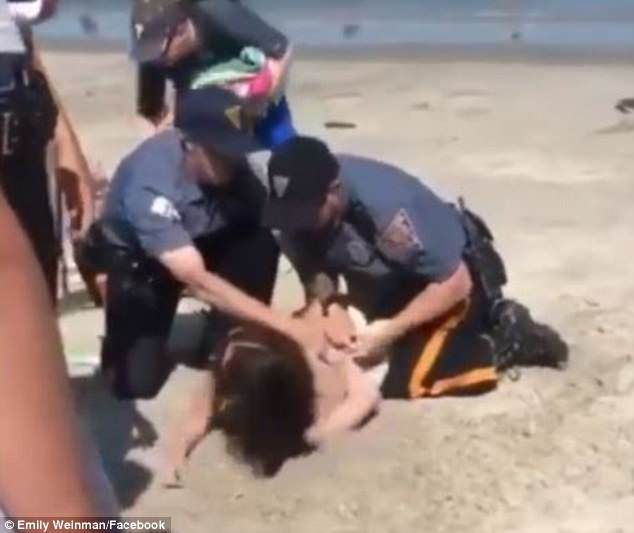 Weinman claims officers hit first, while cops say it as Weinman who threw the first kick

‘My daughter is right there seeing this,’ Weinman screams. ‘I didn’t do anything wrong!’

Weinman then spits again at one of the officers as they place her in handcuffs and take her into a police vehicle.

The video ends with the officers reporting what happened to another officer.

‘She kicked him and I just hit her a couple times,’ one of the officers says.

‘And I put her in cuffs and locked her up.’

On Facebook, Weinman posted a message that she later deleted, saying that she was underage and in possession of alcohol.

She wrote that the passed the breathalyzer and that the alcoholic beverages she had were not opened.

‘Therefore I asked them don’t they have something better to do as cops than to stop people for underage drinking on the beach, saying to that there’s so much more serious stuff going on,’ Weinman wrote.

‘The cop said, “I was gonna let you go but now I’ll write you up” and he asked my name.’ 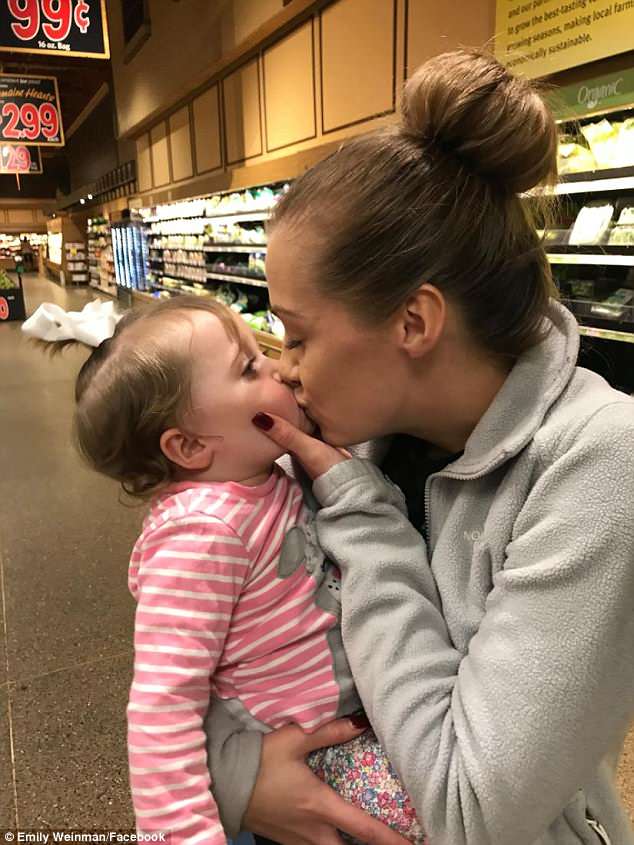 Weinman, who has an 18-month-old daughter (both pictured), said she shared the video because the ‘situation was handled wrongly and blew out of proportion’

Weinman said she refused to give her last name because she ‘didn’t do anything wrong.’

‘I tripped and fell and the cop tackled me to the ground and smashed my head into the sand,’ Weinman wrote.

‘At that point I blacked out and fought any way possible trying to get up and push him off me.’

Weinman does not mention anything about the police allegation that she kicked one of the officers in the groin.

‘Like I said I didn’t do anything wrong and anything could’ve been written on that paper, the whole situation was iffy and I didn’t trust it,’ she wrote.

‘Especially being aware of the fact of how grimy law enforcement can be now a days.’

‘My perception is the same,’ Dicht told NBC 10 TV.

‘My reaction is the same. It’s an overreaction to the situation and an excessive use of force.’

The officers were placed on administrative duty pending the results of an internal investigation.

‘From what I see on the video and only on the video, from not even talking to the officers, I think they did a decent job,’ Regalbuto said.

‘I think we could have done a better job at trying to explain to her, but it didn’t appear Ms. Weinman wanted to hear what we had to say.

‘She tried to tell us it was okay for her to possess alcohol and that doesn’t make any sense.’

In the video, the officer says ‘That’s it’ before he approached Weinman, but Regalbuto insists that this does not mean there was intent to injure her.

‘It appears to me like he was trying to use a pressure point strike to be able to bend her arm, but the [internal affairs unit] hasn’t done the interview yet so we will find out from the officers themselves,’ Regalbuto said.

Underage drinking is a common occurrence during the spring and summer months, when typically quiet towns along the Jersey Shore are inundated with beachgoers, especially on weekends.

‘It’s just a shame that all she had to do was comply,’ Troiano said.

‘She probably would have just gotten a citation. Once the officer says “you’re under arrest”, he has to continue with that arrest.’

Authorities also noted that Weinman has a criminal record.

Court records indicate that the Philadelphia resident was once brought up on simple assault charges for breaking into the home of a woman she suspected was involved with her boyfriend.