The images of 13 protesters have been issued in the hunt for thugs who left five police officers seriously injured during protests outside the Iranian embassy in London.

Trouble flared at a demo following the death of 22-year-old Mahsa Amini, who was allegedly tortured to death after being arrested in Iran by Tehran’s morality police for ‘wearing her hijab too loosely’.

Demonstrators pelted police officers with missiles – including bricks and bottles – as they tried to storm the Iranian embassy in Knightsbridge, west London, on Sunday, with many chanting ‘Death to the Islamic Republic!’

Some officers, who were seen using batons, suffered broken bones and were taken to hospital.

Now detectives have released 13 images of people they want to question in connection with the disorder. 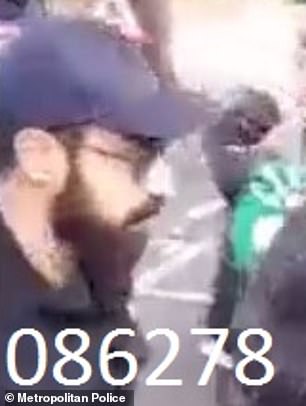 Met Police chief branded the violence ‘unacceptable’ and vowed to track down the culprits who they say had ‘blatant intent’ to cause injury.

Commander Karen Findlay, responsible for the Met’s Public Order Crime Team, said: ‘Everyone who plans and seeks to lawfully protest, and communities in the vicinity of such protest, deserve to feel safe.

‘Nobody should be faced with the escalation of disorder we saw on Sunday.

‘We won’t tolerate members of the public, or officers who are doing all they can to maintain and regain order, being injured in any circumstance.

‘We are now doing everything we can to make sure those who committed the violent offences are brought to justice.

‘This begins with identifying those with the blatant intent to cause injury by recklessly throwing items including pieces of masonry and bottles.’ 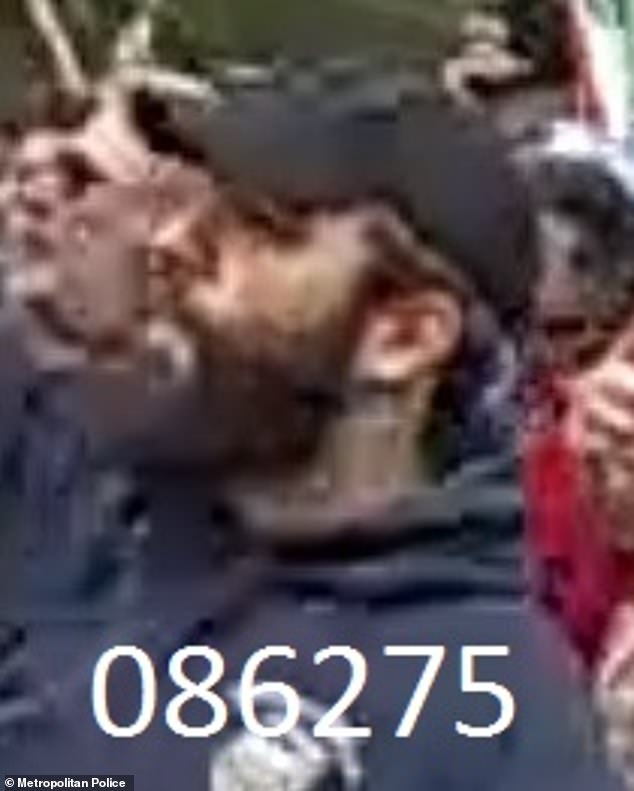 She added: ‘We need the public’s help and support to identify these people.

‘If you recognise anyone from viewing the images, then please come forward and contact us as soon as possible. You can do this anonymously.

‘Anyone who recognises any of the suspects or has any information about them is urged to contact police on 101 or tweet @MetCC and quote ‘Op Lakselva’.

‘Alternatively people can call Crimestoppers anonymously on 0800 555 111 with any information.’

The Mayor of London, Sadiq Khan, said: ‘The scenes that took place last night were completely unacceptable. The selfish minority who attempted to hijack a peaceful protest must be brought to justice.

‘The right to protest is a cornerstone of our democracy, but violence and attacks on our police and communities will never be tolerated. I am in close contact with the Met Commissioner and the police have my full support in pursuing those behind the disorder.

‘On behalf of all Londoners, I wish all the officers injured a swift recovery and urge anyone with information on those involved to call the police on 101 or Crimestoppers anonymously.’ 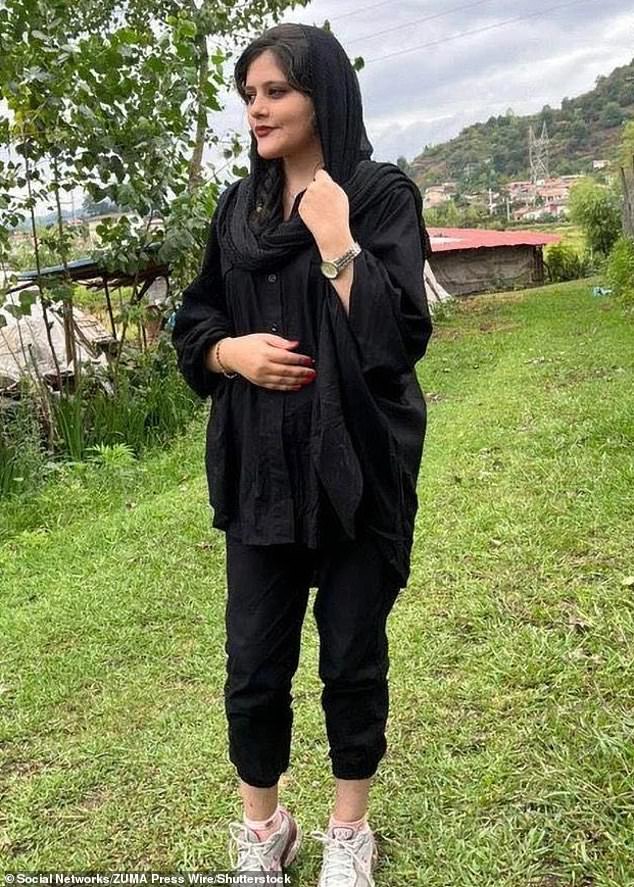 Mahsa Amini, 22, died in police custody after being detained by Iranian morality police over hijab laws 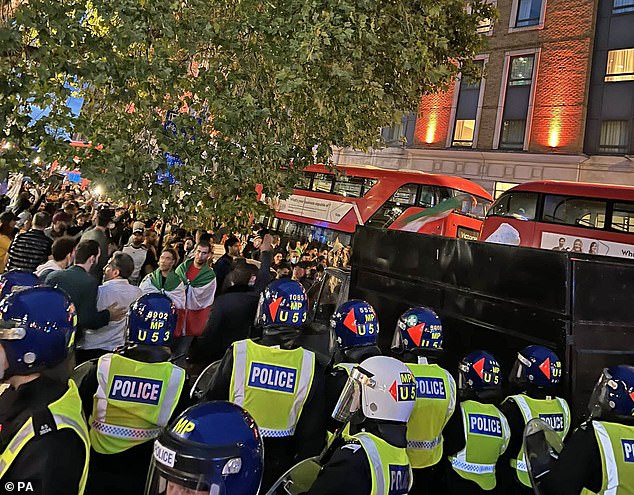 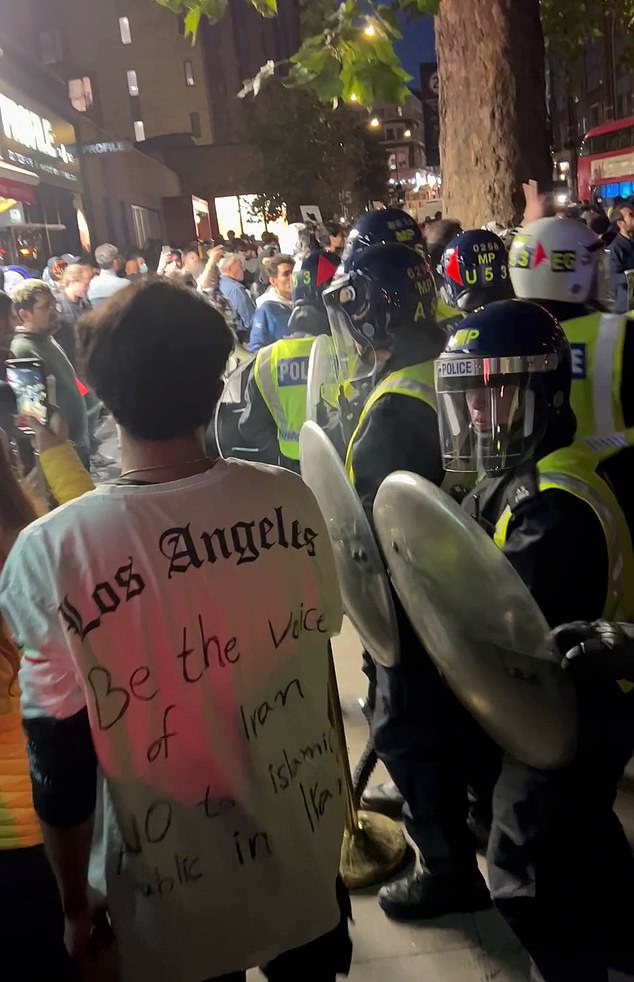 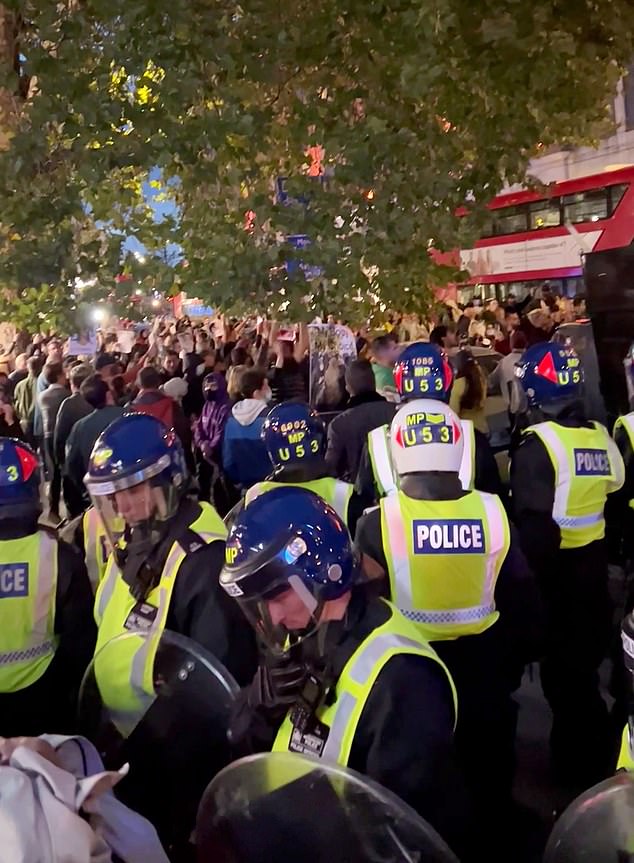 Crowds remained outside the embassy in Princes Gate, Knightsbridge, on Monday.

A large group of predominantly men, some wearing Iran’s pre-revolutionary national flag, continued to demand an end to the Islamic Republic of Iran as police did their best to hold them at bay.

Videos posted to social media showed missiles and a metal railing being thrown at the embassy and officers, as the line of police struggled to contain the crowd.

On Monday evening, a Met Police spokesperson said: ‘Officers continue to respond to demonstrations in the vicinity of the Iranian Embassy in Princes Gate, SW7.

‘On the afternoon of Monday, September 26 a number of protesters were involved in disorder.

‘One man has been arrested on suspicion of violent disorder and taken into custody. A significant policing presence remains the area.’

In Iran, officials say 35 people have been killed since protests broke out, though the figure is believed to be above 40. While clashes have continued in several cities across the world.