Authorities in Michigan have released photos of tattoos found on the body of a man who was discovered stuffed into a large plastic bag in the hope of identifying him.

The Gratiot County Sheriff’s Office says an autopsy revealed the victim found by a pair of hunters on Sunday in a ditch in Seville Township was about 60 to 70 years old. His cause of death was not released.

Investigators are seeking help from the public in identifying the man, who had distinctive body art. 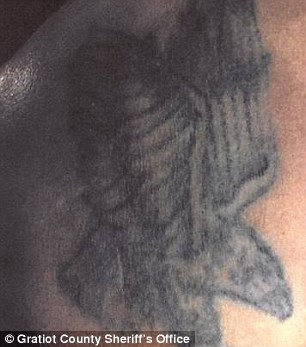 Distinctive markings: The Gratiot County Sheriff’s Office has released photos of tattoos depicting a skull in a cowboy hat (left) and an eagle (right) found on the body of a unidentified man who was discovered in a plastic bag dumped in Michigan

A tattoo of an eagle is on his right shoulder and a tattoo of a skull wearing a cowboy hat and neckerchief is on his left shoulder, along with the words, ‘Michigan,’ ‘Texas’ and ‘Florida.’

The victim also appeared to have suffered a recent injury to his left hand, since the middle and ring fingers were taped together.

According to a press release from the sheriff’s office, at around 10.30am on Sunday a pair of hunters came upon what looked like a large garbage bag resting in a ditch along Warner Road near Olive Road in Seville Township, located about 105 miles northwest of Detroit.

When they cut the bag open, they discovered the man’s body and immediately called 911. 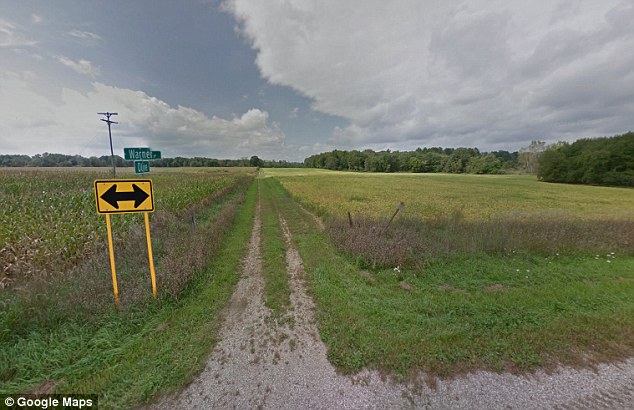 Two hunters made the gruesome discovery in a ditch along Warner Road in Seville Township, Michigan (pictured)

Gratiot County sheriff’s deputies responded to the scene and called Michigan State Police Crime Lab for assistance in collecting evidence. The body was transported to Sparrow Hospital in Lansing for an autopsy.

The post-mortem exam revealed the victim was approximately 5-foot-9 in height and weighed 185lbs, with medium length thinning brown or grey hair.

Sheriff Doug Wright tells WNEM the man’s body was in relatively ‘good condition,’ minus some injuries, including the ones to his left hand.

Anyone with information on the victim is being asked to call the sheriff’s office at 989-875-5214.