Police have stopped almost 30,000 people for not wearing a face covering on public transport in under a fortnight – but just 33 fines have been handed out, new figures have revealed.

Figures from the British Transport Police (BTP) show just a fifth (1,605) of the 28,964 people who have been spoken to by its officers in mid-July were told to leave the transport network for not wearing a face covering.

Of those people stopped between July 13 and July 25, just 33 were handed out a fixed penalty notice of £100, according to data released under the Freedom of Information request, the Telegraph reports.

Two were arrested after they refused to give details to police, but were de-arrested once their details were confirmed.

Meanwhile, Transport for London officials, who also have the power to slap commuters with fines, have stopped almost 54,000 people for not wearing face masks since July 4.

Police have stopped almost 30,000 people for not wearing a face covering on public transport in under a fortnight – but just 33 fines have been handed out, new figures have revealed. Pictured: A commuter wears a mask while travelling on the London Underground. 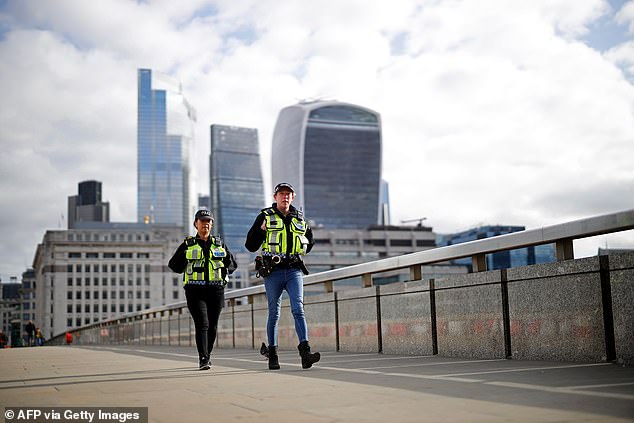 Figures from the British Transport Police (pictured: BTP officers in London) show just a fifth of the 28,964 people who have been spoken to by its officers in mid-July were told to leave the transport network for not wearing a face covering

‘With more people using transport the evidence suggests wearing face coverings offers some – albeit limited – protection against the spread for the virus.’

The figures come after Boris Johnson’s government introduced a new law making face coverings mandatory on all forms of public transport across from June 15.

Transport Secretary Grant Shapps announced the policy, aimed at reducing the spread of coronavirus on packed buses, tubes and trains, ten days before it came into force.

At the times, unions welcomed the move, saying it would give workers and travellers more confidence amid desperate efforts to get the economy back on its feet.

However the British Transport Police Federation, which represents rank-and-file officers on the transport network, said it was ‘difficult to police’.

BTP meanwhile claim compliance is as high as 97 per cent.

A spokesperson for BTP told the Telegraph: ‘The overwhelming majority of people have listened, complied and continued to play an important role in protecting other passengers and rail staff.”

Meanwhile, commenting on the London figures, a spokesperson for the Mayor of London told the Telegraph: ‘Londoners have shown that they want to do the right thing and the vast majority of people using public transport are wearing a face covering to keep themselves and others safe.’

‘To an extent, we’re reliant on people taking steps to protect themselves and others.’

Before the police was introduced, experts were split on whether face coverings could have a major impact, but the government’s Scientific Advisory Group for Emergencies (SAGE) committee concluded in June that they can be useful to stop people spreading the disease.

More than 40 transport workers in London had died from coronavirus when the policy was announced in June. 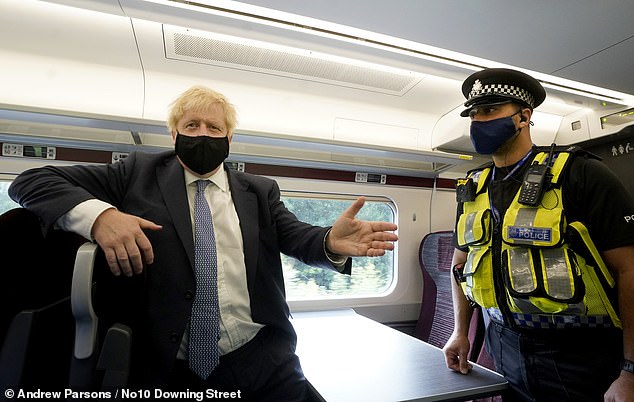 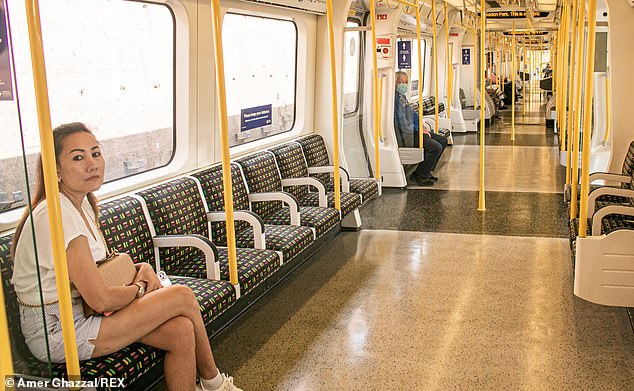 Speaking at the time, Mick Whelan, general secretary of Associated Society of Locomotive Engineers and Firemen (Aslef), said: ‘This is a sensible step by the Secretary of State for Transport.

‘We have been working closely with the government to ensure that agreed increases in services on Britain’s train, and Tube, network is done in a safe and controlled manner – to help spread the loading, and maintain social distancing – for the safety of passengers and staff.

‘The instruction to wear face coverings to help prevent the spread of the coronavirus will ease the concerns of people travelling, and working, on the transport network.’

Scientists concluded there was enough evidence to recommend the use of face coverings weeks before ministers issued the advice.

Experts said on April 21 that the public should be advised to wear coverings when social distancing is not possible, but ministers in England did not issue the advice until May 11.

‘SAGE advises that, on balance, there is enough evidence to support recommendation of community use of cloth face masks, for short periods in enclosed spaces, where social distancing is not possible,’ they concluded.

Despite Scotland and Northern Ireland issuing the advice to wear coverings, ministers in England did not give the guidance until publishing the ‘plan to rebuild’ nearly three weeks later.

‘As more people return to work, there will be more movement outside people’s immediate household,’ they said.

‘This increased mobility means the Government is now advising that people should aim to wear a face-covering in enclosed spaces where social distancing is not always possible, and they come into contact with others that they do not normally meet, for example on public transport or in some shops.’