‘Can I have my smokes?’ Riot officers crash tackle man accused of robbing a woman at gunpoint – and show little sympathy for his nicotine addiction

Riot squad police officers investigating the brazen daylight robbery of a woman  were forced to crash-tackle a suspect in a busy Sydney street.

Two men, aged 21 and 19, were accused of robbing the woman at gunpoint in Canterbury, in Sydney’s south west, on July 7th.

Burwood detectives investigating the case found the 21-year-old accused in Leichhardt and were forced to tackle him to the ground to get him to cooperate.

Three officers wearing bulletproof vests cuffed him before escorting him to the back of the police van and patting him down.

A second man was arrested at a home in Canterbury during the raids. He is also accused of participating in the armed robbery

The man appeared more concerned about losing his packet of cigarettes than the arrest, but was ignored by officers when he asked for them to be returned to him.

Simultaneous raids were taking place at two homes in Canterbury and Marrickville.

During the searches, investigators seized two replica firearms, a samurai sword, a stolen credit card and items of clothing.

A 19-year-old man was arrested at the home in Canterbury and taken to Burwood Police Station. 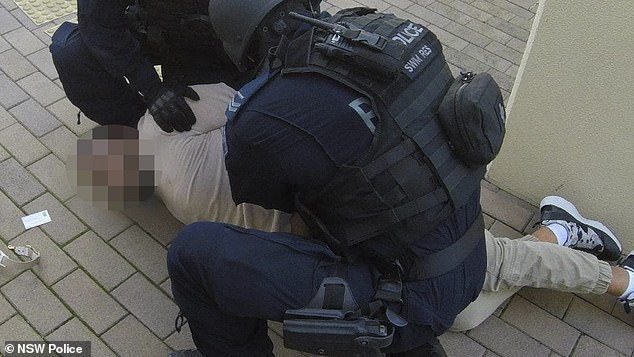 Both men were charged with armed robbery with a dangerous weapon in company and three counts of fraud.

Police will allege they attacked an unknown 24-year-old woman about 11:30pm on Sunday July 7th while she crossed a bridge over the Cooks River, in Canterbury.

They allegedly stole her mobile phone, cash and a credit card.

Both men were refused bail to appear in court on Wednesday. 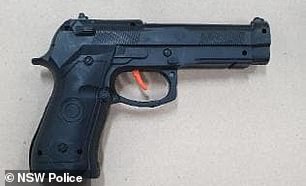 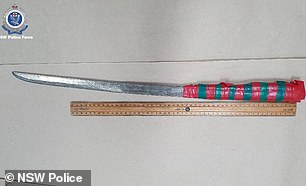