Police have been told to prepare for a spike in hate crime as the UK leaves the EU – despite confusion over how many offences actually take place.

Officials said the number of attacks fuelled by race and religion rose sharply following the Brexit vote in 2016.

However, a report by HM Inspectorate of Constabulary said there was a ‘fundamental problem’ with the accuracy of police data.

It found confusion because officers failed to record offences as hate crime in some cases and wrongly categorised them in others.

In half of the examples examined by the watchdog, the police response was deemed not good enough.

Police have been told to prepare for a spike in hate crime as the UK leaves the EU – despite confusion over how many offences actually take place. File image used

Some cases were flagged as hate crime without any apparent justification, while others were not raised when they should have been.

Despite the uncertainty, HMIC singles out March 29 next year – the date when the UK formally leaves the EU – as a potential flashpoint.

The Brexit referendum two years ago saw a rise in allegedly racist attacks, fuelling fears that far-Right yobs were using the vote as an excuse to legitimise prejudice.

But there were also concerns that Left-wing campaigners were labelling high-profile offences as ‘hate crimes’ without evidence to further their political agenda.

Hate incidents are defined as those motivated by hostility based on a personal characteristic.

In the HMIC review, figures showed that more than 3,000 recorded racially or religiously aggravated offences were not flagged as hate crimes.

In one force, an audit of 700 hate crimes showed as many as half of the crimes motivated by religion should have been recorded as race. 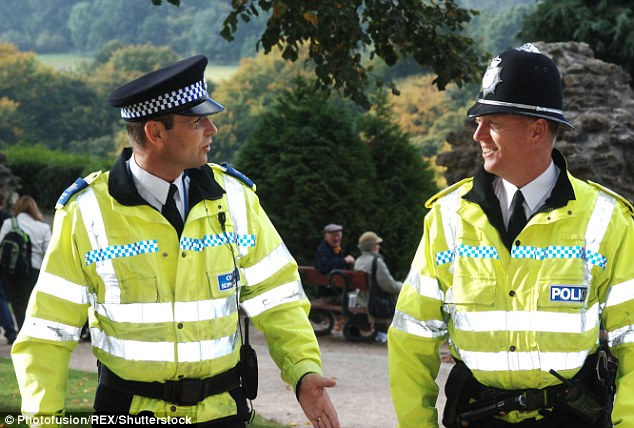 Despite the uncertainty over hate crime figures, Her Majesty’s Inspectorate of Constabulary singles out March 29 next year – the date when the UK formally leaves the EU – as a potential flashpoint for police dealing with more hate crime. File image used

There were ‘very serious problems’ in two areas, which led inspectors to conclude hate crimes were recorded wrongly, or where there was no evidence of hate at all.

Wendy Williams, who was responsible for the report, said she found an ‘inconsistent picture’ between forces, and victims were often ‘let down’.

However, she added that there were some good examples of police work.

The HMIC report said: ‘There is a real possibility that there will be a similar increase in reports in 2019 if, as is anticipated by the Government, the UK formally leaves the European Union.

‘Police forces should prepare for this eventuality and make sure that the recommendations in this report are used in the future to improve the police response to hate-crime victims.’