Police have urged people to search their sheds and outbuildings for a missing teenager who vanished into woodland after ‘falling from his bike’ in Belfast.

Officers searching for Noah Donohoe, 14, believe he may have sustained a head injury which caused him to ‘behave in a way that is not normal’ ahead of his disappearance on Sunday.

He was reportedly seen cycling his black Apollo mountain bike while naked shortly before he was spotted for the last time near to Shore Road at around 6pm.

PSNI Superintendent Muir Clark today asked those in the area to check their properties and cars for Noah as he ‘may be seeking either shelter because he has no clothing or money, or he may not realise where he is.’

The teenager’s mother Fiona last night made an emotional plea for residents to open up their homes to be searched for her ‘thoughtful, loving darling’ as the hunt entered its third day.

Officers have recovered Noah’s bicycle, helmet, trainers and mobile phone, and have been searching a densely wooded area which he was reportedly seen heading towards.

Officers searching for Noah Donohoe (pictured), 14, believe he may have sustained a head injury and stripped naked ahead of his disappearance on Sunday 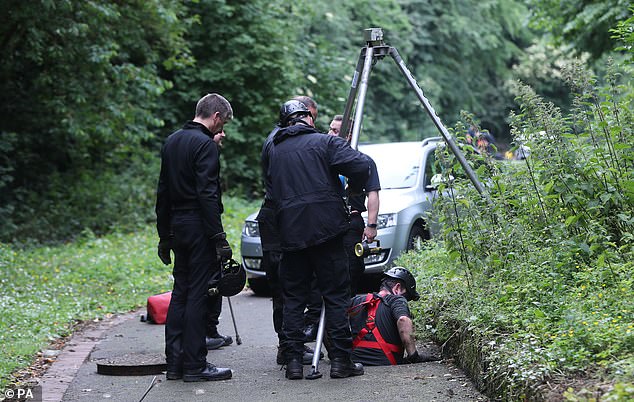 Mr Clark said: ‘This behaviour is completely outside Noah’s character. I need to know that all the outbuildings, all the places Noah could take refuge in, have been checked.’

Police supported by air support units, police dogs and a tactical support group have been searching the area for Noah alongside community rescue service colleagues.

Hundreds of volunteers today stepped forward to help in the search at Seaview Park, and Ms Donohoe said she was overwhelmed by the support.

Councillors Dean McCullough and Jim Crothers called on locals to knock doors and search the surrounding areas for Noah, with North Belfast MP John Finucane also assisting in the search.

Volunteer Caity Brown, whose brother shares a classroom with Noah at St Malachy’s College, told the Belfast Telegraph it was ‘absolutely phenomenal seeing our community come together to find a child.’

Mr Clark added the ‘best side’ of the historically divided community had been displayed as residents gave up their time to help locate the teenager. 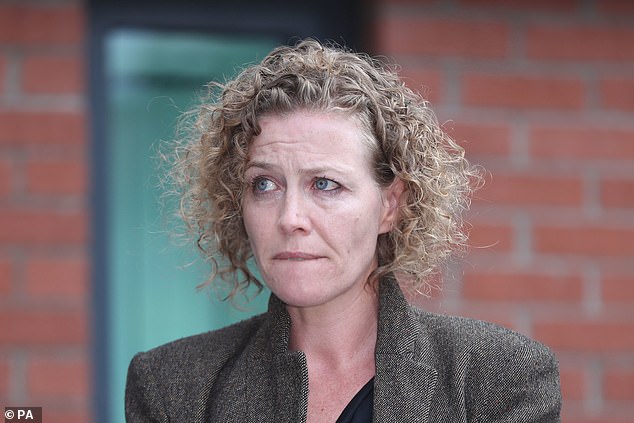 Hundreds of volunteers today stepped forward to help in the search for Noah, and the teenager’s mother Fiona (pictured) said she was overwhelmed by the support 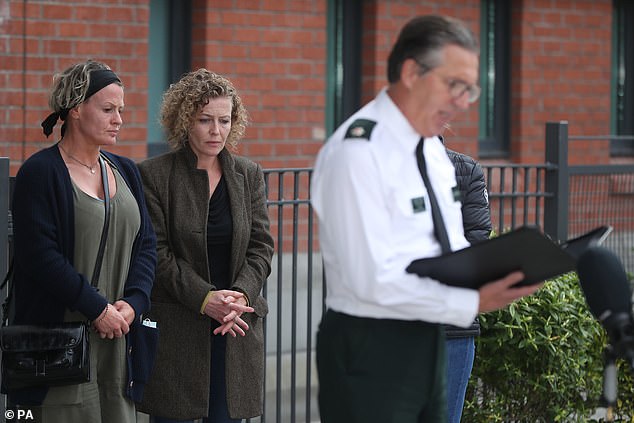 Fiona Donohoe (centre), the mother of Noah , outside Musgrave Police Station in Belfast after the 14-year-old was last seen in the Shore Road area of north Belfast at the weekend 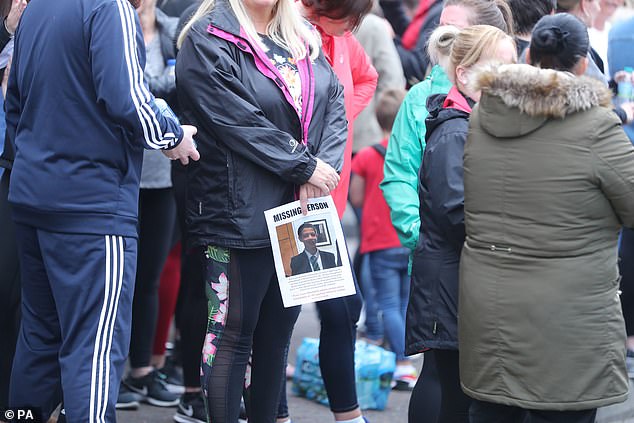 A volunteer holds a missing poster of Noah, 14, as they join in the search for the teenager 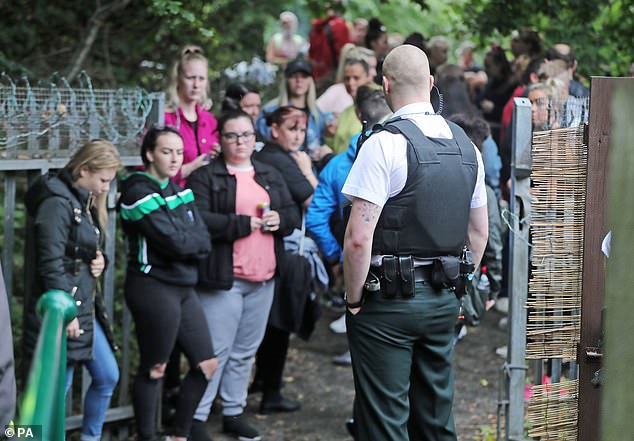 On Facebook, Noah’s mother Fiona said the overwhelming support from her neighbours had given ‘me and my family the strength to fight for him to be found.’

‘I just wish at this stage people would start offering for their houses to be searched so that shelter could be eliminated. I am begging people do this,’ she said today.

‘I know I am asking a massive thing but if you knew my Noah, he was the most thoughtful, loving darling who does not deserve to be suffering or unfound.

‘Please hear my plea, I am speaking for Noah – my baby.’

The teenager left his house in south Belfast at around 5.30pm on Sunday on his black Apollo mountain bike.

He was wearing a khaki green North Face jacket, a tie-dye light blue/navy hoody, grey sweat shorts with an emblem on one leg and a khaki rucksack at the time of his disappearance. 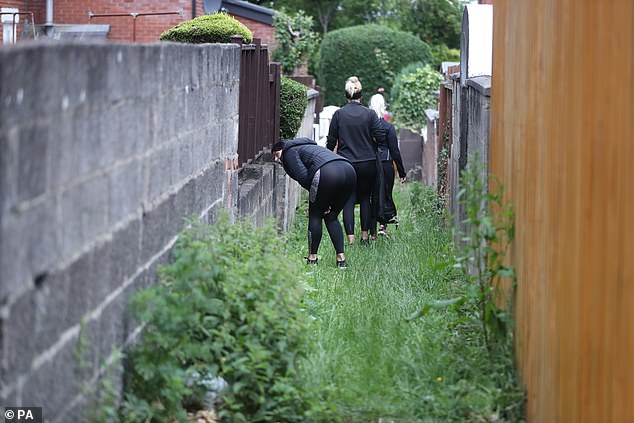 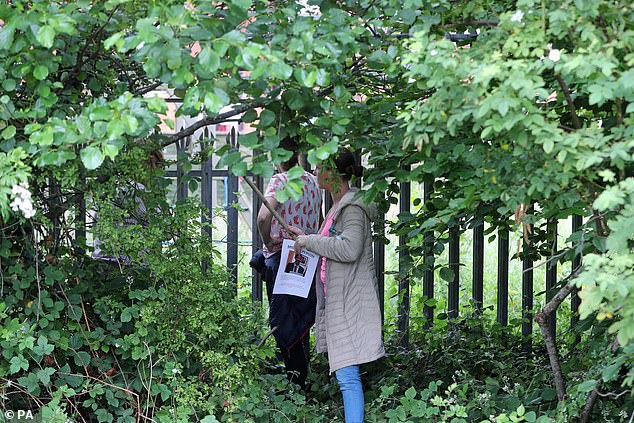 Noah was spotted on Ormeau Avenue at 5.45pm, before an eyewitness reported seeing a male matching his description fall from his bike and possibly injure his head in the North Queen Street/York Street area.

It is believed the teenager then got back on his bike and cycled to Northwood Road, where he stripped naked. He was last seen near to Shore Road at 6.08pm.

In a statement on Tuesday, the PSNI said: ‘An eyewitness believes they saw a young male matching Noah’s description fall off his bicycle on Sunday evening, possibly sustaining a head injury, in the vicinity of North Queen Street/York Street, but we do not know the specific time.

‘We believe Noah got back on his bicycle, cycling into Northwood Road where he then abandons all his clothing, as he is seen a short time later cycling while naked.

‘We believe Noah then dropped his bicycle and left the area on foot.’

Anyone with information is asked to contact police immediately on 101 quoting reference number 1619 of 21/06/20. 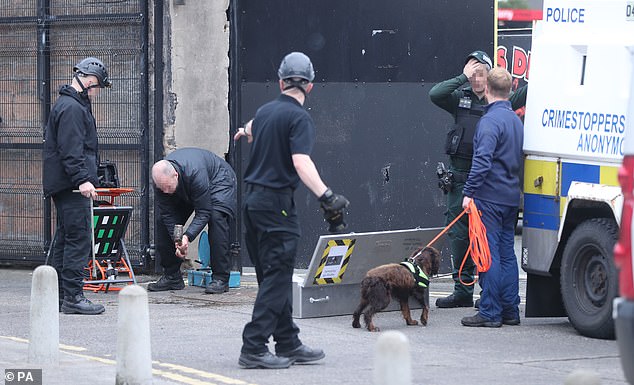 A police team inspects a drain during the search for missing Noah, who was last seen in the Shore Road area of north Belfast