An anti-vaxxer nurse who was arrested at a protest about the coronavirus lockdown has been criticised for taking her four-year-old son to the rally.

Renee Altakrity had her son, Isaac, ripped from her arms as she was placed in the back of a police wagon during the ‘Exercise My Rights’ protest outside New South Wales _Parliament House in Saturday.

The 36-year-old refused to give police her name and details as they tried to issue an infringement notice for breaking social distancing laws, and was subsequently arrested.

While Mrs Altakrity believes she was unfairly targeted, NSW Police Commissioner Mick Fuller on Monday said he supported his officers’ choices – and hoped the cosmetic nurse would plead not guilty in court.

‘I think the police showed an enormous amount of restraint. I certainly hope she pleads not guilty so that [police body cam] footage comes out,’ he said. 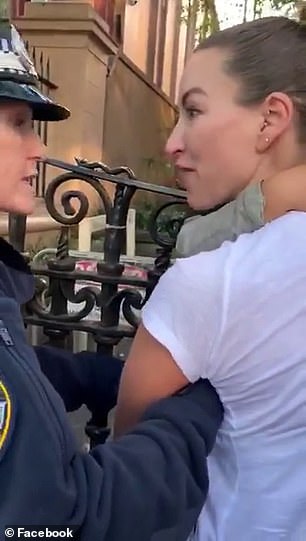 ‘They all went there knowing it was an unlawful protest so why you’re taking a four-year-old into that situation is beyond me,’ he said.

‘If this woman had given police her details at the scene, she would’ve been given a ticket and would’ve left… but she refused to do that. She caused this.’

But Mrs Altakrity argued her son wanted to be there to protest his own rights, too.

She told Daily Mail Australia he wanted to be there because he thinks skate parks should reopen.

‘The point for me exercising our rights is to stick up for ourselves and have freedom of speech,’ Mrs Altakrity said. 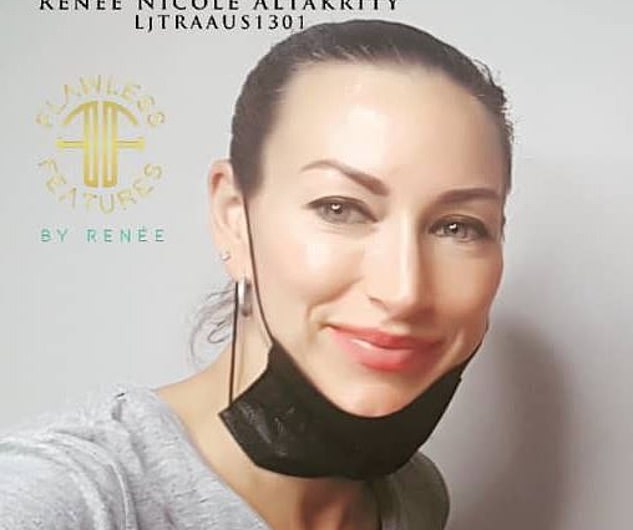 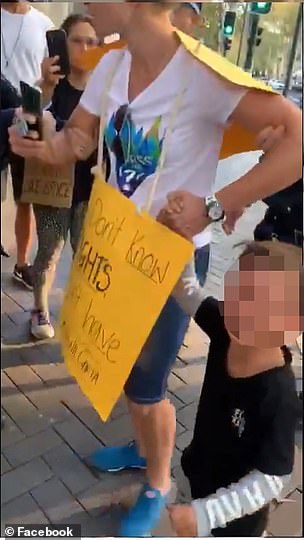 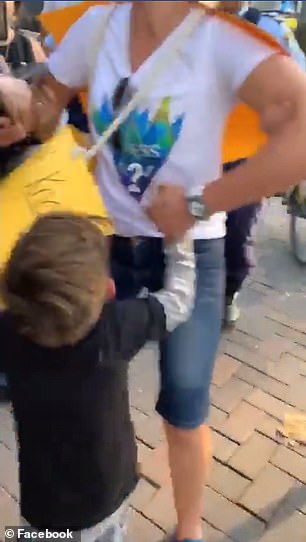 Police attempted to arrest the woman, while her son, Isaac, screamed and cried. ‘Mummy is not going,’ he said

‘My son wanted to come with me. He said: ”Mum can I come? I’d love to put a sign up about the fact that I want to go back to the skate parks and not feel scared”.’

‘I don’t keep my kids in the shadows… my children are very aware of what is going on and I think it is very important our children know how to handle themselves and have a freedom of speech, even at four.’

‘My children are very opinionated, they probably get that from me, but he had every right to be there.’

Up to 40 people gathered outside parliament house on Macquarie Street in Sydney from midday on Saturday as part of the ‘Exercise My Rights’ protest.

In addition to the COVID-19 restrictions, among their other grievances was the need for NRL players and those visiting aged care homes to have had the flu vaccination.

Mrs Altakrity admitted she was against vaccinations, but said that was not the main reason she was protesting. 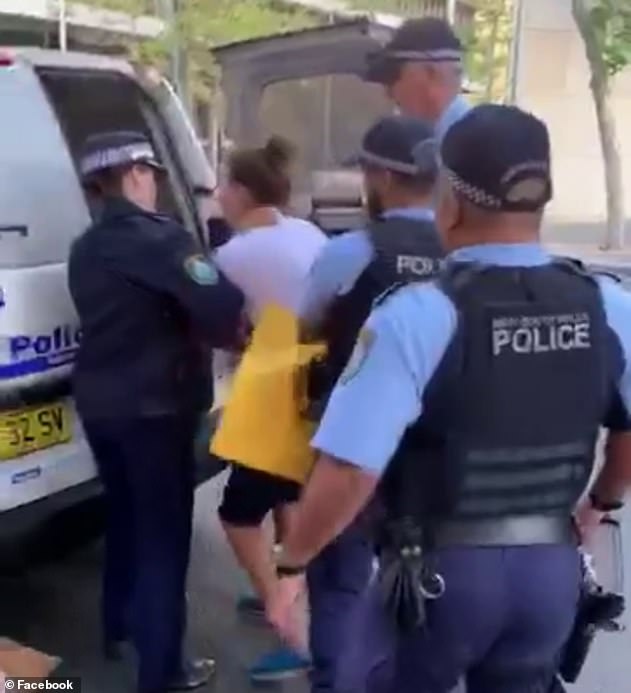 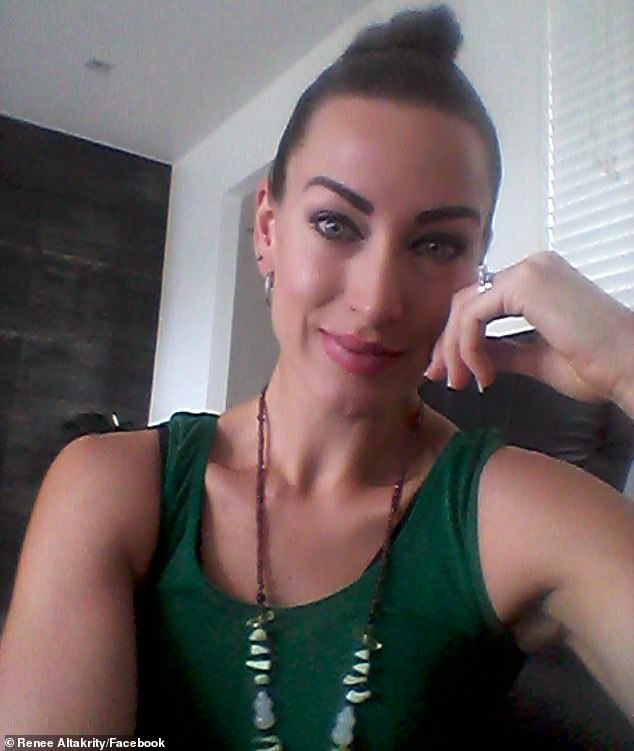 At Saturday’s protest she had a yellow sign hung around her neck that read: ‘If you don’t know your rights, you don’t have any. Magna Carta.’

When police officers approached her about 3.50pm she insisted she was not doing anything wrong, despite the government’s social distancing regulations.

But Commissioner Fuller said the group were, in fact, breaking the law.

They had not informed police of the protest and were also breaching the coronavirus restrictions, which urged people not to leave their homes for non-essential travel.

Disturbing video footage of the altercation showed police attempting to arrest the woman as her son screamed and cried nearby.

Mrs Altakrity resisted attempts to put her in the back of a paddy wagon and claimed she was not doing anything wrong.

The distressing footage concluded with police pulling the four-year-old away from his mum. An officer held him as he kicked and screamed.

Inside the police van, Mrs Altakrity posted a video to Instagram calling for help from her fellow protestors.

‘I’m in the back of a paddy wagon. They singled me out,’ she claimed.

‘If someone can please send legal representation. I cannot believe this is happening.

The alarming confrontation left viewers divided, with many slamming the mother for bringing her child along with her. 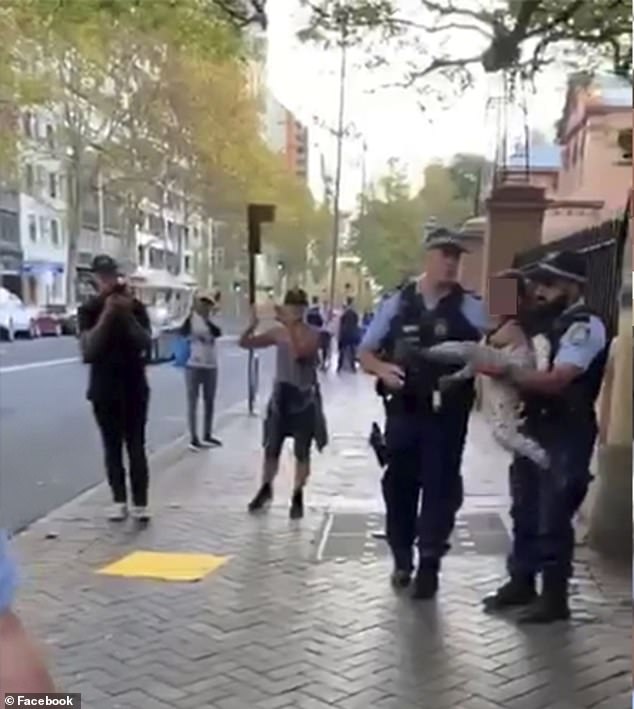 Pictured: A police officer holds on to the woman’s four-year-old son, Isaac, as she is arrested

She has been accused of offering beauty services at her Flawless Features salon, despite government orders that salons close under COVID-19 restrictions on March 25.

A NSW Police spokesperson confirmed they were aware of the complaint. The fine for breaching said restrictions is $5,000.

She has posts from just last week showing off the treatments she has done on clients.

Mrs Altakrity previously said she uses her ‘strong intuition’ when it comes to medical advice. 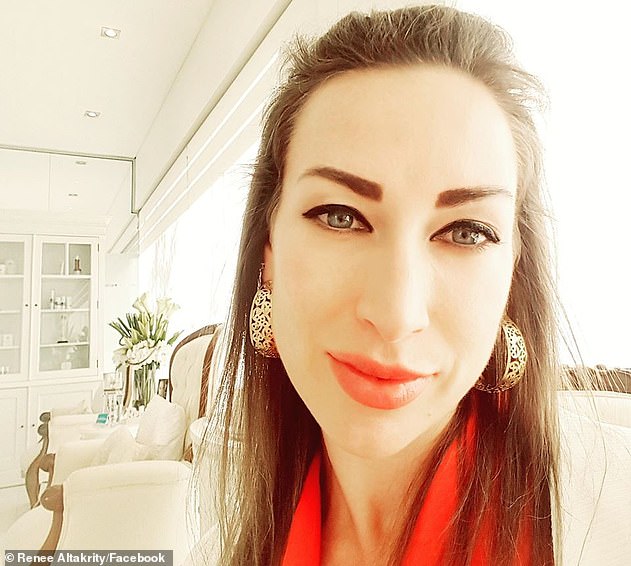