Police in Virginia are not pressing charges against two teenagers identified as having filmed themselves coughing on produce in a grocery store and uploading the video to social media.

Authorities are warning of the ‘disturbing trend’ which has appeared on social media as the coronavirus pandemic worsened, calling on parents to monitor their children’s actions online.

The incident in Purcellville, Virginia, some 55 miles from the White House, took place in a Harris Teeter store on March 18, the Washington Examiner reports, but police determined that there was no criminal intent involved.

Videos have been emerging on social media such as this one where a person pretends to cough in a grocery store and the other reacts to it. Police cautioned against the videos 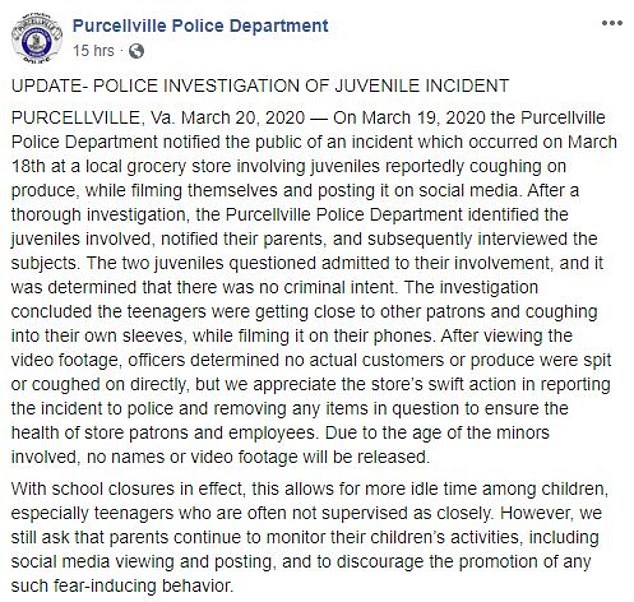 Purcellville Police Department released an update on Friday revealing that two teens involved in the incident were identified after being seen on Wednesday ‘reportedly coughing on produce, while filming themselves and posting it on social media’.

The store quickly informed the police and removed the produce involved, taking measures to ensure the safety of their customers from the coronavirus.

‘The two juveniles questioned admitted to their involvement, and it was determined that there was no criminal intent,’ the police statement read.

‘The investigation concluded the teenagers were getting close to other patrons and coughing into their own sleeves, while filming it on their phones.

‘After viewing the video footage, officers determined no actual customers or produce were spit or coughed on directly, but we appreciate the store’s swift action in reporting the incident to police and removing any items in question to ensure the health of store patrons and employees.

‘Due to the age of the minors involved, no names or video footage will be released,’ the statement added.

With schools closed to allow for social distancing to lessen the spread of the coronavirus, police also asked parents to monitor their children’s activities, including activities on social media ‘to discourage the promotion of any such fear-inducing behavior’.

‘With school closures in effect, this allows for more idle time among children, especially teenagers who are often not supervised as closely,’ police said.

‘We have learned that this appears to be a disturbing trend on social media across the country, and we ask for help from parents to discourage this behavior immediately.’

In Facebook posts under the police statement, people questioned why more wasn’t being done to keep children and teenagers at home when they are supposed to be social distancing.

‘Went to walk on W&OD today and saw a group of 5 teens walking across from the library. Kind of defeats the notion of cancelling school- even if in a small way,’ one man wrote.

I live in Village Case neighborhood and the kids have been out every afternoon, walking, biking, skateboarding in groups. Mostly looks like middle school aged kids,’ another woman added.

‘I support getting out into fresh air every day but these kids are congregating and socializing which defeats the social distancing guidelines. I pray they all stay well.’ 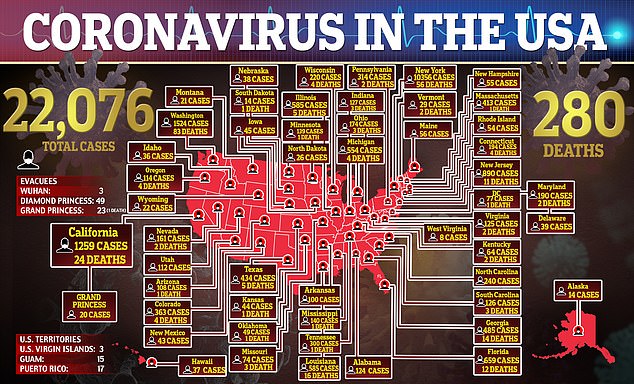 Some people called for them to be arrested as police have done in other social media challenges: ‘They should be arrested just as the people with the licking ice cream situation.’

Schools around the country closed over the last two weeks to aid authorities in combating the spread of the coronavirus.

While evidence from China, the country first hit by a major outbreak, suggested that younger people were not at risk from the virus as much as the elderly, the number of cases in the U.S. so far is suggesting that all young people may not be as safe from serious health complications as first believed. 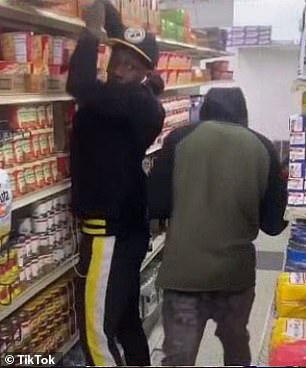 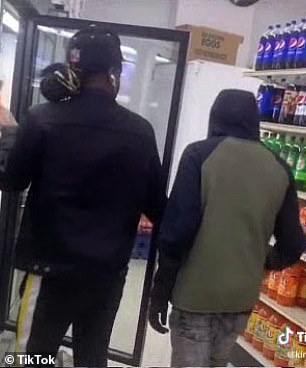 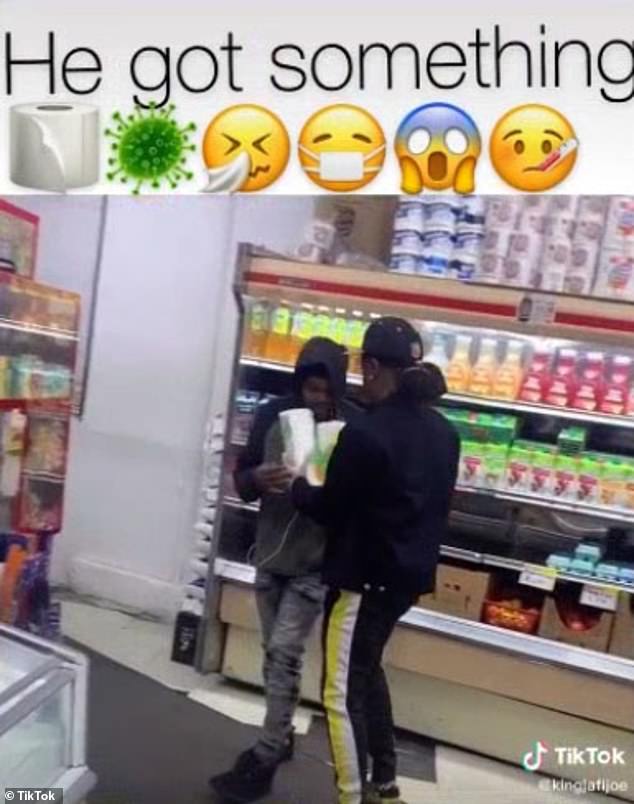 In this video posted to TikTok and posted under #coughingchallenge and #coronaviruschallenge, two people are shown shopping while one pretends to cough

Purcellville police but did not cite any other examples where teens had been seen coughing on grocery store produce for social media challenges but searches under #coronaviruschallenge, #coughingchallenge and #grocerystorechallenge did reveal similar videos.

In one video posted to TikTok, two people are seen inside a grocery store with one coughing and sneezing as he walks past the other shopping. He’s eventually handed some toilet paper to deal with the sneezes.

Another filmed in a Canadian store jokes at the reaction people have if a person starts to cough amid the current pandemic. 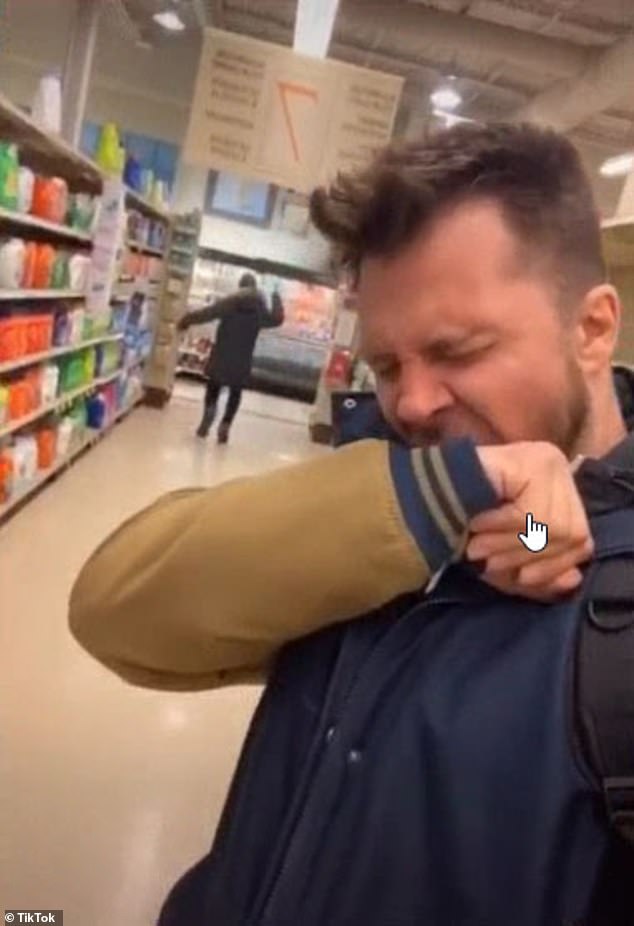 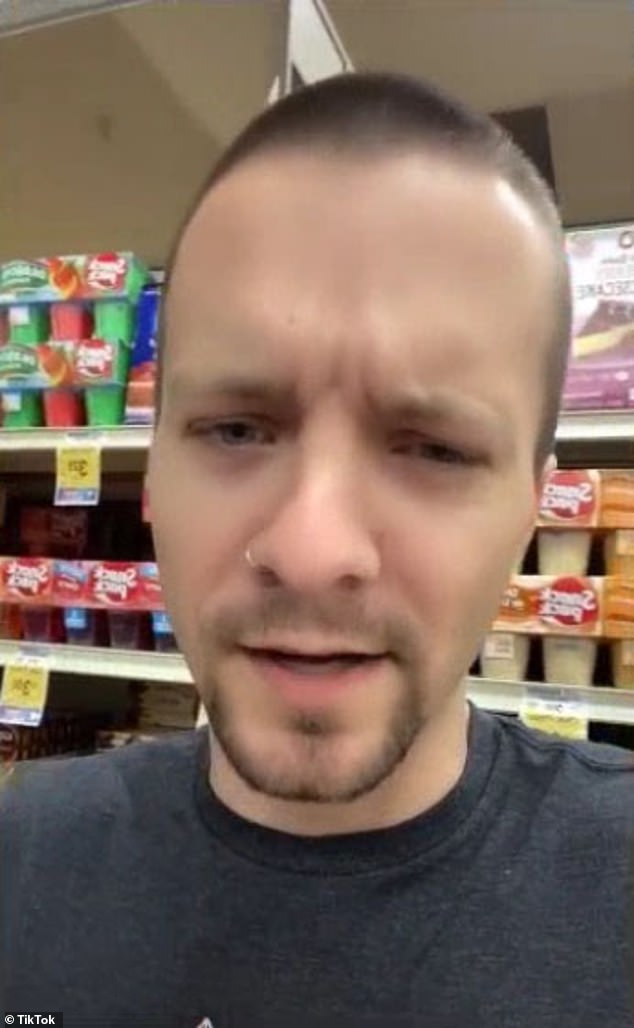 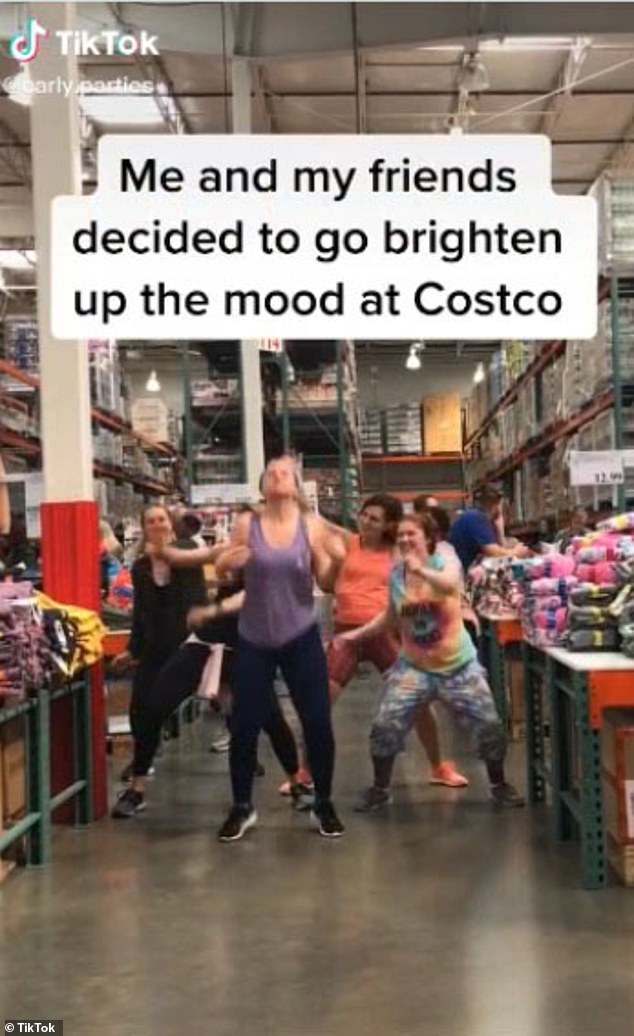 As one man pretends to cough, the other runs in the opposite direction down the aisle.

Many of those posted under the hashtags are of customers attempting to shop amid the panic with long lines and empty shelves making the normal chore more of a challenge than it used to be.

Others are performing dances within grocery stores to try and raise the spirits of those battling through the crowds to stock up.