Pandering police appeared to come to the aid of eco-zealots who caused chaos by blocking roads and digging tunnels near oil plants during a demo yesterday by feeding them water as they sat with their hands glued to the ground – amid mounting anger at Britain’s ‘woke’ forces.

Around 30 anarchists from XR-affiliated Just Stop Oil disrupted morning rush hour in Grays, Essex, with 10 staging a sit-down protest on a road next to the M25 while others occupied a nearby oil terminal and others blocked access roads to the Kingsbury oil terminal in Warwickshire.

Among those at the Grays protest was retired vicar Mark Coleman, 63, of Rochdale, Greater Manchester, who regularly takes part in climate change demos. He was fed water by at least one officer – even while the group’s antics caused travel hell for hundreds of motorists.

Though officers made more than 20 arrests, the scenes are likely to fuel fury at what critics have called the increasingly ‘light touch’ policing of many of Britain’s forces – which, it is claimed, take varying approaches to certain protests, and prefer to spend more time ‘policing tweets’ than clear up a rising tide of violent lawlessness in cities including London and Liverpool.

At the weekend, Lincolnshire Police officers have faced a backlash for joining in with a performance of the Macarena at a Pride festival – and appearing to boast about this by tweeting out video of the routine from the force’s official Twitter account.

Protest organiser Just Stop Oil said a total of nine people were also occupying tunnels, two in Grays and another two in Kingsbury.

One protester, who gave her name as Stephanie, posted a video online of herself in one of the tunnels, warning: ‘I’m really struggling to breathe, probably because I’ve got severe asthma, but we don’t really have much of a choice to be here if I want to save my two children’s futures.’

Among those taking part in the Grays protest, where some protesters had glued their hands to the ground, was Sam Holland, 20, a student from Leeds, who said: ‘Consenting to more fossil fuels is consenting to the collapse of our food systems.’

A police officer giving water to Just Stop Oil protester Mark Coleman, who had glued his hands to a road just off the M25 in Grays, Essex during rush hour yesterday 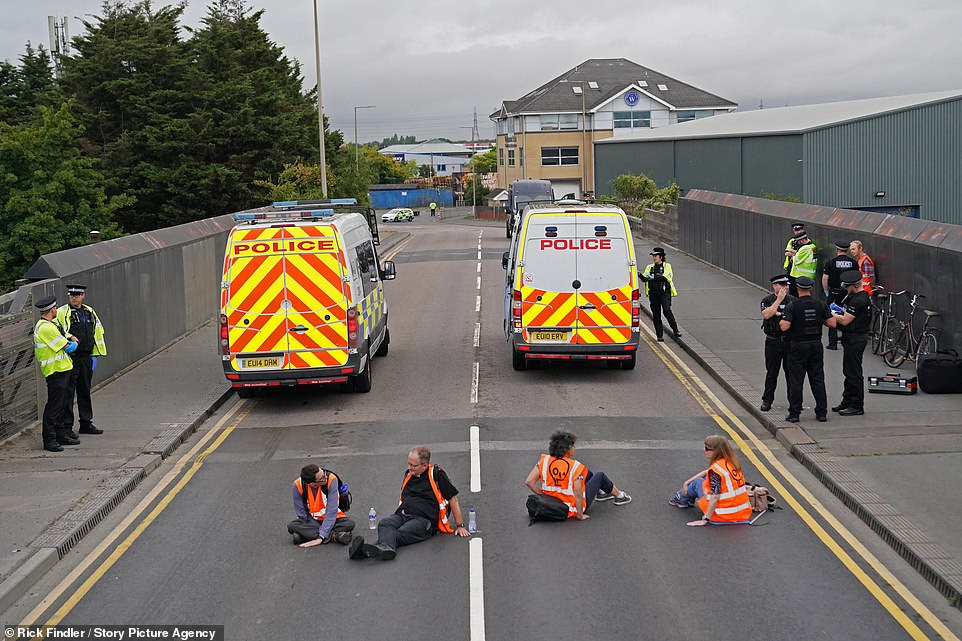 Police officers are pictured standing on the side of a road in Grays, Essex where eco-zealots were protesting 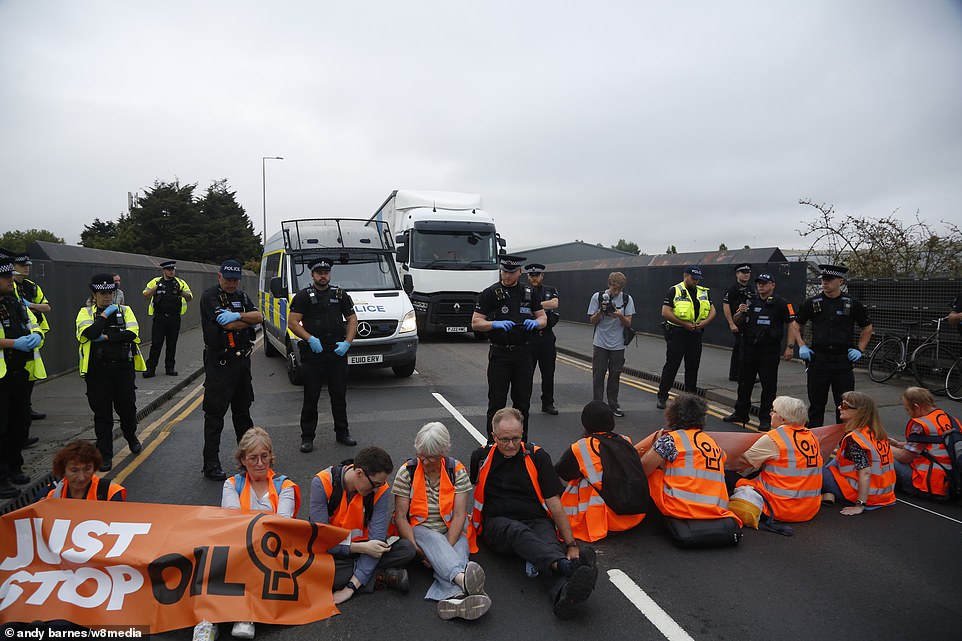 Officers stand behind the group of Just Stop Oil protesters sitting on a road in Grays, Essex during a demo yesterday 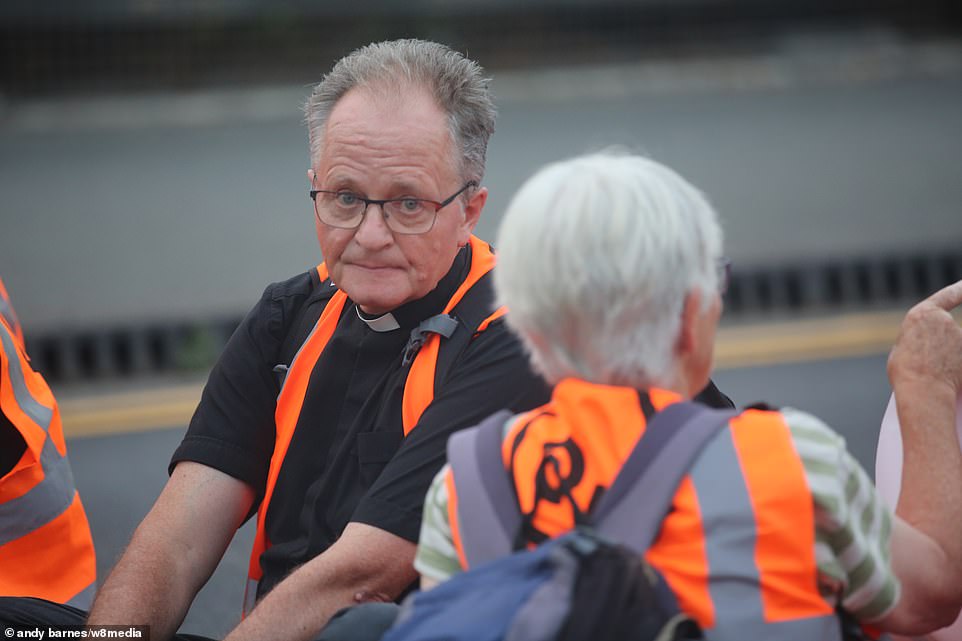 Among the protesters yesterday was retired vicar Mark Coleman, 63, of Rochdale, Greater Manchester – a regular protester 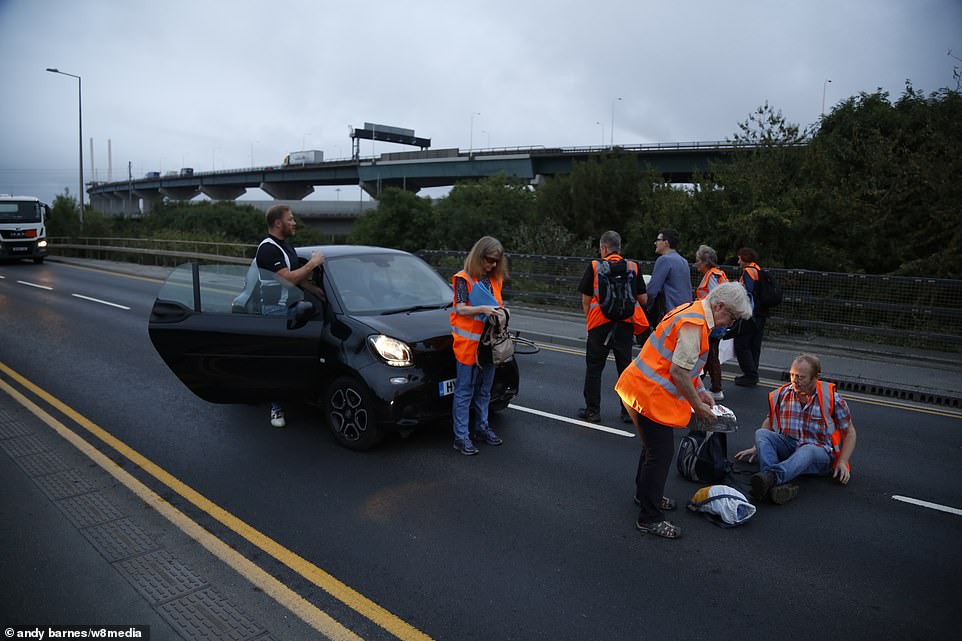 Motorists took matter into their own hands after a group of Just Stop Oil protests blocked a road in Grays, Essex 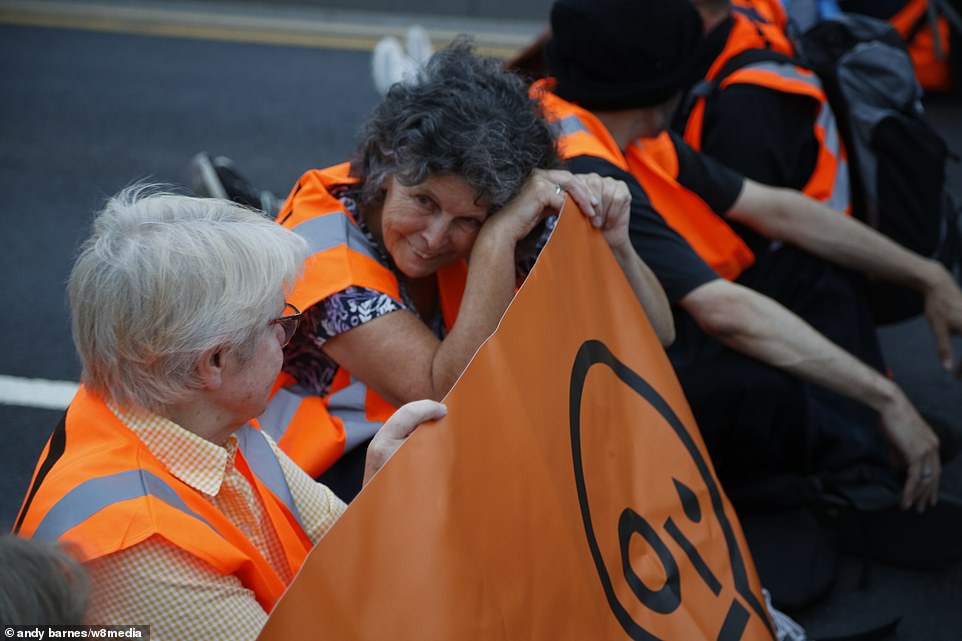 Chirpy protesters chat and laugh among themselves while causing travel hell for motorists in Grays, Essex

Lincolnshire Police officers have come under fire after footage posted to the ‘woke’ force’s social media account showed them dancing the Macarena at the city’s Pride festival.

Locals have reacted with fury after multiple posts were made showing on-duty officers having fun on the force’s social media accounts from the festival, including the video of officers dancing.

Residents have criticised the force’s coverage, asking why officers were spending time at the festival instead of fighting crime on the streets.

But Chief Constable Chris Haward has hit back at critics, saying officers were present to ensure everyone enjoys a ‘safe’ Pride.

He added he ‘expected’ his officers to engage with the community and ‘join in, even dance’ – as long as it did not distract from their duties.

A dispersal order had to be issued jut a couple of hours later after a number of large fights in the city.

Warwickshire protester Jeannie Donald-McKim, 58, a teacher from Witney, Oxfordshire, said: ‘People are getting desperate. We have run out of time for words. Now is the time for action.’

Just Stop Oil, a coalition of protest groups, tweeted: ‘In Warwickshire, police are refusing to close the road above the tunnel, endangering the life of those underground!’

The demonstrations came ahead of Just Stop Oil’s planned blockading of Parliament for weeks from October 1 over proposals to expand the extraction of oil and gas from the North Sea.

A Government spokesman said: ‘We will not bend to the will of activists who naively want to extinguish North Sea oil and gas production.

‘Doing so would put energy security and British jobs at risk and simply increase foreign imports, whilst not reducing demand.’ The transition from fossil fuels to renewable energy would take place ‘over the coming decades’, he added.

Catherine Rennie-Nash, 72, a retired teacher from Kendal, Cumbria, who was among those protesting in Essex, said: ‘I am beyond angry about the government’s plans to allow more oil and gas projects in the UK.

‘I have no choice but to be in civil resistance. We need to understand that the government isn’t protecting us. ‘The cost of living crisis is a choice, sky-high fuel bills is a choice, new oil and gas is a choice.

‘Government is allowing companies to steal our wealth and destroy our future, they are criminals.’

Jeannie Donald-McKim, 58, a teacher from Witney in Oxfordshire, who is joining the action near Kingsbury today, said: ‘Our addiction to oil is fuelling climate collapse and causing the worst cost of living crisis in 40 years.

‘People are getting desperate. We have run out of time for words. Now is the time for action. I urge everybody to step up and join us. This is the moment to come together and resist. We can do this.’

Meanwhile Anna Holland, 20, a student at Newcastle University who is also involved in the Kingsbury protest, said: ‘If you’re still debating whether to get involved in action against the government and the oil industry, ask yourself: do I want the rest of my life to look like this?

‘Do I want this year – with the cost of living crisis, climate breakdown, deadly weather – to be the best year of the 2020s? Because that’s the reality we face if we don’t take action and make change now.’

Just Stop Oil claims its protests from October will be more extensive than previous XR disruption and could result in Britain’s biggest ever campaign of civil disobedience.

The demonstrations are designed to challenge plans by the Government to allow energy giants, such as BP and Shell, to step up exploration and production of oil and gas in the North Sea.

Just Stop Oil is a coalition of groups trying to force the Government to end all new licences for the exploration, development and production of fossil fuels. 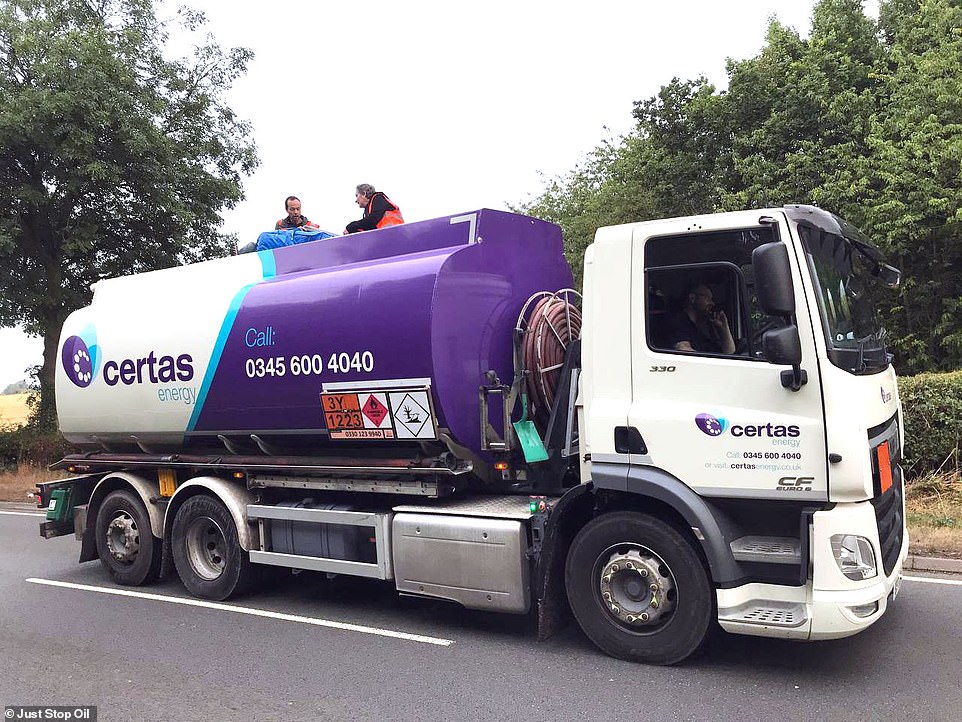 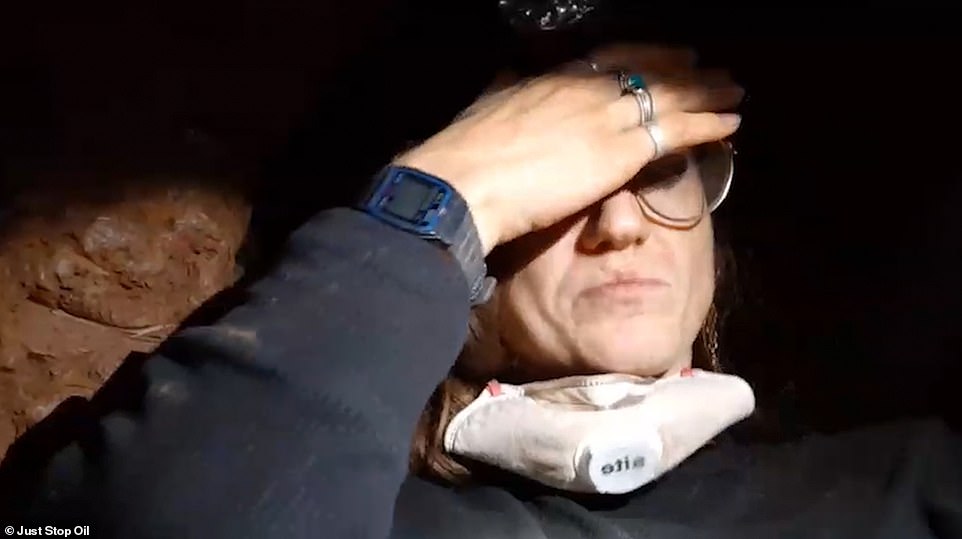 The protestor in the tunnel, called Stephanie, said it was ‘increasingly difficulty to be down here’ in the confined space

It has already held major protests on motorways and at refineries.

Its tactics are similar to those of Extinction Rebellion and Insulate Britain, whose members have caused chaos by gluing themselves to roads and vehicles.

It comes as energy bosses this week called for the £1,700 increase in annual bills to be scrapped – amid warnings that inflation will hit a staggering 18 per cent.

Industry leaders also called for bailouts as they claimed that if the price of beer had risen at the same rate as wholesale gas, a pint would cost £25.

Soaring inflation is being driven by the fact that household energy costs are set to rise from £15billion in a normal year to £75billion, said Octopus Energy.

And bosses have now claimed that the scale of the crisis is so enormous that it requires the sort of emergency response that was seen during the pandemic with a massive bailout for struggling families.

The thin blue line-dancers: From TikTok skits to partying at Pride and busting moves at the Commonwealth Games, the police who DANCE while on duty

Police officers faced a backlash over the weekend for joining in with a performance of the Macarena at a Pride festival, as critics accused them of not taking their job seriously enough.

Locals reacted with fury after multiple posts were made showing on-duty officers having fun on Lincolnshire Police’s social media accounts from the festival, including the video of officers dancing.

Their concerns were reinforced by Susan Hall, chair of the Police and Crime Committee at the Greater London Authority, who told MailOnline: ‘We should not have uniformed police doing the Macarena when they should be doing their jobs.’

But it was by no means the first instance of uniformed officers on duty getting involved with the festivities at major events.

In May, five officers were branded a ‘disgrace’ for performing a TikTok-style dance in a north London suburb with a high crime rate. 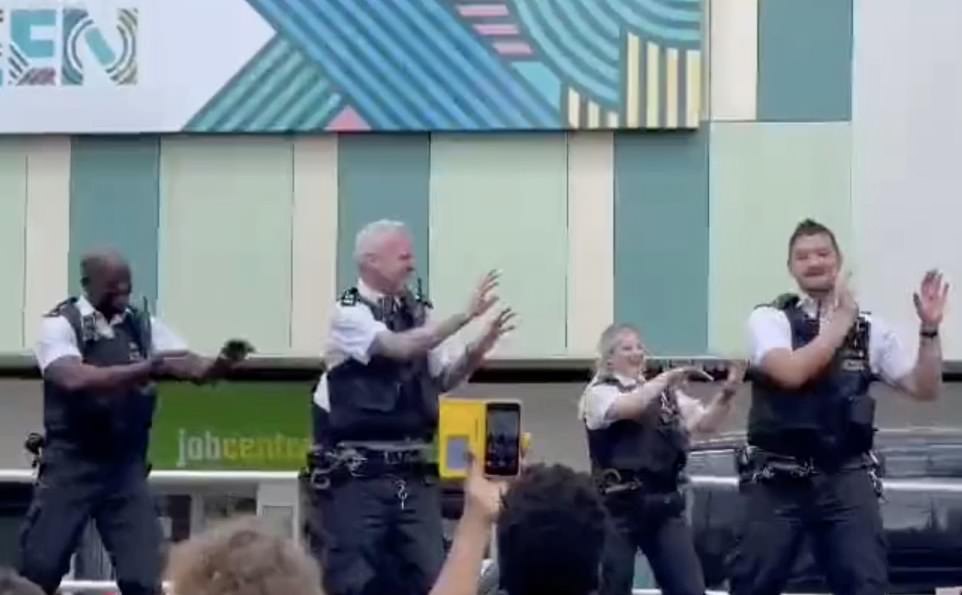 Footage from a ‘youth engagement’ community event in Edmonton showed the four PCs and a sergeant busting moves to Run-DMC’s 1983 hip hop song It’s Like That.

Their routine, which lasted about a minute on stage and included synchronised moves, was met with some applause – but others were less impressed.

Mick Neville, a retired senior Scotland Yard detective, told The Sun: ‘It’s a total disgrace. People don’t want to see police dancing in the street. Edmonton is a high crime area. These officers should be on patrol, not dad dancing.’

A month earlier, student officer Gorvinder Chima was filmed showing off his moves alongside the women dancers at a stall outside the stadium in Perry Barr, Birmingham. 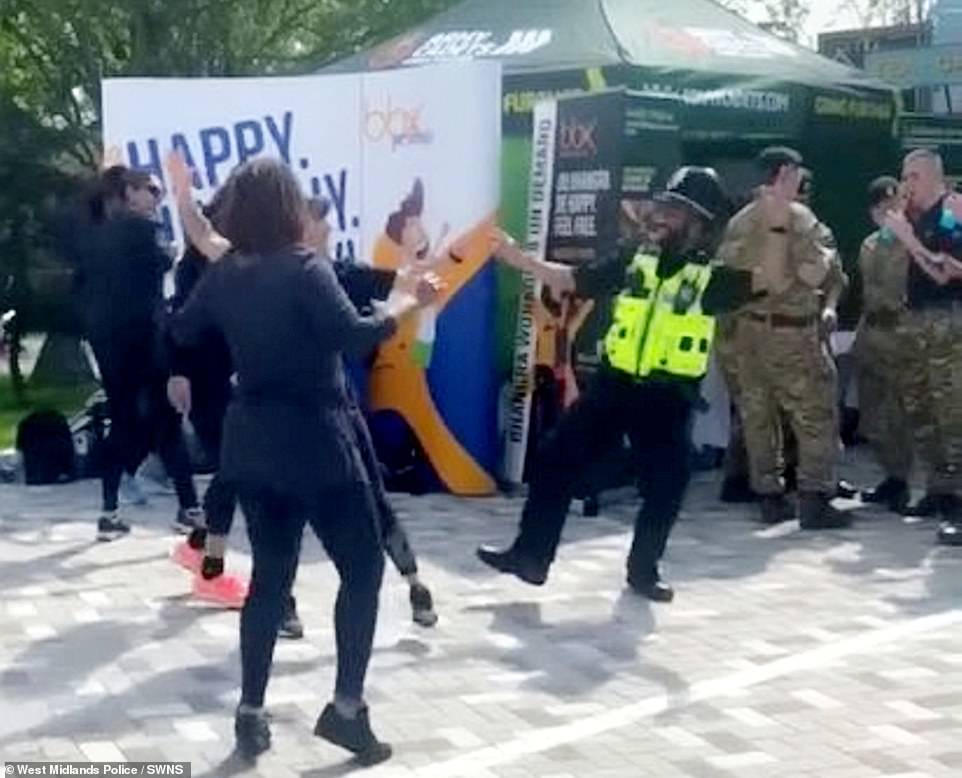 Student officer Gorvinder Chima is seen showing off his moves alongside a group of female dancers at a stall outside the stadium in Perry Barr, Birmingham 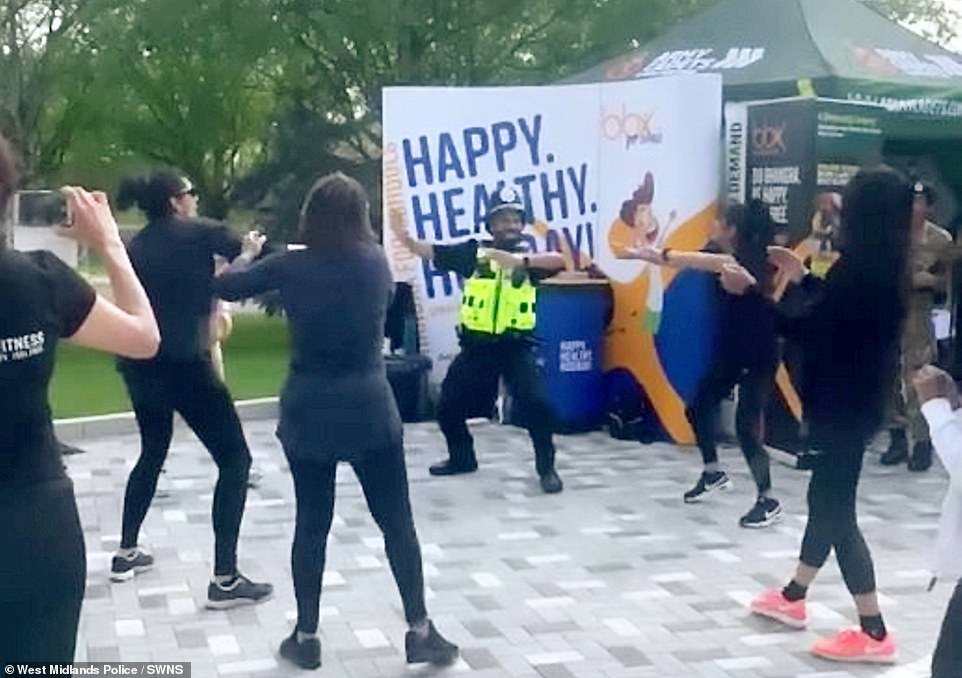 All the moves: The Hertfordshire police officer is seen breaking into a dance routine to the Steps smash hit ‘Scared Of The Dark’ during the Brighton Pride festival in 2017

Meanwhile in 2019, a lip-syncing policeman, wearing rainbow epaulettes and a Hawaiian garland of flowers, performed moves from the music video to the Steps’ hit Scared Of The Dark at Brighton Pride.

And back in 2017, PC Daniel Graham made headlines for entertaining carnival-goers at the Notting Hill festival with his moves while on duty.

The dancing policeman was even told ‘you must be an undercover raver’ while manning barriers at the carnival.

But in the subsequent years, officers have faced a dance ban so they are not distracted and can ‘keep a better eye on what’s going on’ around them.