Bodycam footage has captured the moment a cop was told to ‘keep his mouth shut’ after gunning down an unarmed Australian woman in Minneapolis.

Justine Ruszczyk Damond was fatally shot outside the home she shared with her American fiancé, Don, and his son in July 2017, after she called 911 earlier that evening to report a possible rape.

In the alarming clip Mohamed Noor, the officer who shot Ms Damond as she approached the police car, appears sweat-soaked and visibly anxious while a fellow officer is heard telling him to ‘keep his mouth shut’.

The bodycam footage, which was tendered to the court and released on Thursday, sees Noor pace in distress while another cop offers him some advice.

‘You alright? Yeah. Just keep to yourself, keep your mouth shut,’ an unidentified officer tells Noor in the clip.

An inaudible sound is heard before the voice continues.

‘Have to say anything to anybody. Alright,’ they say.

They then tell Noor to ‘hop in’ the vehicle and ‘sit with Ringer’ before stating they were ‘goin’ off’.

Appearing to be overwhelmed, Noor nods and says ‘alright’ before climbing into the squad car to sit with another officer.

In another clip, Harrity tells officers he had his gun drawn, but did not fire, whereas Noor did.

Ms Damond, a dual US-Australian citizen was to due be married to her fiancé, Don (pictured) a month after her life was cut short when she was fatally shot outside her home in Minneapolis by police officer Mohamed Noor 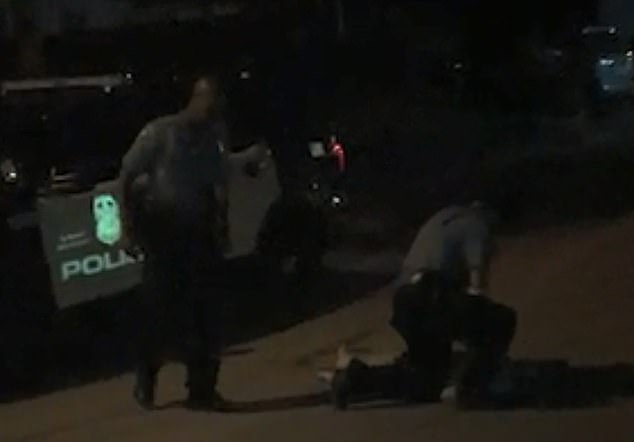 Ms Damond had called police to her home on July 15, 2017, believing a woman might be getting raped outside her home. She was shot after she approached the squad car, ‘spooking’ the officers inside (pictured is Noor’s partner Matthew Harrity performing CPR on Ms Damond after the shooting as Noor paces nearby) 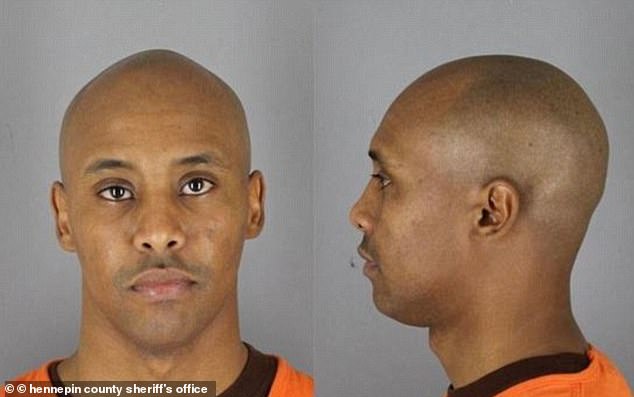 ‘We got spooked,’ he told them.

In the clip taken by the cyclist, officers can be heard urging Ms Damond to ‘stay with me’ as they pump her chest.

A jury found Noor was guilty of third degree murder and second-degree manslaughter after a three-week trial in Minneapolis last month. 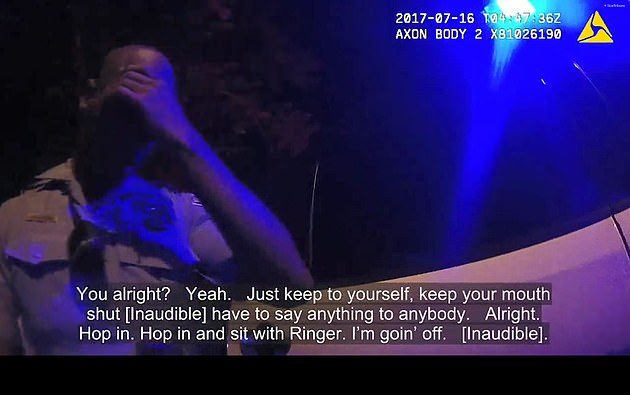 Bodycam vision released on Thursday shows Noor moments after the shooting, looking sweaty with his head in his hands

The officer is appealing the charge, with his lawyers claiming Noor did not act with a ‘depraved heart’ and was instead trying to ‘defend his partner and himself’.

‘The evidence at trial failed to support finding that Mr Noor acted with a depraved heart,’ Noor’s lawyers wrote in the filing.

‘When Officer Noor fired that night he was not acting with depraved mind seething with wanton passion to cause mischief.’

‘Mr Noor reacted to a dark alley in the middle of the night, a thump on the squad, a voice, a body appearing at the driver’s side window, the startled announcement of fear by Officer Harrity as he reached for his firearm, and his observation that the person in the window was raising their right arm,’ the lawyers wrote.

‘Mr Noor’s actions to defend his partner and himself, in the context of that night, are not evidence of the depraved mind envisioned by Minnesota courts for the last hundred years.’

Ms Damond, 40, formerly of Sydney’s northern beaches, was home alone in Minneapolis just before midnight on July 15, 2017, when she heard a woman’s screams.

She called 911 and when Noor’s police squad car arrived in the alley at the rear of her home she approached the vehicle.

Noor and Harrity testified that Ms Damond startled them, they feared an ambush and Noor said he made the split-second decision to shoot across his partner and out the car window at Ms Damond.

Noor, 33, a Somali immigrant who had only been an officer for 21 months before the shooting, faces a 12-and-a-half-year prison term when sentenced on June 7.

Ms Damond’s family filed a civil lawsuit against the city of Minneapolis and received a record $US20 million ($A29 million) settlement.

Noor, who was sacked from the police force after being charged last year, is in custody ahead of his sentencing. 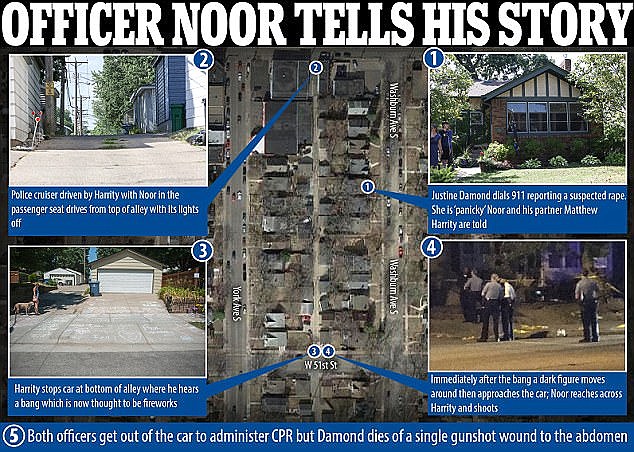