Polish man attacks a bear and tries to DROWN it after drunkenly climbing into its zoo enclosure, before both of them are left with minor injuries from brawl

A drunk man who tried drowning an elderly bear after breaking into her zoo enclosure is facing prosecution after the attack left her ‘distressed’ and ‘nervous’.

The 23-year-old was caught on phone camera goading Sabina at a Warsaw zoo in Poland after it had lifted its coronavirus lockdown.

Video footage shows Sabina skulking towards the seemingly oblivious man after he had broken into the enclosure.

He suddenly notices her and, panicking, jumps into the water beneath them.

Sabina prowls around the floundering drunk from above before lumbering into the water after him.

At this point the man grapples with the bear and can be seen trying to drown her as he forces her head under water, while shocked visitors watch on.

The brown bear can be seen approaching the drunk man, who looks nervously toward her 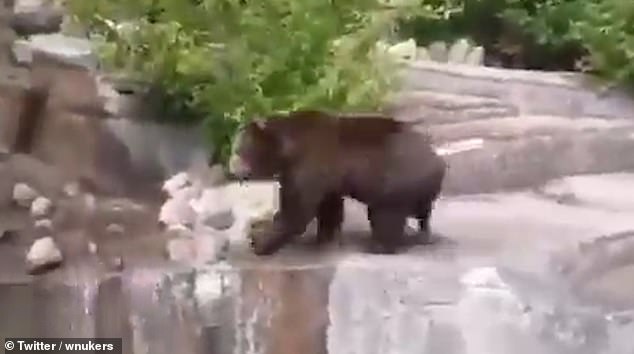 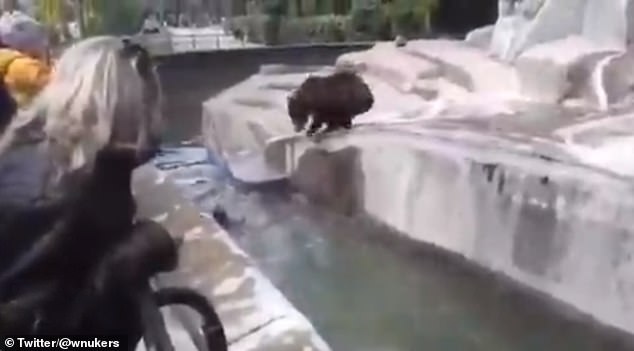 Video footage shows Sabina lumbering into the water after him 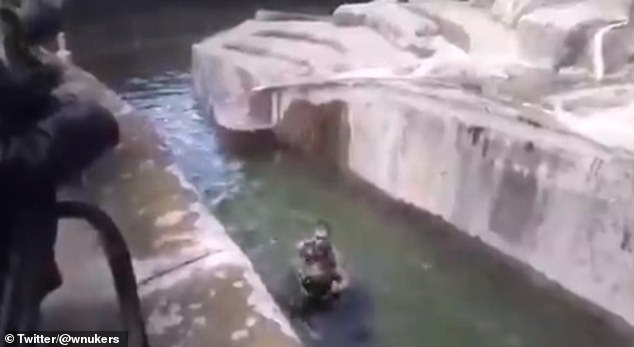 The man eventually managed to escape with minor cuts and was taken to hospital.

Zoo spokesman Karczewska said: ‘Sabina, an old bear who was attacked by an adult man, physically came out of this event unscathed, but she is very stressed.

‘She used to belong to a circus and is accustomed to the presence of people, but she absolutely did not expect a human attack.

‘After the event, she sat in the water growling nervously until her carers came to look after her.’

She said that the man was lucky only Sabina was in the enclosure who, ‘Although in good shape for her age, is not such an efficient bear.’

‘The man would have much less chance of surviving this event without serious injury’ if she had been a better attacker.

The zoo said it plans to prosecute the drunk and ‘will take all legal steps related to this event to bring the perpetrator to justice’, a statement said.

‘The animal was exposed to danger and her psychological comfort was disturbed.’

This isn’t the first time Sabina has been been attacked by a human.

A 32-year-old climbed into the enclosure in 2015 and punched her in the head after the bear tried to bite him in an effort to protect herself.

The man escaped and was later found in hospital with cuts to his hands where he was fined £170. 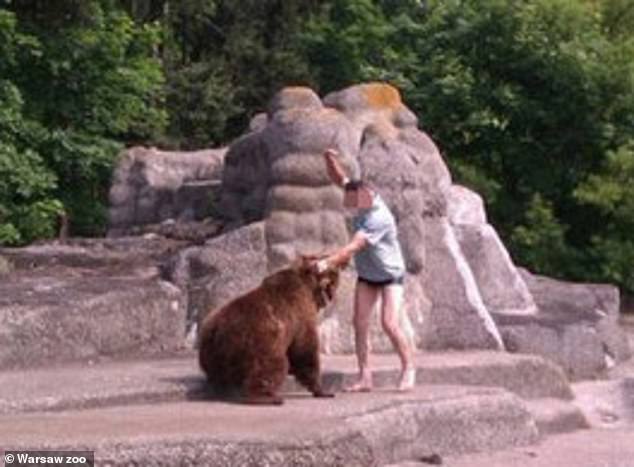