A South Dakota representative compared medical procedures for transgender youths to Nazi experiments in concentration camps, but has since called the remark ‘pretty stupid’ after intense backlash.

Rep. Fred Deutsch made the controversial comparison during an interview with Tony Perkins of Family Research Council, a conservative activist group, on January 22.

Deutsch said: ‘To me, that’s a crime against humanity when these procedures are done by these so-called doctors…that dance on the edge of medicine…’

‘You know, I’m the son of a Holocaust survivor. I’ve had family members killed in Auschwitz. And I’ve seen the pictures of the bizarre medical experiments.’

Before that, Deutsch said he’s blown away by photos transgender children share of themselves on the internet with ‘terrible’ scars.

Deutsch, a Republican in the South Dakota House of Representatives, created House Bill 1057.

If fully approved, it would effectively prohibit hormone treatment, puberty blockers and gender confirmation surgery for children under 16-year-old.

Those treatments would be considered a Class 1 misdemeanor for doctors, which could result in one year of jail time and a maximum fine of $2,000.

However, the bill will allow doctors to perform surgeries on babies who are intersex, a term used to describe people with ‘reproductive or sexual anatomy that doesn’t seem to fit the typical definitions of female or male.’

Deutsch began drafting the bill after meeting people on social media who underwent hormone treatment or surgery, but later regretted it.

The South Dakota House passed the bill on a 46-23 vote on Wednesday afternoon.

Previously, Deutsch sponsored the nation’s first ‘bathroom bill’ in 2016, which would have banned transgender students from using their preferred bathroom at public schools.

Since his comments, Deutsch has backtracked on his statement and apologized for his ‘regrettable’ words.

‘I regret making the comparison. I regret saying anything at all. It was pretty stupid,’ Deutsch told The Washington Post. 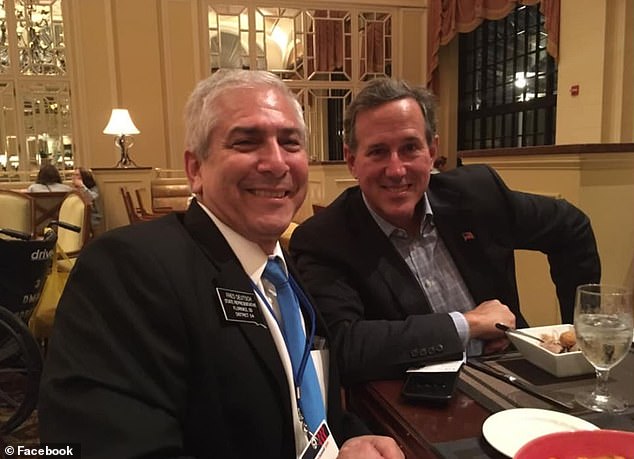 Deutsch, sitting with former U.S. Senator Rick Santorum (right) said he drafted HB 1057 after speaking with people who had undergone hormone treatment or surgery, but later regretted it

However, he doubled down on his comments about photos of transgender children’s sex-reassignment surgeries.

During the Holocaust, Nazi doctors and scientists forced Jewish people in concentration camps to suffer horrific medical experiments that often killed or permanently disabled them.

Similarly, activists have slammed Deutsch’s HB 1057 Bill and the Human Right Campaign have condemned the approval.

Alphonso David, the president of the Human Rights Campaign, also spoke out against HB 1057 and said it is a ‘devastating’ message to transgender minors

Studies show that hormone treatment, which is used to delay puberty, is reversible and evidence suggests that allowing children to undergo this process until their 16 can lower the risk of mental illness.

In South Dakota, less than four physicians offer hormone treatments to patients, none of who Deutsch has met.

The Trevor Project, an LGBTQ suicide prevention group, released a 2019 survey that found more than half of transgender and non-binary minors have seriously considered suicide in the last 12 months.

Afterwards, the bill would transfer to South Dakota Gov. Kristi Noem who has not revealed if she supports it.