They were truly offal scenes.

Two Coalition politicians had to be pulled apart from a gutsy battle on the floor of NSW Parliament over a cheap jibe about chopped liver.

The offcut omission sparked a visceral reaction from Mr Fang, who demanded: ‘What am I? Am I chopped liver, mate?’

Government Whip Mallard, 57,  charged over to Mr Fang to deliver his own galling response before returning to his chair.

The allegedly jaundiced comments were not picked up by Hansard, the official record of Parliamentary proceedings.

But witnesses to the innards workings of Parliament told the Daily Telegraph that Mr Fang, 44, was left shellshocked for several minutes by the remarks.

Rather than let the foie gras faux pas lie though, he was then seen pacing back over to Mr Mallard’s chair to confront him with more hepatic feedback.

It took the intervention of Women’s Minister Bronnie Taylor physically stepping in between the pair to bring an end to the bilious rage.

Although there was no official account of the cirrhotic clash, One Nation NSW Upper House MP Mark Latham made sure the tripe was reported on Twitter. 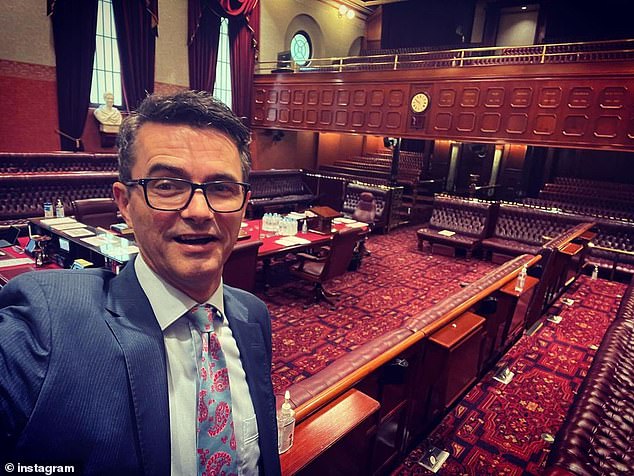 Government Whip Shayne Mallard, 57, (pictured) charged over to Mr Fang to deliver his own galling response before returning to his seat

‘Heading in to NSW upper house today, looking forward to Mallard v Fang, Round 2,’ he posted.

‘I’m not used to these rough-house parliamentary brawlers, and had expected the LC to be quite genteel.

‘My money’s on Fire-Up Fang, who looks to have a reach advantage over The (Mallard) Duck.’

Shooters, Fishers and Farmers Party MP Mark Banasiak piped in with a gif of WWE wrestlers slapping each other and posted: ‘Bit of excitement in the house last night. 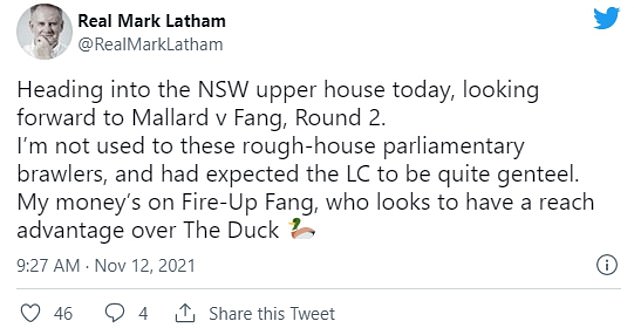 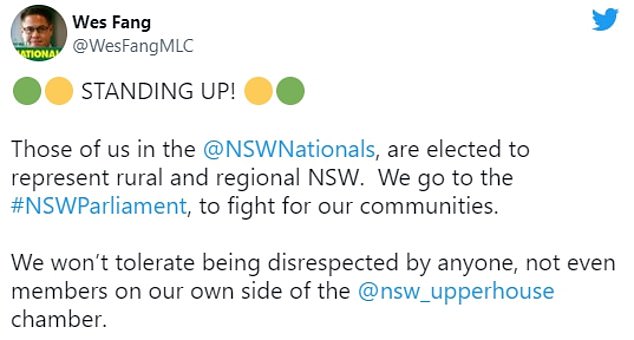 ‘[Fang and Mallard] squaring up to each other off camera. Had to be dragged outside the chamber. Dramatic re-enactment below.’

Mr Fang joined in the kidneying around and tweeted back :’Come on… Mallard still has his teeth this morning. Clearly, I wasn’t trying…

‘To be fair, there was no Round 1… if there was, I assure you there would be no need for a Round 2!’

He later added: ‘We won’t tolerate being disrespected by anyone, not even members on our own side of the chamber.’

Mr Mallard decided to show intestinal fortitude and chose not to get involved with the Twitter row.

Daily Mail Australia – the vital organ of news – has contacted him for comment.