Poll: Almost two thirds of Brits would feel uncomfortable going to the pub after lockdown

Coronaphobia is STILL gripping cautious Britain: Almost two thirds of us would feel uncomfortable going to pub or  foreign holiday at end of lockdown – and fewer than HALF want to return to work

Almost two thirds of Britons would feel uncomfortable going to the pub or taking a foreign holiday when lockdown ends, according to a new survey which suggests ‘coronaphobia’ is still gripping the UK.

Some 60 per cent of the nation would feel uncomfortable going to a bar or restaurant with the same number saying the same about taking a holiday abroad.

Meanwhile, less than half of people say they would feel comfortable returning to their place of work and 65 per cent would feel uncomfortable attending a large public gathering.

The latest poll numbers published by Ipsos Mori suggest Boris Johnson is facing an uphill battle to get Britain back to normal.

The polling company said that even though the Prime Minister has set out his road map for exiting lockdown ‘public mood does not seem to have shifted very significantly’ and there are ‘still many anxieties that need to be overcome’. 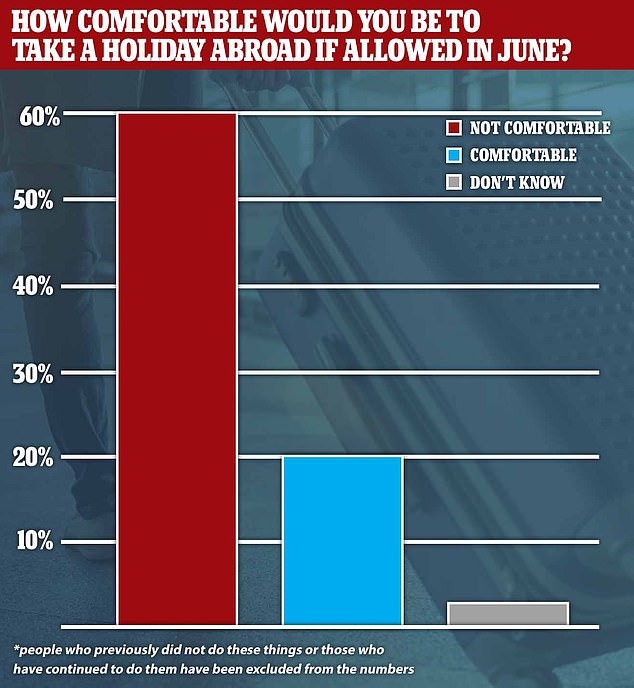 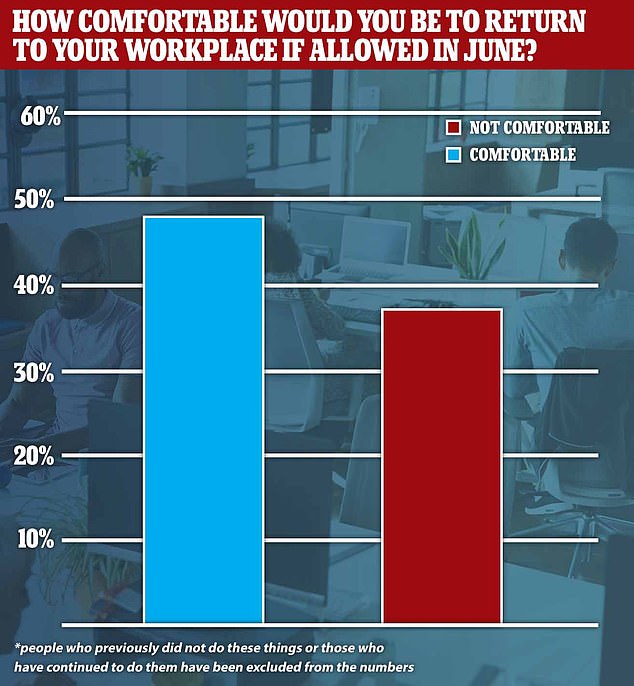 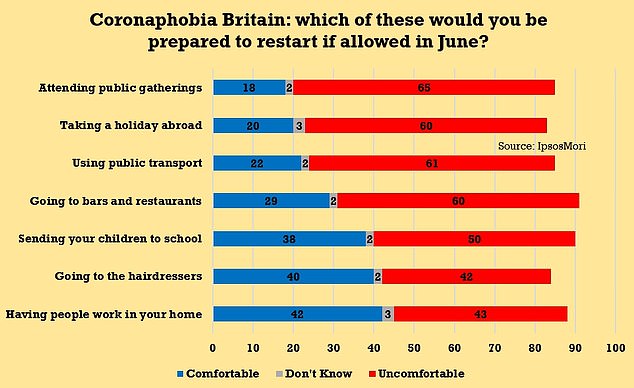 Respondents to the survey were told to imagine that lockdown ended entirely within the next month.

They were then asked how comfortable, if at all, they would feel doing things in the same way that they used to do them before the outbreak.

The findings showed that six in 10 people would be not very comfortable or not at all comfortable going to a bar or restaurant.

Approximately three in 10 (29 per cent) said they would feel very comfortable or fairly comfortable.

On travelling abroad for a holiday, just 20 per cent said they would feel very or fairly comfortable compared to 60 per cent who said not very comfortable or not at all comfortable.

Gideon Skinner, head of political research at Ipsos MORI, said: ‘Despite the summer holidays looming, only two in ten people say they would be comfortable holidaying abroad if lockdown was lifted in the coming month.

‘Our findings hold out more hope for those running tourism businesses in the UK, but there are clearly still many people who will need to be reassured.

‘Overall, the public mood does not seem to have shifted very significantly – whilst people are looking forward to seeing friends and family again, there are still many anxieties that need to be overcome before life will begin to return to normal.’

The reason the numbers do not add up to 100 is because people who either did not previously do these activities or who have not stopped have been excluded.

Aside from the holidays, pubs and public gatherings issues, the polling suggests Mr Johnson faces a more pressing problem.

The Government is actively encouraging people who cannot work from home to now return to work.

But the survey showed that only 47 per cent of people feel very or fairly comfortable going back. 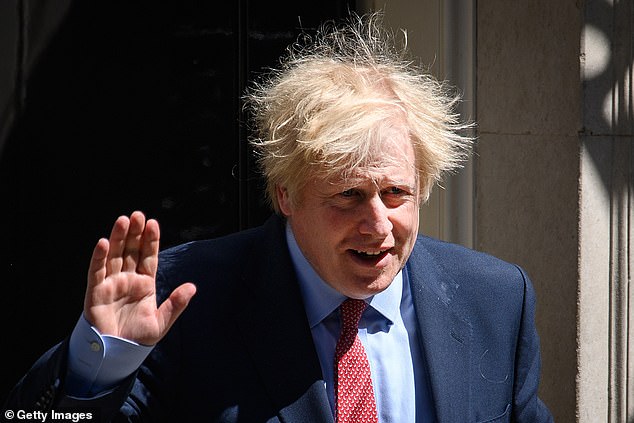 The latest polling suggests Boris Johnson, pictured in Downing Street today, faces an uphill battle to persuade the nation that life can return to normal 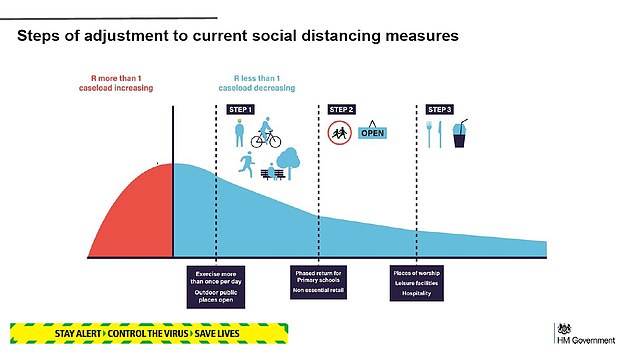 Mr Johnson’s coronavirus lockdown exit strategy is comprised of three stages, with each one only allowed to proceed when the rate of transmission has fallen

Almost four in ten (38 per cent) said they would feel not very comfortable or not at all comfortable at the prospect.

There also appears to be considerable disquiet about the Government’s plans for the reopening of primary schools with 50 per cent of people saying they would not be comfortable with their children returning to classrooms.

When Mr Johnson set out his lockdown exit strategy he said it would be comprised of three stages.

The first one, which has now been enacted, allows people to exercise as much as they want and to meet one other person from outside of their household outdoors as long as they socially distance.

The second stage, potentially starting from June 1, would see the phased reopening of primary schools and some non-essential shops.

Stage three could then begin in July with places of worship and leisure and hospitality venues reopening.