There was a glimmer of light for Theresa May today amid signs voters think Jeremy Corbyn and her Tory rivals would be making a worse job of Brexit.

The Prime Minister is battling to push her deal with the EU through in the face of huge resistance from her own party and the Opposition.

As she fights off a concerted attempt to oust her by Conservative Eurosceptics, research for Lord Ashcroft has suggested replacing her with Boris Johnson or Jacob Rees-Mogg would not go down well with the public,

She also still rates well ahead of the Labour leader.

In further hope for the PM, people view her Brexit package as better than a no-deal outcome.

But worryingly it is also seen as less attractive than the current EU membership terms.

According to the survey, just under half of voters claimed to know at least a ‘but’ about the Brexit package thrashed out with Brussels.

Some one in five said they thought the Brexit deal honoured the referendum result, with the figure falling to just 13 per cent among Leave voters.

Overall 34 per cent of people thought the deal was better than going with no agreement – outweighing the 27 per cent who said the opposite.

Asked how they believed the deal compared to existing membership terms, 21 per cent said it was better, and 42 per cent worse.

On the question of who would make the best PM, Mr Corbyn was preferred to Mrs May by 28 per cent – but 45 per cent said he would be worse.

Some 22 per cent said Mr Cameron back in No10 would be an improvement, but they were contradicted by 43 per cent.

Mr Johnson – seen as Mrs May’s biggest rival – was regarded as worse by 53 per cent, and better by just 19 per cent.

Mr Rees-Mogg’s ratings were similarly dismal, with just 14 per cent saying he would be an improvement, and 42 per cent a downgrade.

None of the other potential replacements – including David Davis, Sajid Javid and Dominic Raab – recorded a net positive result when compared to Mrs May. 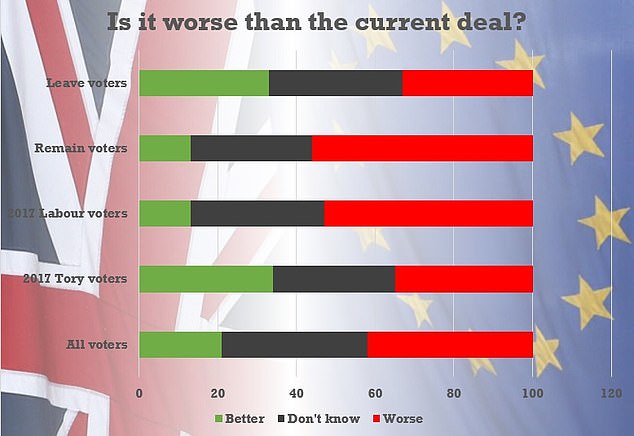