Polyamorous trio insist their relationship is nothing unusual

A polyamorous trio who are engaged to each other – and all share the same king size bed – insist that there’s nothing unusual about their relationship.

From enjoying romantic dinners out to curling up in front of the TV at their home in Tennessee, Nic Chandler, 27, Rachel Kouris, 26, and Xander Kelley, 20, say there’s no jealousy involved despite their unconventional situation.

Nic, who was born male and initially lived as a transgender woman, but now identifies as gender neutral and prefers the pronouns ‘they’ and ‘them,’ has always been mainly polyamorous – first dating multiple people during high school.

Then, around a year ago, the TV station worker met delivery driver Rachel, who is a transgender female, through OKCupid, a dating site.

Initially, the pair dated monogamously – or as a ‘closed couple.’ Then Nic met Xander, a transgender male, through work, and the trio now live together and share a king size bed.

Xander Kelley, 20, Nic Chandler, 27, and Rachel Kouris, 26, have formed a polyamorous romance and insist their trio is not much different from any other relationship 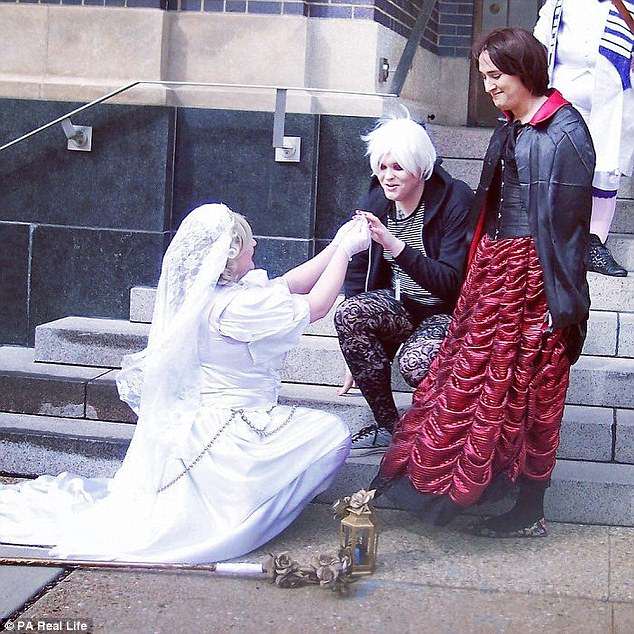 ‘We bonded over having similar interests and both being trans. We hung out more and more and he just blended in seamlessly,’ said Nic.

‘My big worry would be how he’d get on with Rachel, but they clicked right away.

‘I have been in polyamorous relationships before, where the other two preferred each other, which was the first time I think I had reservations about them. But this hasn’t been an issue with us. Xander fits in perfectly.

‘We’re all different and all get something different from each other. We’re a unit.’ 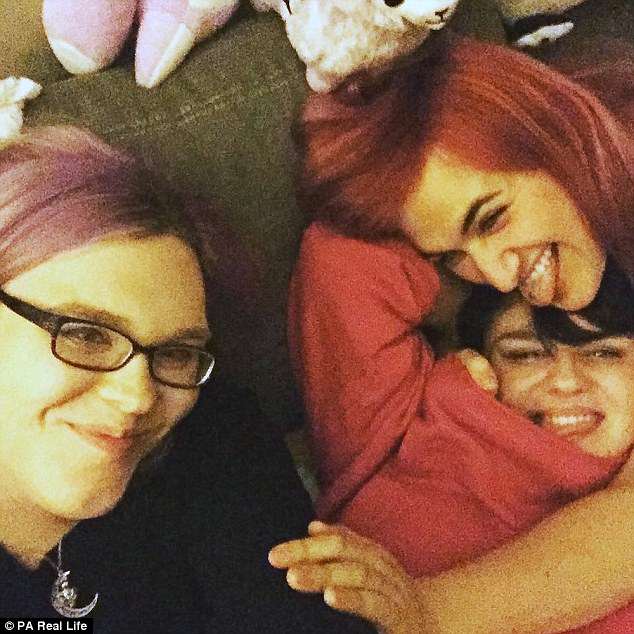 Nic (left), Rachel (back) and Xander relaxing together at home where they argue over what to eat for dinner and watch on Netflix 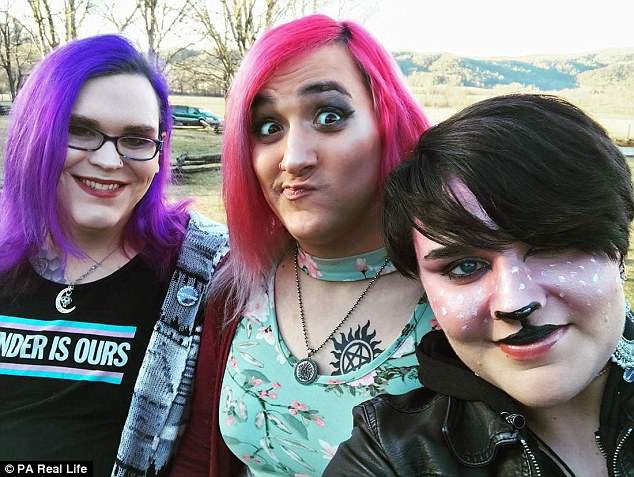 Around six months ago, the trio entered into an official relationship and now all live together.

Despite making their romance official in March 2018, when Xander, who works in retail, proposed at a cosplay dressing up event in Michigan it is acceptable for them all to have other lovers.

Nic, of Tennessee said: ‘I’ve had monogamous relationships in the past, but felt they were too closed off.

‘I have a lot of love to give in different ways and, equally, didn’t feel I could get everything I needed from one person.

‘The biggest misconception, I find, is that people think being polyamorous – which means you are in a relationship involving more than one person – is all about sex. They underestimate the seriousness of it, but I love these two people very much. 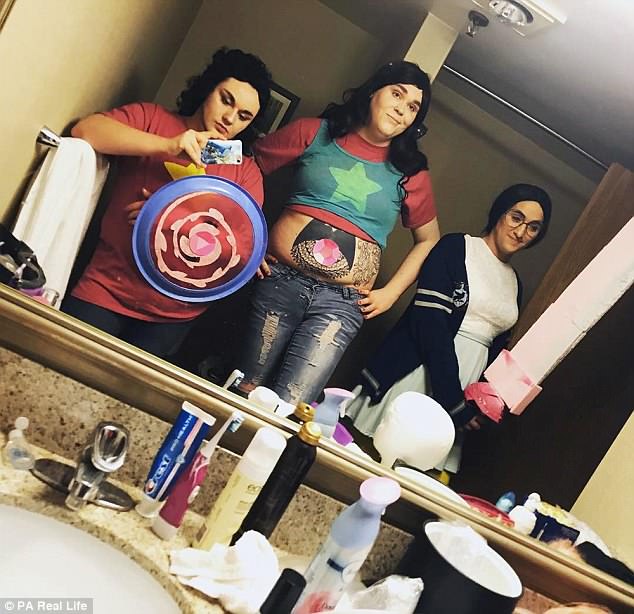 Xander, Nic and Rachel in cosplay costumes. The trio said the biggest misconception over their relationship is that it’s all about sex The king size bed the trio share at their Tennessee home. They are open to having relationships outside the trio, but only Nic is doing so at the moment

‘We have a normal relationship. We’ll argue over Netflix or what to have for dinner just like anybody else – the only difference is there’s one extra person to do it with.’

They try to do as much as possible together, and say that jealousy is not a factor if two people do something without the other one.

‘I think being polyamorous is something in your hard wiring. You can’t force it,’ said Nic.

‘Because we all share similar views, jealously doesn’t tend to be an issue. We mostly do things together, but sometimes, due to schedules, or if it’s something one of us isn’t bothered about attending, two people will go off separately.

‘Of course, there are always things we have to work through, but that’s just relationships.’ 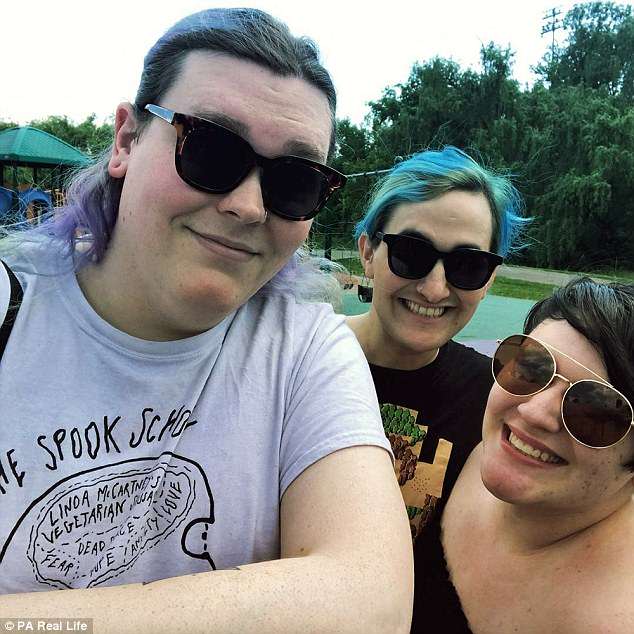 Nic, Rachel and Xander enjoying a day out together. They say that communication is the key to maintaining a healthy relationship

They are also open to having relationships outside the trio – something only Nic is doing at the moment.

And, when it comes to additional partners, they feel honesty is the best policy.

Nic continued: ‘We always make sure we’re open about what’s going on. As long as we’re honest, run everything by the other two and keep everyone in the loop, it’s fine.

‘The other two also have veto abilities, which they haven’t used yet, but sometimes we all have down days and might not necessarily want to see our partner going off with someone else. 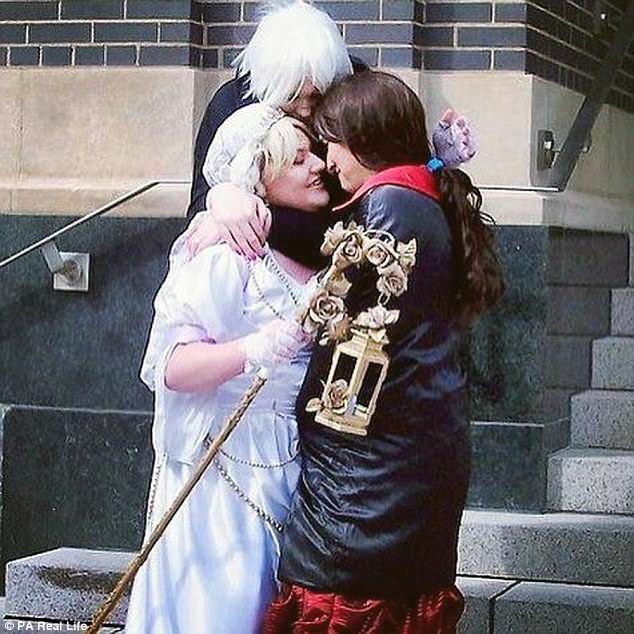 ‘Communication is absolutely key to make sure we maintain that balance.’

At home, the trio all share the same bed, with their spare bedroom acting as a storage room for all their cosplay outfits – a hobby in which participants dress up as their favourite comic book or fantasy characters.

Nic added: ‘We sleep in the same king size bed. Early on, we had to adjust, but now sex isn’t an issue.’

In March 2018, the trio took things to the next level and got engaged at a cosplay event. 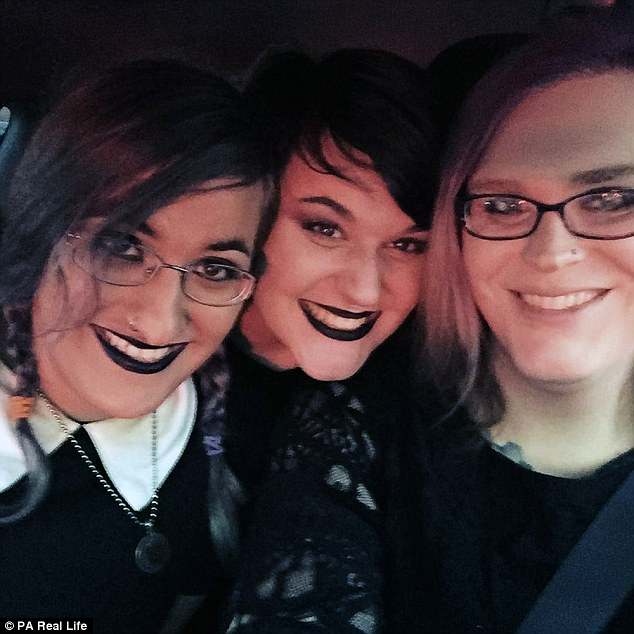 While the trio cannot marry legally, they hope to have a special ceremony on Halloween next year 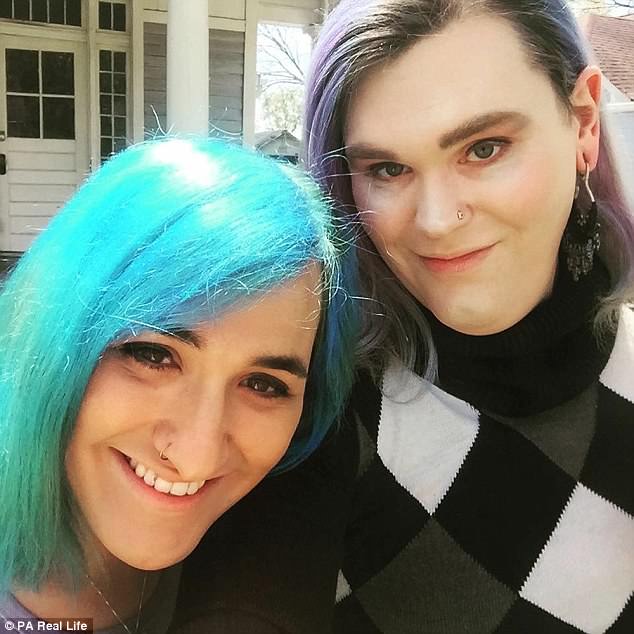 Rachel and Nic on their one year anniversary. Initially, the pair dated monogamously before meeting Xander

While they cannot marry legally, they hope to have a special ceremony on Halloween next year.

‘Xander had spoken about marriage before and we all agreed it was something we wanted,’ said Nic.

‘Then he proposed at a cosplay event. I’d had my suspicions but was still really shocked.

‘He organised a photoshoot that purposefully involved all three of us and we were all posing when he suddenly got down on one knee.

‘All three of us wear rings and Rachel has one on each hand. 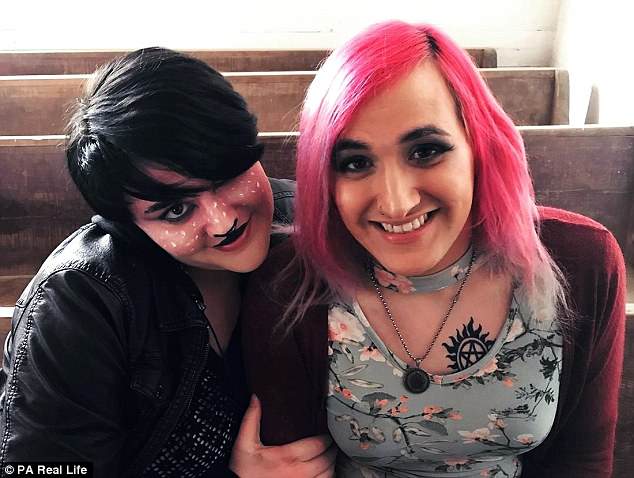 Xander and Nic together. Despite living in an area not known for its progressive views, they’ve received no negativity towards their relationship

‘We function so well as a trio, that I don’t think marriage will change things.’

Now, Nic is speaking out to dispel common myths around polyamory, saying that the trio have never experienced any negativity for their relationship.

The 27-year-old continued: ‘I’m out to all my friends and people my age – millennials and those from Gen Z – are very liberal and accepting anyway.

‘Where we live, in the south of America, doesn’t have a great reputation for the way it deals with “otherness”, but a lot of the time, it gets brought up around people who already know, so it isn’t an issue.’