The so-called Madison dinners were revealed by NBC News amid growing questions over Pompeo’s use of taxpayer resources after he got Donald Trump to fire the State Department Inspector General who was investigating whether he got an aide to walk his dog.

Steve Linick was removed last Friday night amid his probe into whether Pompeo’s long-term aide Toni Porter would order food and do laundry for him and his wife Susan, and walk his beloved dog, Sherman.

But the dinners represent a new front and could damage his relationship with Trump, as they might be seen as him building his own power base and donor network with taxpayer resources.

‘If the president knew about any of this, he would have fired Pompeo months ago,’ a senior Trump official told NBC News.

Dressed for dinner: Mike and Susan Pompeo invited hundreds of stars, power brokers and billionaires to dine at the State Department – with their valuable contact details going to her private email address 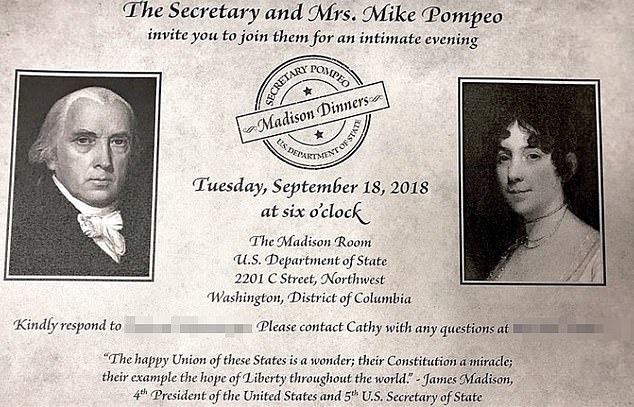 Formal invitation: the 6pm dinners are named for James and Dolley Madison who held salons – and according to one historian, paid their own expenses 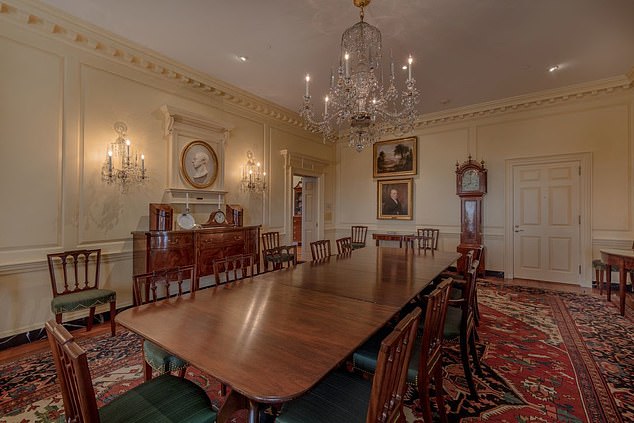 Eat here: The intimate James Madison Dining Room is used for the meals 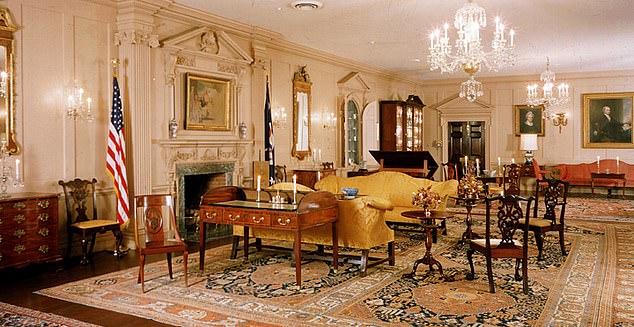 Receiving space: The John Quincy Adams State Drawing Room is where the Secretary of State greets guests for receptions 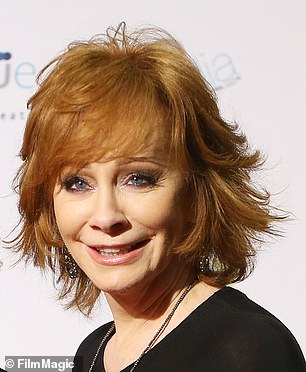 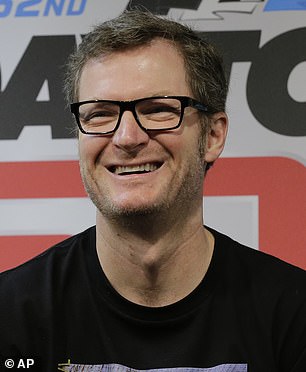 American country singer Reba McEntire (left) is one of the many guests from the entertainment industry to have attended a dinner, alongside Dale Earnhart Jr.

Pompeo named the dinners after James and Dolley Madison, who were known for their entertaining when he was secretary of state.

WHO’S WHO OF THE POMPEO’S GUESTS

THE BILLIONAIRES AND THE DONORS

Matt and Mercedes Schlapp. He runs CPAC, she is a senior Trump campaign aide

*Unclear if they attended

NBC News said a total of around 500 had attended since he entered office in 2018 and until they were suspended in March because of coronavirus.

In the State Department’s most glittering rooms they rubbed shoulders with Reba McEntire, the country star, Dale Earnhardt Jr, the NASCAR star, and Fox News’ Brian Kilmeade and Laura Ingraham.

Also on the list were Supreme Court justices Neil Gorsuch and Samuel Alito, and New Hampshire governor Chris Sununu, the British-American conservative celebrity historian Niall Ferguson, and Dan Cathy, the Chik-Fil-A chairman, a major donor in the past to efforts to prevent the legalization of same-sex marriage.

The dinners had attracted the scrutiny of the State Department’s lawyers, who advised that to qualify for taxpayer funding they had to further the aims of foreign policy.

Records reveal 29 per cent of guests are from the corporate world, and a quarter from the media or entertainment industries.

Close to a third work in politics and 14 per cent were diplomats or foreign officials, NBC said. Records show no Democrats from the House or Senate have ever been invited.

The liaison between officials and Pompeo’s office was Porter.

Porter served as Pompeo’s district director when he was a congressman from Kansas. She then followed him to the CIA and on to Foggy Bottom.  The investigation began after ‘multiple complaints’ to an IG hotline, though these did not come from Porter herself.

Trump defended Pompeo on Monday after the story exploded – although neither mentioned it during a cabinet meeting Tuesday.

‘And now I have you telling me about dog walking, washing dishes and you know what, I’d rather have him on the phone with some world leader than have him wash dishes because maybe his wife isn’t there or his kids aren’t – you know,’ Trump said.

Linick had also allegedly made an inquiry to the protocol office about Pompeo’s lavish dinners shortly before Trump fired him last week, believed to have been at Pompeo’s request.

While Madison was well known for inviting foreign diplomats over for dinner, her ‘certainly paid his own entertainment expenses’ Kevin Gutzman, a professor at Western Connecticut State University who wrote a biography of Madison said.

Such information is hugely valuable to a politician building a network of influential friends and financial benefactors.

Major players in Republic politics, including former Bush strategist Karl Rove and David Urban, a lobbyist and political consultant on Trump’s 2020 advisory committee, have been invited to the dinners.

Treasury Secretary Steven Mnuchin, Commerce Secretary Wilbur Ross and Defense Secretary Mark Esper have all been invited, though it is not known whether all of them attended.

Pompeo and his wife have also hosted national security adviser Robert O’Brien, Raytheon CEO Thomas Kennedy and Princess Reema bint Randar, the Saudi ambassador to the US, a seating list for a January dinner seen by NBC revealed. 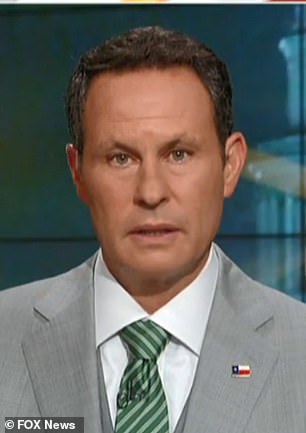 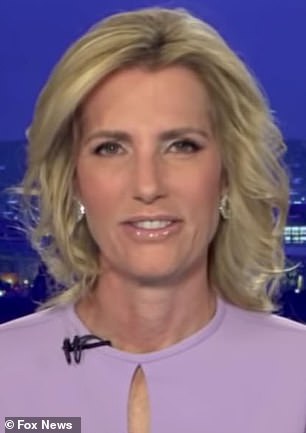 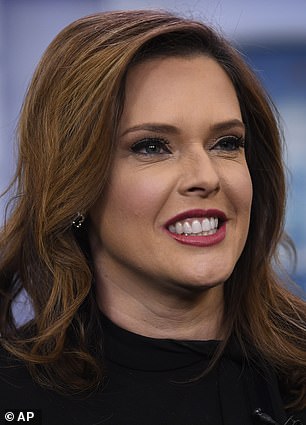 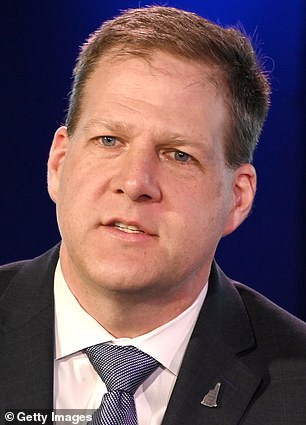 Big Republican names: Mercedes Schlapp, part of a Washington D.C. power couple with husband Matt and a Trump campaign advisor was a guest; so too was Chris Sununu, the Republican governor of New Hampshire

The Malaysian ambassador and Rep. Lee Zeldin, R-N.Y., a key defender of Trump during the impeachment proceedings, finished off the list. 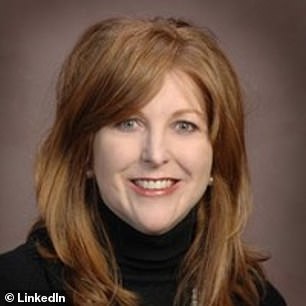 Longtime Mike Pompeo aide Toni Porter has been identified as the government employee whose role allegedly doing personal business for the secretary of state was being probed by an inspector general. She is also a key figure in the ‘Madison dinners’

The dinners are not disclosed on Pompeo’s public schedule, lending weight to what some critics say is yet evidence of using government resources for potential political or personal gain.

Invitations seen by NBC news describe the gatherings as an ‘intimate evening’ inspired by secretary of state James Madison who ‘hosted dinners that gathered thinkers and leaders to share ideas on the future of America and the World.’

An official invite says: ‘Through the Madison Dinner Series, Secretary Pompeo honors their wisdom in seeing the value of building relationships and sharing intellectual thought to enrich our country and to further our diplomatic goals.’

The evening usually starts at around 6pm, where officials greet guests arriving at the Harry S. Truman Building, sources said.

They are given a walking tour upstairs before being served pre-dinner cocktails. Either Pompeo or his wife give a welcome toast, and the conversation is informal with no specific topic or theme, NBC reported.

The menu changes to reflect the season, and an events checklist reveals a harpist is brought in to serenade the cocktail hour with a photographer arranged to snap a group photo in front of the fireplace.

One dinner attendee told NBC news: ‘It’s not the secretary of state of the United States. It’s more like Secretary Mike and Susan.’

Guests tend to leave at around 9pm and are gifted a journal and pen which are custom-embossed with Madison Dinner logos.

Sources said concerns were flagged to the State Department’s legal adviser when the dinners started. They said the adviser responded and said events hosted by Pompeo should be related to foreign policy.

Several committees on Capitol Hill have also been looking into the dinners, the sources told NBC News. 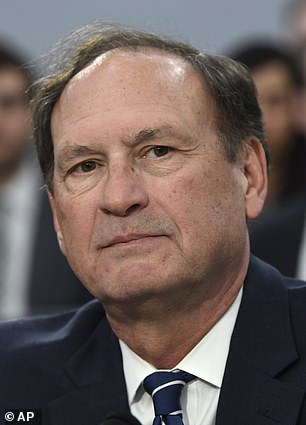 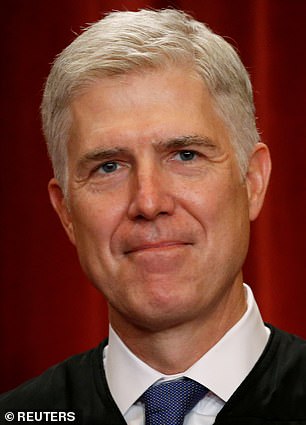 ‘I am concerned by allegations that the Secretary appears to be using those taxpayer resources to host large domestic-focused political gatherings that serve little-to-no foreign policy purpose’, he wrote.

The letter demanded a ‘complete accounting’ of funds used for the dinners as well as copies of comments Pompeo may have made, NBC reported.

The involvement of Pompeo’s wife – who is not a government official – and manner in which he has carried out the dinners have raised concerns.

The dinners are funded from the State Department’s Emergencies in the Diplomatic and Consular Service Appropriation, known as the ‘K Fund’.

The fund can be used for ‘confidential requirements in the conduct of foreign affairs as well as other authorized activities that further the realization of U.S. foreign policy objectives,’ according to the State Department’s website.

Current and former officials said State Department officials work to ensure a significant proportion of foreign dignitaries or officials attend, but cost estimates are not circulated to those working on the events.

Sources claimed that the bill for the evening likely costs several hundreds of dollars per plate, with the total cost of the dinners believed to be at least six-figures, NBC News said.

The gatherings also sidestep the normal procedure for official events for the secretary, when a activity sheet is sent out from the officer notifying other officials of plans.

Those familiar with the dinners said they are instead arranged informally, which means there is no co-ordination with desks overseeing specific regions of the world.

State Departments handling specific areas could therefore be entirely oblivious to ambassadors attending the dinners, meaning follow up to ascertain what was discussed could be entirely missed.

Susan Pompeo plays an integral role in the Madison Dinners.

Former officials said each secretary is given permission to decide how involved their spouses should be, and no regulation prohibits them from the role of de facto social secretary.

Morgan Ortagus, State Department spokeswoman, said the dinners are ‘a world-class opportunity to discuss the mission of the State Department and the complex foreign policy matters facing our exceptional nation.

She added that Pompeo ‘has benefited greatly from these gatherings as he has gained knowledge listening to his guests from all across the political spectrum and all around the world.’

‘Foreign policy-focused social gatherings precisely like these are in the finest tradition of diplomatic and American hospitality and grace,’ Ortagus said.

‘The Secretary looks forward to continuing these Madison Dinners as they are an important component of the execution of his duties as Secretary of State.’

Trump critic Michael Steele and former Republican National Committee Chairman who attended one of the dinners said they are not ‘unusual’.

The evening was in line with Pompeo’s diplomatic role, and he added: ‘There’s no big deal there.’