Pope Francis has apologised to victims of clerical sexual abuse, after defending a Chilean bishop who is under scrutiny, and accused alleged victims of slander.

Last week, the Pope saidthat until he sees proof that Bishop Juan Barros was complicit in covering up sex crimes of paedophile Reverend Fernando Karadima, accusations against Barros are ‘all calumny.’

Speaking today, the Pope acknowledged that he had ‘wounded many’ with his choice of words and tone of voice.

But while the contrite pope expressed regret, he also said he was certain that Barros, was innocent and would keep his job.

His remarks last week demanding proof of Barros’ guilt provoked outrage among victims and their representatives, who noted that Karadima was sentenced by the Vatican to a lifetime of ‘penance and prayer’ for his crimes in 2011.

A Chilean judge also found the victims to be credible, saying that while she had to drop criminal charges against Karadima because too much time had passed, proof of his crimes wasn’t lacking.

‘As if I could have taken a selfie or a photo while Karadima abused me and others and Juan Barros stood by watching it all,’ tweeted Barros’ most vocal accuser, Juan Carlos Cruz.

‘These people are truly crazy, and the pontiff talks about atonement to the victims.

‘Nothing has changed, and his plea for forgiveness is empty.’ 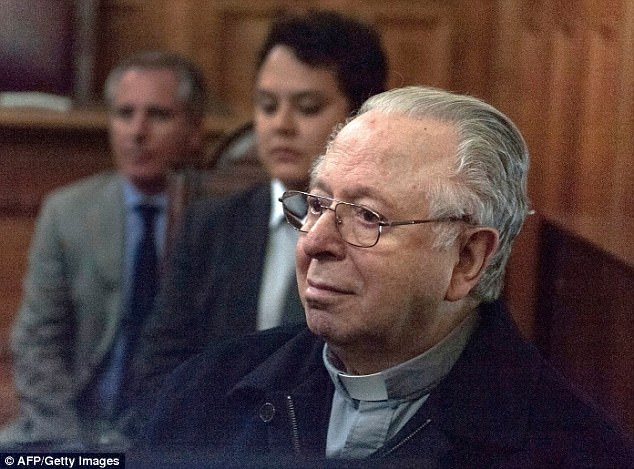 The Karadima scandal dominated the Pope’s visit to Chile and is likely to play a role in his three-day trip to Peru that began late on Thursday.

Karadima’s victims reported to church authorities as early as 2002 that he would kiss and fondle them in the swank Santiago parish he ran.

They claimed Barros had witnessed the abuse but did nothing about it. But officials refused to believe them and Barros denied the allegations.

It was only when the victims went public with their accusations in 2010 that the Vatican launched an investigation that led to Karadima being removed from ministry.

The emeritus archbishop of Santiago then apologised for refusing to believe the victims from the beginning.

Wounds of the scandal were reopened by the Pope in 2015 when he named Barros, a protege of Karadima, as bishop of the southern diocese of Osorno.

His appointment outraged Chileans, badly divided the Osorno diocese and further undermined the church’s already shaky credibility in the country.

The Pope had aimed to help heal wounds this week by meeting with abuse victims and begging forgiveness for the crimes of church pastors.

But he struck a defiant tone when asked about Barros by a Chilean journalist.

‘The day they bring me proof against Bishop Barros, I’ll speak,’ he said.

‘There is not one shred of proof against him. It’s all calumny. Is that clear?’

He had previously defended the appointment of Barros in Osorno, calling the controversy ‘stupid’ and the result of a campaign mounted by leftists.

But the Vatican was so worried about the fallout from the Karadima affair that in 2014 it was prepared to ask Barros and two other Karadima-trained bishops to resign and go on a year-long sabbatical.

According to a letter dated January 31, 2015 from the Pope to the executive committee of the Chilean bishops’ conference, the plan fell apart and Barros was sent to Osorno.

Juan Carlos Claret, spokesman for a group of Osorno lay Catholics who have mounted a three-year campaign against Barros, questioned why Francis was now accusing the victims of slandering Barros when the Vatican was so convinced of their claims that it planned to remove him in 2014.

‘Isn’t the pastoral problem that we’re living (in Osorno) enough to get rid of him?’ Claret asked.

The reference was to the fact that – guilty or not – Barros has been unable to do his job because so many Osorno Catholics and priests don’t recognize him as their bishop.

They staged an unprecedented protest during his 2015 installation ceremony and have protested his presence ever since. 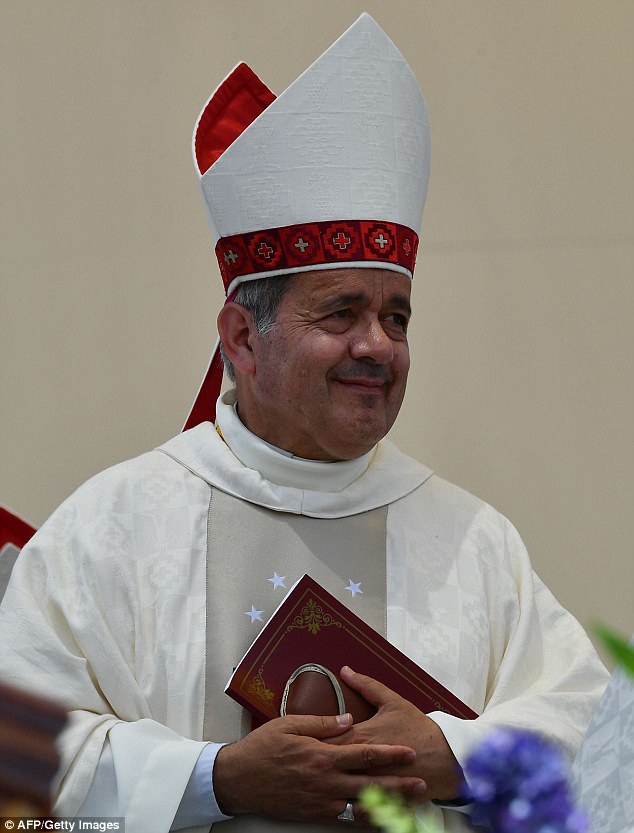 Wounds of the scandal were reopened by the Pope in 2015 when he named Juan Barros (pictured), a protege of Karadima, as bishop of the southern diocese of Osorno

Anne Barrett Doyle, of the online database BishopAccountability.org, said it was ‘sad and wrong’ for the Pope to discredit the victims since ‘the burden of proof here rests with the church, not the victims – and especially not with victims whose veracity has already been affirmed.’

‘He has just turned back the clock to the darkest days of this crisis,’ she said in a statement.

‘Who knows how many victims now will decide to stay hidden, for fear they will not be believed?’

For years Catholic officials have accused victims of slandering and attacking the church with their claims.

But until Francis’ words on Thursday, many in the church and Vatican had come to reluctantly acknowledge that victims usually told the truth and that the church for decades had wrongly sought to protect its own.

German Silva, a political scientist at Santiago’s Universidad Mayor, said the Pope’s comments were a ‘tremendous error’ that will reverberate in Chile and beyond.

Patricio Navia, political science professor at Diego Portales University in Santiago, said Francis had gone much further than Chilean bishops in acknowledging the sexual abuse scandal, which many Chileans appreciated.

‘Then right before leaving, Francis turns around and says ‘By the way, I don’t think Barros is guilty. Show me some proof’,’ said Navia, adding that the comment will probably erase any good will the pope had won over the issue.

Navia said the Karadima scandal had radically changed how Chileans view the church.

‘In the typical Chilean family, parents (now) think twice before sending their kids to Catholic school because you never know what is going to happen,’ he said.