Pope Colombia visit gets off to bumpy start with black eye

Pope Francis’s trip to Colombia got off to a bit of a rocky start when he bumped his head on the popemobile.

The religious leader was travelling through the city of Cartagena when his vehicle was forced to brake sharply amid swarms of well-wishers.

Francis, who only had a hip-high bar to hold onto, lost his balance and suffered a bruised, black left eye and a cut on his eyebrow that dripped blood onto his white cassock.

The cut was quickly bandaged with a butterfly patch and he carried on without incident with his program. Devotees reacted to the wound with a mix of amazement and concern.

A bruised Pope Francis smiles during his visit to the Sanctuary of St. Peter Claver, in Cartagena 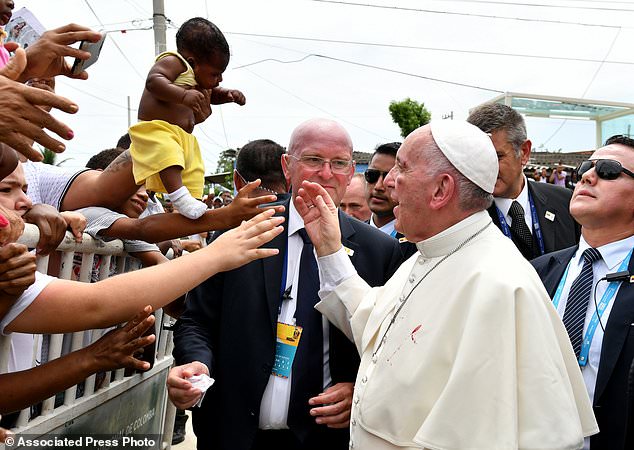 Pope Francis is shown a baby to bless during his arrival in the city. He continued to smile despite his injury 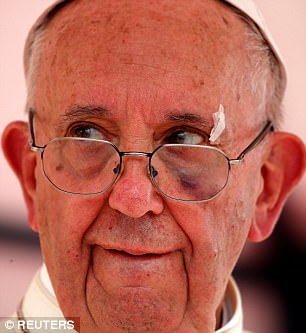 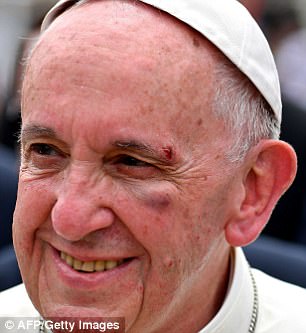 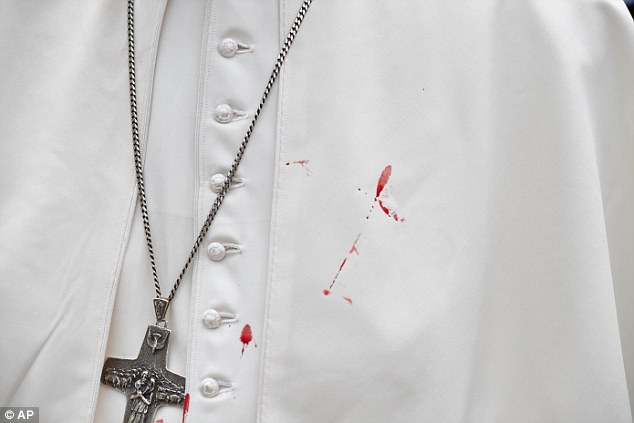 Blood can be seen on the pope’s white cassock. A Vatican spokesman said the holy leader was bruised but fine

‘This holy blood is staying in Colombia,’ said Ricardo Morales, a lawyer who lined up outside St. Peter Claver’s church for a glimpse of the pope. ‘He made a great effort to be here and from now on it’s our obligation to make a similar effort to thank him for everything he has done.’

Vatican spokesman Greg Burke said that ‘The pope is fine’ but added that he has ‘a bruise on his cheekbone and eyebrow’.

Once recovered, Francis visited the St. Peter Claver church, where he praised the 17th century missionary for having recognized the inherent dignity of slaves. Francis, known for his own simple and austere style, said Claver was ‘austere and charitable to the point of heroism.’

Claver, the self-described ‘slave of the slaves forever,’ has been revered by Jesuits, popes and human rights campaigners for centuries for having insisted on treating slaves as children of God and worthy of love when others considered them mere merchandise to be bought and sold.

In a prayer Sunday in front of Claver’s church, Francis said the legacy of the Spanish priest should serve as a model for the Catholic Church today to ‘promote the dignity of all our brothers and sisters, particularly the poor and the excluded of society, those who are abandoned, immigrants and those who suffer violence and human trafficking.’

‘Here in Colombia and in the world, millions of people are still being sold as slaves; they either beg for some expressions of humanity, moments of tenderness, or they flee by sea or land because they have lost everything, primarily their dignity and their rights,’ he said. 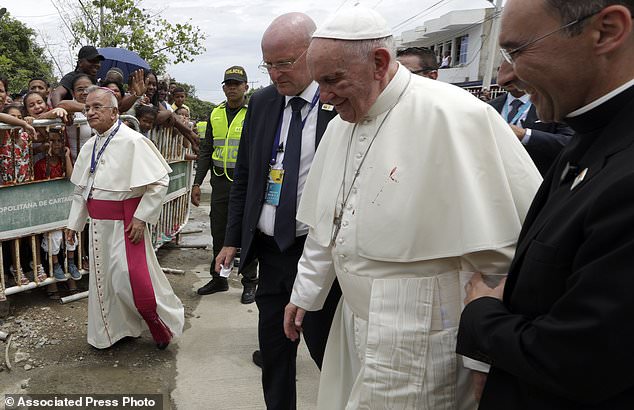 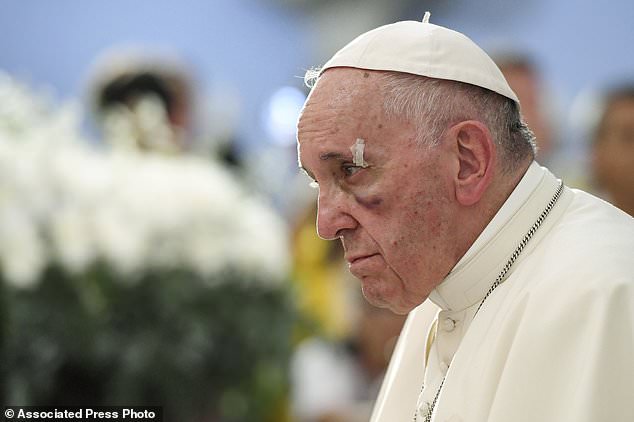 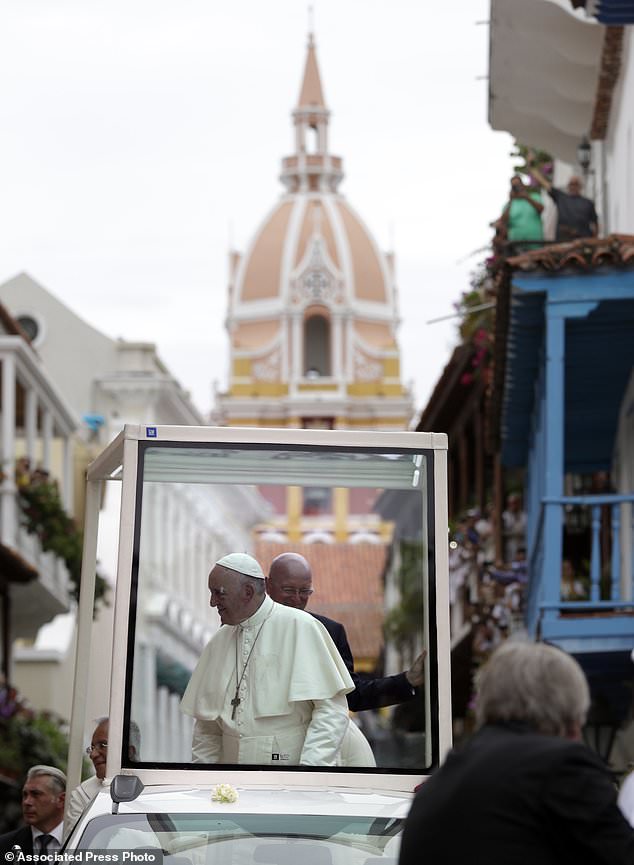 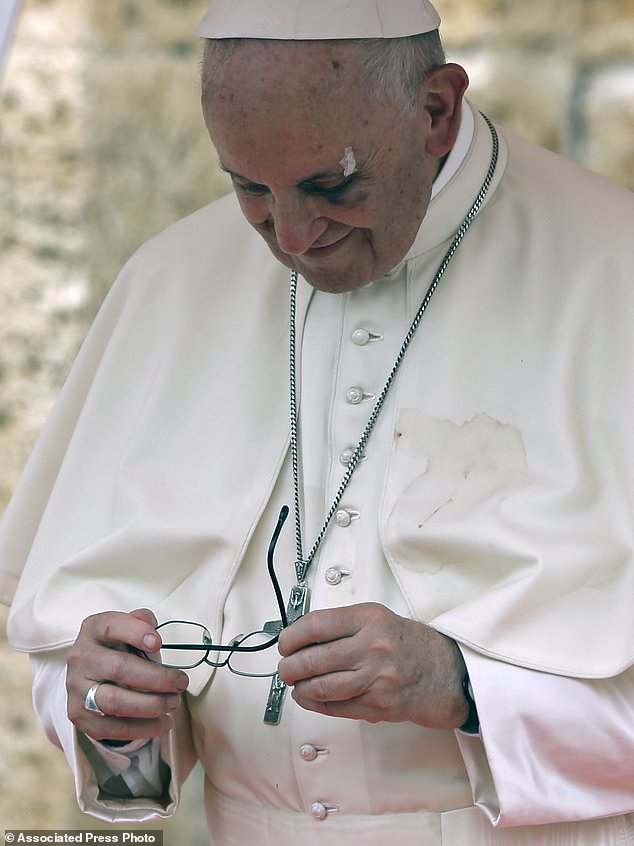 Like Claver, history’s first Latin American pope has insisted on ministering to society’s most marginal. He takes special care of the homeless who live around the Vatican, makes regular phone calls to prisoners, brought a dozen Syrian refugees home with him from a Greek refugee camp, and embraces the sick, the maimed and the deformed every chance he gets.

He has also strongly denounced current-day slave trade, calling human trafficking a crime against humanity and leading other faith leaders to take a united stand against it.

Francis prayed at Claver’s tomb after laying the foundation for new residences for homeless people in Cartagena, the city famous for its UNESCO-awarded colonial center but also home to slums and shanties. 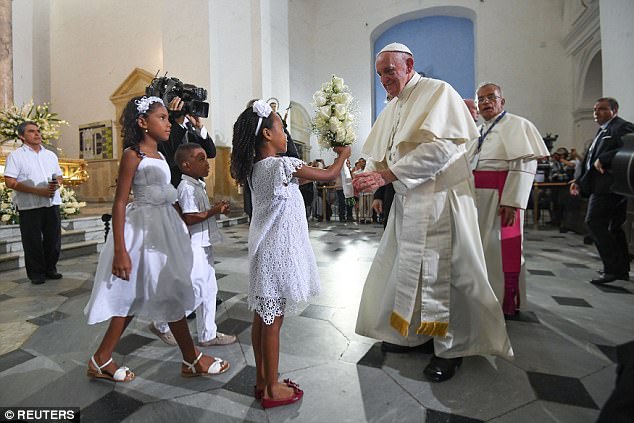 Pope Francis is greeted by children during a visit to the Sanctuary of St. Peter Claver

He was to celebrate Mass in Cartagena’s port Sunday before returning to Rome, ending a five-day visit highlighted by a huge prayer of reconciliation that brought together victims of Colombia’s long-running conflict and demobilized guerrillas and paramilitary fighters.

Francis had refrained until Sunday from speaking out about the political and humanitarian crisis next door in Venezuela.

But in remarks added into his Sunday prayer, Francis called for an end to political violence in Venezuela and protection for the poor who have been most hurt by the crisis.

The large community of Venezuelan exiles in Colombia had been pushing Francis to make a strong statement against President Nicolas Maduro. Francis met with Venezuelan bishops in Colombia but refrained from taking the same strident tone taken by the Vatican in recent statements in which it has called on Maduro to respect human rights and withdraw plans to rewrite Venezuela’s constitution.