Senior American bishops have hit out at Pope Francis for endorsing same-sex unions, calling the remarks ‘private opinions’ that do not represent the teachings of the church.

Cardinal Raymond Burke, an American prelate of the Catholic Church, patron of the Sovereign Military Order of Malta and former Archbishop of St. Louis, accused the Pope of sowing ‘error and confusion’ with words that ‘do not correspond to the constant teaching of the Church’.

Burke, an outspoken critic of Francis, was backed by Bishop Thomas Tobin of Providence and Cardinal Sean O’Malley of Boston, who said the remarks are not an endorsement of ‘homosexual activity’.

It comes after Francis told filmmakers that same-sex couples are ‘children of God and have a right to be in a family’ during a 2019 interview made public this week.

US Cardinal Raymond Burke, patron of the Sovereign Military Order of Malta and an outspoken critic of Francis, accused the Pope of sowing ‘error and confusion’ among Catholics 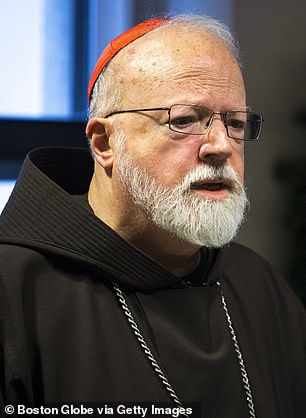 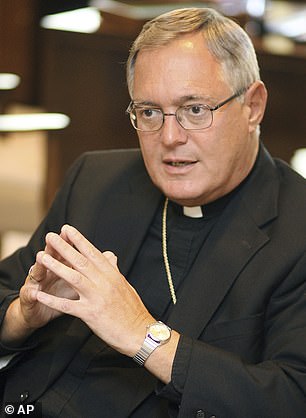 Cardinal Sean O’Malley of Boston (left) and Bishop Thomas Tobin of Providence (right) also weighed in, saying Pope’s words should not be seen as an ‘endorsement of homosexuality’

Francis came out in support of same-sex unions while serving as the Archbishop of Buenos Aires, but has not spoken out on the issue publicly since he became pope.

His remarks, during a feature-length film called Francesco that was aired at the Rome Film Festival on Wednesday, were viewed by many as a tacit endorsement of same-sex relationships.

Responding to the remarks, Cardinal Burke wrote: ‘Such declarations generate great bewilderment and cause confusion and error among Catholic faithful, inasmuch as they are contrary to the teaching of Sacred Scripture and Sacred Tradition.

‘They cause wonderment and error regarding the Church’s teaching among people of good will, who sincerely wish to know what the Catholic Church teaches.

‘They impose upon pastors of souls the duty of conscience to make fitting and necessary clarifications.

He added: ‘The context and the occasion of such declarations make them devoid of any magisterial weight.

‘They are rightly interpreted as simple private opinions of the person who made them.

‘These declarations do not bind, in any manner, the consciences of the faithful who are rather obliged to adhere with religious submission to what Sacred Scripture and Sacred Tradition, and the ordinary Magisterium of the Church teach.’

Burke goes on to say that all Catholics are commanded to ‘hate the sin but love the sinner’, and that his remarks are not an endorsement of homophobia.

But, he adds: ‘To speak of a homosexual union, in the same sense as the conjugal union of the married, is… misleading, because there can be no such union.’ 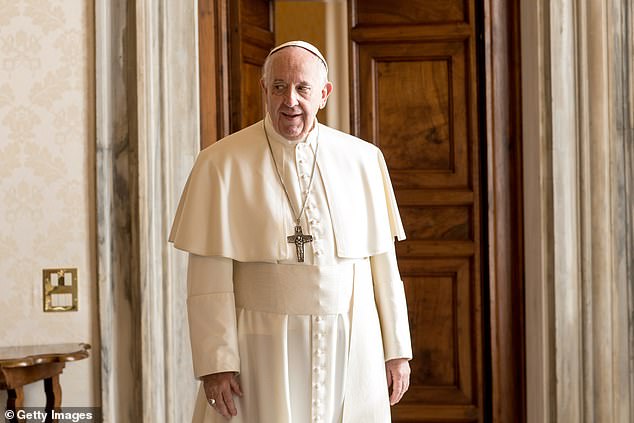 Francis repeated his endorsement of same-sex unions for the first time as Pope during a film that was released this week, saying gay couples are still ‘children of God’

Bishop Tobin was one of the first to speak out in opposition to Francis, also accusing him of contradicting church teachings.

The Pope’s statement clearly contradicts what has been the long-standing teaching of the Church about same-sex unions,’ Tobin said.

‘The Church cannot support the acceptance of objectively immoral relationships.’

And Cardinal O’Malley added his voice to the dissent on Thursday, saying that Francis ‘strongly and consistently teaches that marriage is between a man and woman for a lifetime and that this is God’s plan for having and raising children.’

‘The Holy Father recognizes that in civil society there can be cogent reasons to enact laws providing for civil unions which are not the same as the institution of marriage.

‘Pope Francis has seen civil unions as a way for governments to provide protections and health care for couples in long-term, committed relationships, whether they be siblings or friends or partners. Such arrangements are not always of a sexual nature.

‘The Holy Father is very aware of the suffering and alienation of homosexual individuals, gay people, who are rejected by family and society.

‘He is also keenly aware of the parents and loved ones who also suffer because a member of their family is bullied or marginalized for being different.

‘The demands of sexual morality are very challenging for anyone seeking to lead a life of faithful discipleship.

‘We do not serve people well by falsely claiming that we can change the Decalogue.

‘Our task is to show people that we love them and care about them and that together we can strive to be better people, more generous, more courageous and more faithful to what God is calling us to do.’

Elsewhere, in the Philippines, Bishop Arturo Bastes said he has ‘very serious doubts about the moral correctness’ of the Pope’s stance. 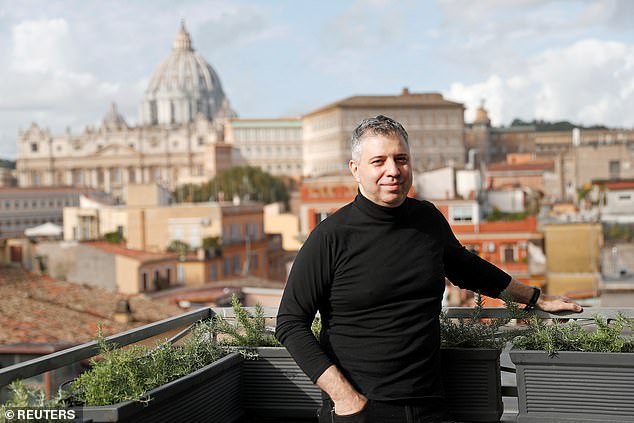 Francis made the comments in 2019, in footage that was released by filmmaker Evgeny Afineevsky (pictured) in a film about the pontiff this week

But Harvard professor of divinity Francis Clooney said he does not expect many senior Catholics to go public with their denunciations of the Pope.

‘[There will be a backlash], but not as much as one might think, he told The Harvard Gazette.

‘This news is based on a documentary, and it’s in keeping with things Francis has said previously.

‘Conservative critics are not going to be surprised by this, even if they will be very annoyed by it.

‘People who are against any compromise in this direction will see this as another sign that Francis has gone astray, that he is not adhering to church teaching.

‘And they will add this to their list of complaints about him, even though he’s the pope and deserving of their respect.’

Those likely to be particularly offended by Francis’s words are African bishops, who have spoken out strongly against homosexuality for many years.

Cardinal Robert Sarah, of Guinea, declared in 2015 that ‘Western homosexual and abortion ideologies, and Islamic fanaticism’ are equivalent to the ‘beasts’ of Nazi and communist ideology.

Meanwhile the Catholic Bishops Conference of Nigeria last year decreed that ‘lesbian, gay, bisexual, transgender and queer (LGBTQ) were disordered sexual orientations that could not be accepted as a normal way of life’.

However, the Pope’s words also received praise from other quarters, including the Catholic head of the UN, Antonio Guterres.

‘This is a clear demonstration of a fundamental principle, which is the principle of nondiscrimination,’ said Guterres in New York.

‘And one of the things that has been very clear in the UN doctrine on this is that non-discrimination is also relevant in the questions of sexual orientation.

‘So this is decision of the Pope is, of course, extremely welcome from our perspective.’

Who is Cardinal Raymond Burke?

Cardinal Raymond Burke was born in 1948 in Wisconsin where he grew up on a small dairy farm.

He was one of six children to his devout Catholic parents.

He said he always thought about being a priest but said his ambitions grew when his father died of a brain tumor and he would watch his priest come and give his father communion and hear his confession.

He trained to be a priest in La Crosse, Wisconsin, Washington D.C. and Rome, before being ordained by Pope Saint Paul VI in 1975.

He was then ordained a bishop in 1995 by Pope Saint John Paul II, and served for almost nine years as Bishop of La Crosse and four years as Archbishop of St. Louis, Kentucky.

He was named a cardinal in 2010 by Pope Benedict XVI.

The Cardinal holds very traditional views in the Catholic Church and is widely thought of as the leader of its conservative wing.

Burke is adamant that the church stay true to its traditions and has argued against it changing its stance on homosexuality, women joining the priesthood, abortion, divorce and Islam.

This has led to a number of clashes with Pope Francis who is seeking to modernize the church.

Here’s some of Burke’s controversial views and comments:

Burke has spoken out against the church showing greater acceptance to gay people and same-sex marriage.

In 2014 he said same-sex relationships are ‘profoundly disordered and harmful’ and that homosexuality is an ‘ailment’.

This week he hit out at Francis’ acceptance of same-sex unions saying: ‘To speak of a homosexual union, in the same sense as the conjugal union of the married, is… misleading, because there can be no such union.’

Burke has said on multiple occasions that people who support the right of women to have an abortion should not take communion.

In the lead-up to the 2004 presidential election, he vowed that he would not give communion to John Kerry or other Catholic politicians who publicly supported abortion and told Catholics they shouldn’t vote for politicians who support abortion.

After Barack Obama was inaugurated as president in 2008 he said: ‘Since President Obama clearly announced, during the election campaign, his anti-life and anti-family agenda, a Catholic who knew his agenda regarding, for example, procured abortion, embryonic-stem-cell research, and same-sex marriage, could not have voted for him with a clear conscience. ‘

He called Donald Trump’s election a victory for anti-abortion beliefs.

In 2008, Burke – when he was Archbishop of Saint Louis – banned a St. Louis nun from Church ministries and the sacraments as punishment because she said she believed women should be allowed to join the priesthood and attended an ordination ceremony of a woman to the priesthood at a Jewish synagogue.

In 2015, Burke hit out at ‘radical feminism’ in the Church which he said has ‘assaulted the Church and society since the 1960s has left men very marginalized’.

He also slammed the introduction of female altar servers as unwelcome ‘feminization’.

Burke has fought to prevent divorced Catholics remarrying or receiving communion after they remarry.

When some bishops began allowing remarried Catholics to receive communion in 2014, he said ‘the church’s teaching on marriage is finished.’

In 2016, Burke was criticized by other prominent figures in the church including Archbishop Diarmuid Martin of Dublin for saying ‘Islam wants to govern the world’.

He reiterated the claims again in 2019.

Steve Bannon, the former Trump adviser and the man arrested this year for an alleged massive border wall scam, and Burke became allies working together on an organization to create a far-right political institute in Italy.

Burke sensationally cut ties with Bannon in June when Bannon said he endorsed priests being allowed to marry and that he believed many clergy members in the Vatican are gay.

‘I have never worked with Mr. Bannon in his organization,’ he said, claiming to have met him once.

Burke is Francis’ most vocal critic in the Church, slamming the Pope’s attempts to relax Church attitudes on matters such as homosexuality and divorce.

Francis removed Burke from the Congregation of Bishops in 2013, and later from the Apostolic Signatura to the less senior post of patron of the sovereign military order of Malta.

When Francis did’t reappoint him to the Congregation of Bishops, Burke said: ‘One gets the impression, or it’s interpreted this way in the media, that he thinks we’re talking too much about abortion, too much about the integrity of marriage as between one man and one woman. But we can never talk enough about that.’