Pope Francis today admitted that sexual abuse scandals are driving faithful people away from the Catholic Church – as a bombshell report revealed 3,700 children were assaulted in Germany.

Speaking on tour in Estonia, he said the Church must change its ways if it wants to keep future generations.

He told a gathering of young people that he knew many youths felt the church had nothing to offer them and simply doesn’t understand their problems today.

Pope Francis (pictured in Estonia today) admitted that sexual abuse scandals are driving faithful people away from the Catholic Church – as a report revealed 3,700 children were assaulted in Germany 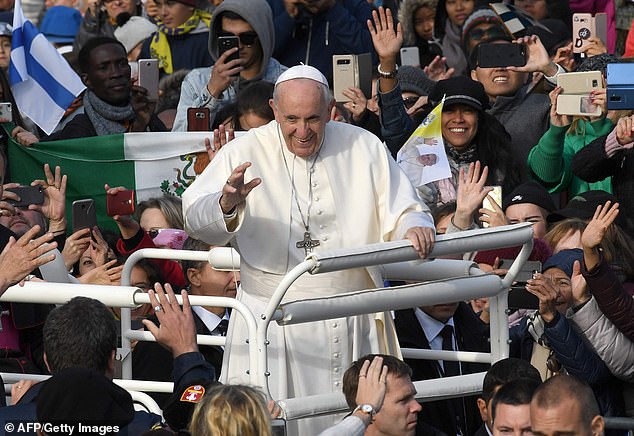 Pope Francis, in his Popemobile, greets the crowd as he arrives at the Liberty Square

‘They are outraged by sexual and economic scandals that do not meet with clear condemnation, by our unpreparedness to really appreciate the lives and sensibilities of the young, and simply by the passive role we assign them,’ he told a gathering of Catholic, Lutheran and Orthodox young people in the Kaarli Lutheran Church in the capital Tallinn.

He said the Catholic Church wants to respond to those complaints transparently and honestly.

‘We ourselves need to be converted,’ he said. ‘We have to realise that in order to stand by your side we need to change many situations that, in the end, put you off.’

It was a very public admission of the church’s failures in confronting sex abuse scandals, which have hit headlines recently with revelations of abuse and cover-up in the US, Chilean and now German church.

His comments came as the head of the Catholic Church in Germany apologised ‘for all the failure and pain’ after a report found thousands of children were sexually abused by priests, a number an expert said was only the ‘tip of the iceberg’. 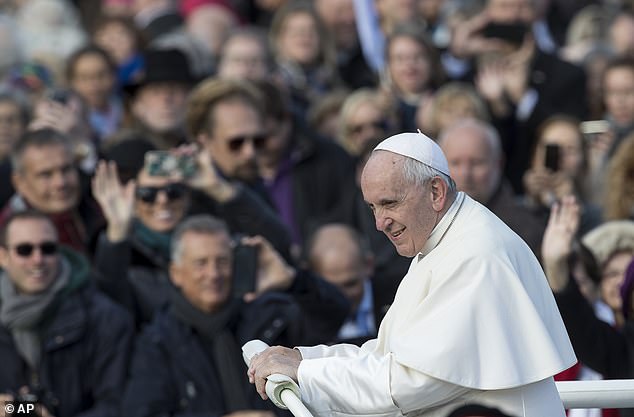 Pope Francis arrives to celebrate a Mass in Freedom Square, in Tallinn before leading mass 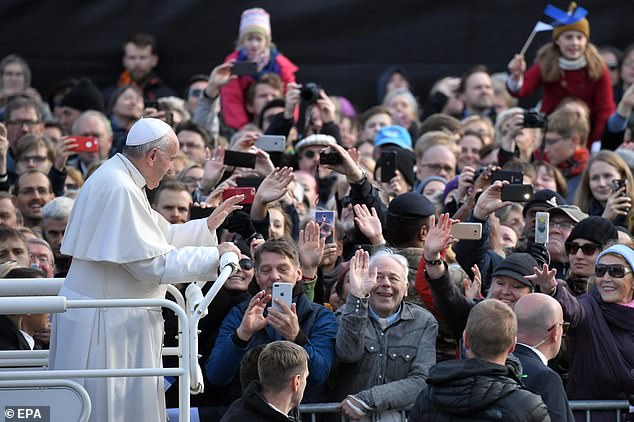 Pope Francis greets the crowd as he arrives in the Liberty Square, Tallinn

More than half of those abused between 1946 and 2014 were 13 or younger and nearly a third of them were altar boys.

The report, compiled by university researchers, found evidence that some files were manipulated or destroyed.

Many cases were not brought to justice, and that sometimes abusers were simply moved to other dioceses without the congregations being informed about their past, according to the results that leaked earlier in the German press.

‘For too long in the Church we have looked away, denied, covered up and didn’t want it to be true,’ Cardinal Reinhard Marx, chairman of the German Bishops’ Conference said at a news conference for the launch of the report in the central German city of Fulda on Tuesday. 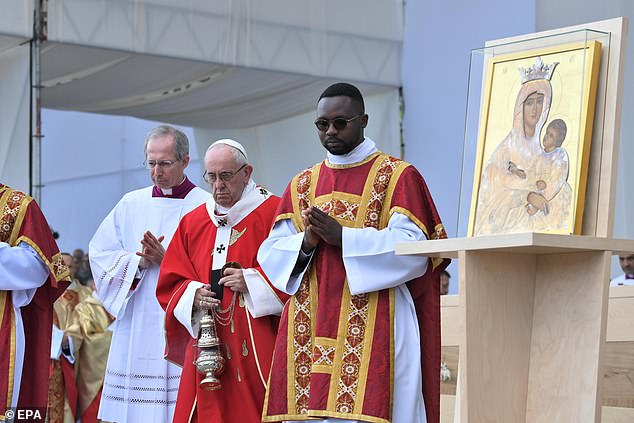 ‘For all the failure, pain and suffering, I must apologise as the chairman of the Bishops’ Conference as well as personally,’ Marx said.

‘The study opened our eyes to the fact that this issue has not been overcome.’

Harald Dressing of the Central Institute of Mental Health said that number represented only the lower bound of estimates as many cases were likely never reported or not taken seriously enough to make note of them in the files.

‘The resulting numbers are the tip of an iceberg whose actual size we cannot assess,’ Dressing said at the news conference.

Pope Francis has been branded an ‘ice-cold, cunning Machiavellian’ and a ‘liar’ by one of his cardinals, a German magazine reports.

The anonymous cardinal made the comments in a bombshell interview with Der Spiegel for its 19-page report on the Catholic Church sexual abuse scandal.

He said: ‘The pope preaches mercy, but in reality he is an ice-cold, cunning Machiavellian, and, what is worse – he lies.’

The cardinal was referring to claims that Francis knew about sexual abuse allegations against US Cardinal Theodore McCarrick long before he admitted he was aware of them or took any action. 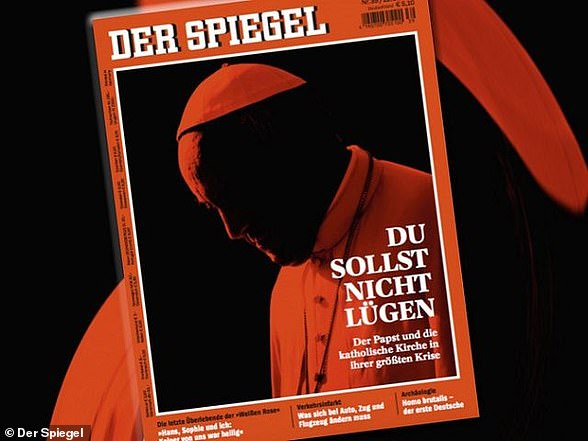 Pope Francis has been called an ‘ice-cold, cunning Machiavellian’ and a ‘liar’ by one of his cardinals who spoke to German magazine Der Spiegel (pictured is the front cover)

A report from a high-ranking cardinal in August claimed the pope knew about McCarrick in 2013 – but still employed him as a consultant in naming new American bishops until his resignation in July this year.

The report was the main item in this week’s Der Siegel magazine which featured a picture of the pope on the front and was titled Du Sollst Nicht Lügen (Thou Shalt Not Lie).

The report criticised the pope’s handling of abuse allegations generally, stating: ‘He often speaks at inopportune moments, yet in important moments remains silent.’

Francis’ visit to Tallinn marked the last stop in a four-day pilgrimage that also took him to Lithuania and Latvia. The trip aimed to encourage the Christian faith in the Baltics, which saw five decades of Soviet-imposed religious repression and state-sponsored atheism, as well as the World War II-era occupation by Nazi Germany.

Francis has been warmly welcomed in the region, even if Catholics are only a majority in Lithuania. Estonia only has 6,000 Catholics nationwide, but residents still seemed to welcome Francis’ inclusive message and flocked to his final Mass in a chilly but sun-soaked Freedom Square near Tallinn’s charming medieval center.

‘For me, it’s in my heart what I believe, and I think Francis is this kind of `papa’ who wants to change,’ said Marko Tubli, a Tallinn resident. ‘A church is not like `You must be this way and this way.’ It is more open.’ 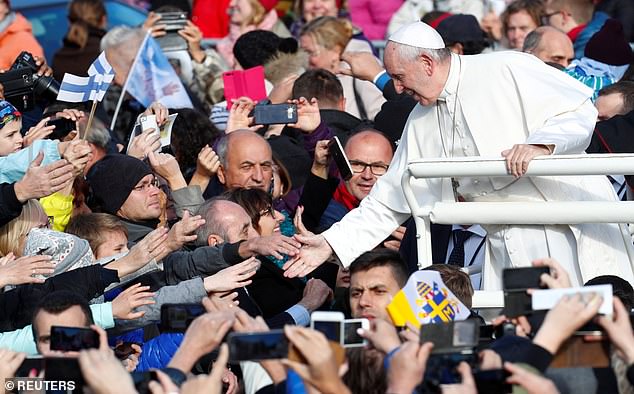 Upon arriving Tuesday, Francis praised Estonia’s social and economic transformation in the quarter century since the 1991 Soviet collapse. But he warned that a certain ‘existential ennui’ can set in when societies lose their cultural roots and put their faith in technological progress alone.

‘One of the evident effects of technocratic societies is a loss of meaning in life and the joy of living,’ he said. Interpersonal and intergenerational bonds can be lost, depriving young generations of foundations to build a common future, he said.

Estonia is considered both one of the most tech-advanced countries in Europe and one of the least religious societies in the world. More than half of Estonia’s 1.3 million people profess no religious affiliation. The Lutheran and Russian Orthodox churches count the most followers of those who do.

In her welcoming speech, Estonian President Kersti Kaljulaid acknowledged that rapid changes taking place amid robust economic growth – something particularly visible in the Baltic nations – shouldn’t mean the ‘vulnerable among us’ are neglected.

She presented Francis with a special digital ID card giving foreigners access to dozens of digital services in the Baltic country, ranging from medical services to signing legal contracts and filing taxes. The government says over 37,000 people from dozens of countries have been registered as ‘e-residents’ in Estonia.