By Miranda Aldersley For Mailonline and Afp

Pope Francis’s pick to replace Chile’s top cardinal – dismissed over allegations of covering up cases of clerical sexual abuse – has already been forced to deny that he himself had covered up the crimes of predatory priests.

The Pope appointed Spanish bishop Celestino Aos on Saturday to replace Chile’s top prelate Ricardo Ezzati, but just two days later Aos was forced to deny allegations from two sex abuse victims that he covered up for their abuser.

The case now appears to cast doubt on the 82-year-old Pope’s judgement.

Spanish bishop Celestino Aos (right), new apostolic administrator of the archbishopric of Santiago, has been forced to deny he covered up sexual abuse, the same allegations for which his predecessor Ricardo Ezzati (left) was dismissed

One of the victims, former seminarian Mauricio Pulgar, publicly slammed Aos’ appointment on Monday, saying he had dismissed his complaints in 2012.

‘Naming a person who helped cover up sexual assault, I think this is the worst mistake that the pope could make this year,’ said Pulgar.

Aos, in an interview on Chile’s Radio Cooperativa, denied ‘absolutely’ any cover-up in the case.

The allegations against Aos date from when he was bishop in Valparaiso, where he acted as the Church’s promoter of justice, a role akin to a prosecutor, investigating abuse cases.

He was accused by the abuse victims of denigrating their claims against a local priest, Jaime Da Fonseca, whom he cleared. Da Fonseca was found guilty in a subsequent investigation by the Vatican and expelled from the priesthood last year. 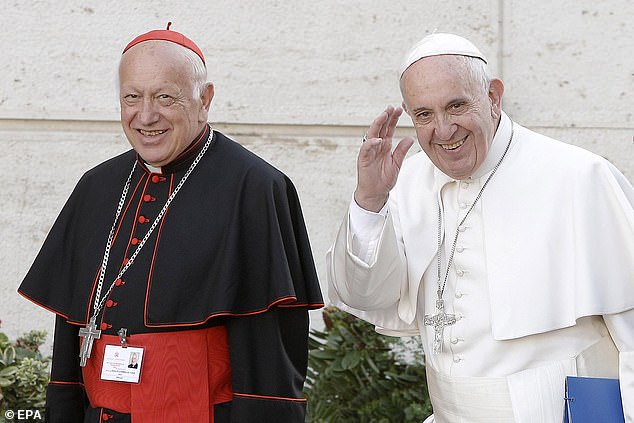 Cardinal Ricardo Ezzati (left) with Pope Francis. Ezzati insists he is innocent and has promised to co-operate with the investigation – but only if he is cleared by authorities first

Pulgar said that Aos had never given any credence to his allegations of abuse.

‘During the investigation, he did not consider them likely, and he didn’t inform me of his conclusions. He never gave me the opportunity to present evidence, or witnesses,’ Pulgar told Radio Cooperativo.

To date, 77-year-old Ezzati, who was the Catholic Church’s highest official in Chile, has insisted he is innocent. He has promised to cooperate with the investigation into his activities – if the authorities first clear him. 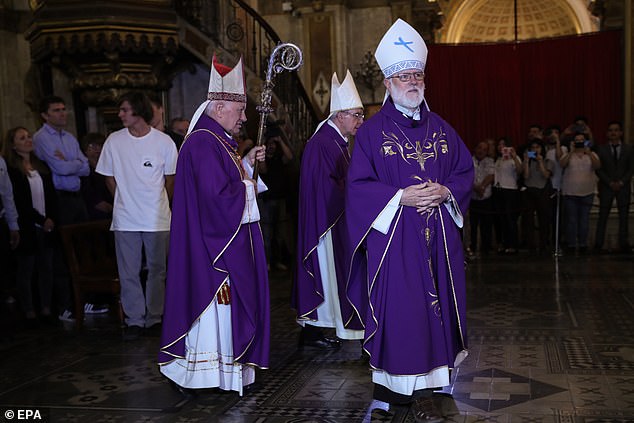 Celestino Aos (right) took office as apostolic administrator of Santiago archbishopric in replacement of Cardinal Ricardo Ezzati (left) on Sunday with a mass in which he promised to attend to victims of sexual abuse, but the next day he faced claims from two victims that he covered up for their abuser in the past

He presented his resignation to the pope in May 2018 along with all of Chile’s 34 bishops – including Aos. So far, the pontiff has accepted seven of the resignations.

The decision over Ezzati was made after Chile’s court of appeal on Friday confirmed he would face trial for not calling out sexual abuse by three priests, one of whom was his close aide.

Chile is one of the countries most caught up in the widening scandal of sexual wrongdoing by priests.

The pope, who is Argentine, was accused of not taking appropriate steps after a controversial visit he made in January 2018.

Afterwards, Francis listened more attentively to Chilean victims and made an apology before summoning all of Chile’s bishops to the Vatican in May 2018 for discussions that led to their resignation letters.