Poppy-pinching pigeon welcomes a baby at the Australian War Memorial

‘New life in a place that commemorates death’: Poppy-pinching pigeon welcomes a baby at the Australian War Memorial

A poppy-pinching pigeon who was discovered as the culprit responsible for flowers mysteriously disappearing from the Australian War Memorial has welcomed a baby bird.

The Australian War Memorial shared a picture of their newest temporary resident recently hatched and sitting in its floral nest next to one of the memorial’s stained glass windows to Twitter on Friday.

‘Earlier in the month we shared a story of a pigeon that had been busy preparing for new life in a place that commemorates death, sacrifice and renewal.’ the post read. 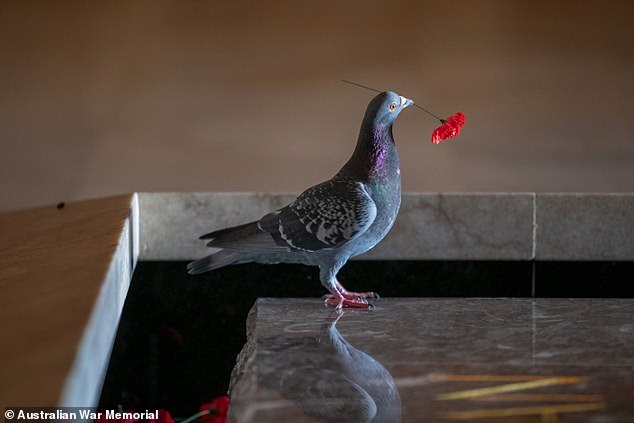 ‘Today we are pleased to share a photo of the baby pigeon’.

Staff working at the memorial in Canberra were left scratching their heads in October this year after they noticed the poppies disappearing from the tomb of the unknown Australian soldier.

But a maintenance worker noticed the carefully crafted nest of the thieved flowers in an alcove above a stained-glass window of a wounded soldier on October 25 and told staff.

Pigeons were widely used as messengers throughout the first and second World War, according to historian Dr Meleah Hampton.

‘Whenever we talk about animals in war, they are fulfilling a purpose or performing a task that people can’t do easily on their own,’ Dr Hampton said.

‘Particularly in the early wars, communication is really difficult. Wireless is in its absolute infancy in the First world War and telephone wires get broken apart in the shellfire on the Western Front.

‘So pigeons are particularly of use in warfare when you’ve got a couple of men trying to get a message from where they are back to the backline; a pigeon can get that through sometimes when nothing else can.’

Two Australian pigeons were awarded the Dickin Medal for their actions during the war.

The medal is commonly referred to as the Victoria Cross and is awarded for animals displaying devotion and duty during the war. 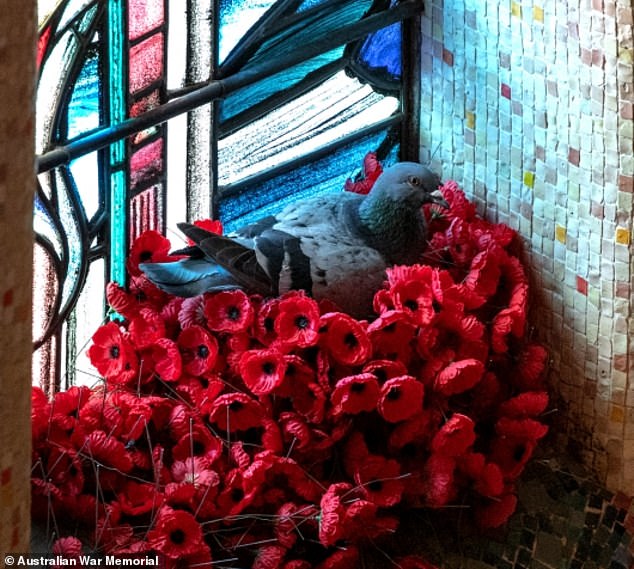