The cost of the most popular and latest mobile phone handsets have typically increased by £197 on average since 2018, new research has revealed.

The Apple iPhone 8 was the most popular individually sold handset available in 2018, coming in with a total average cost of £920, according to new data from Uswitch.

The cost of popular mobile phones has increased by £197 on average since 2018, data says

Contract payments for the most sought after smartphones have increased as well, to spread the cost of these pricier handsets.

Which is cheaper – individual handsets or contracts?

Those opting to buy a contract over an individual handset have made more savings in 2021 so far.

The average handset price for the most popular smartphones comes in at £1,101.

Combining this with a Sim-only deal to make use of the device, adds an extra £105 on average per year, totaling £1,206.

However, when it comes to contracts, consumers can expect to pay £1,162 on average – £44 less than a handset and Sim-only deal.

Savvy shoppers who are still happy with their handset at the end of their contract see Sim-only deals now providing 5GB more data, on average, than they did three years ago – all for the same cost.

Catherine Hiley, Uswitch’s mobiles expert, said: ‘With new tech features and applications built in, the price of smartphones has skyrocketed in recent years. But there are many ways to push costs down and still get top of the range tech.

‘It is worth shopping around for the right features and data allowance and deciding whether getting a Sim-only deal is an option for you.

‘Keep an eye out for bonus features as well. Many smartphone contracts come with free subscriptions to services such as Disney+ and Amazon Prime, which may save you money elsewhere’. 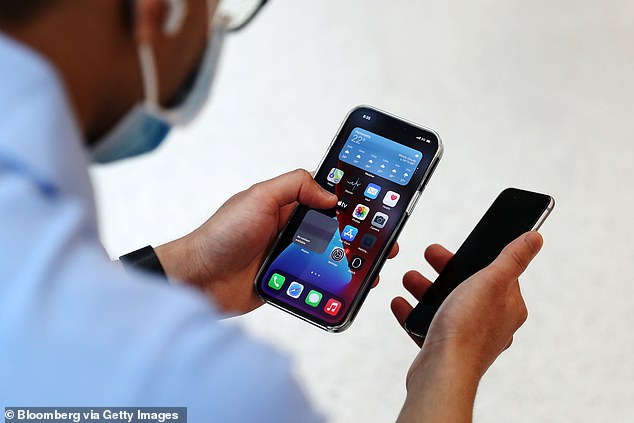 Top tips for saving money when buying a new phone

1. How much data do you need?: Log into your account on your network’s website to check your usage. If at the end of the month, you’re still left with lots of unused data, you’re probably paying for a data allowance that’s too generous for your needs.

2. Sim-only switching: If your contract is ending, you may benefit from shopping around for a Sim-only contract. These often come with a cheaper price tag, and will likely have a better data allowance.

The average Sim-only deal could cost £600 less on average, than a 24-month iPhone 8 contract.

3. Choose a refurbished phone: A refurbished phone is generally one that has been pre-owned. They come in varying conditions but are thoroughly checked to ensure they are in full working order. You’ll find they’re almost always sold cheaper and often come with a warranty, as well as a charging cable.

4. Use of fixed data cap: If you choose to go with a contract, ensure you select one with the capability to put a fixed data cap in place. This means you will receive a notification if you reach your data limit, so you won’t overspend without realising.

You can get in touch with your mobile provider to request a cap be placed on your data in some cases.

5. Are there any add ons? These days, a lot of phone packages come with really attractive perks, such as free access to big name streaming services. Many networks provide access to streaming services such as Disney+, Amazon Prime or Britbox completely free for existing customers.