Millions of people with allergies have been urged to avoid several types of protein powders, shakes and detox drinks.

Ultralife has recalled five of its popular food supplements because they may contain milk, gluten, nuts, eggs and soya.

A labelling error means the products don’t specify the ingredients on the packaging – which could prove fatal to those with allergies.

Government advisors at the Food Standards Agency sent out the alert, with fears it could pose harm to consumers who are unaware.

It warned that both flavours of the Ultralife Detox Total Cleansing & Detoxifying Drink contain nuts, which haven’t been listed.

The Ultralife Performance Protein range has been made with egg, milk, wheat and soya, according to the FSA warning.

And the Ultralife Performance Lean Gain range contains egg, milk and wheat – but none of the ingredients are declared on the label.

Customers have been advised they can return the products to where they bought them in exchange for a full refund.

Ultralife stocks its products on its own website and they are listed on Amazon and other digital pharmacies.

Government figures suggest that up to two per cent of adults and eight per cent of children have a food allergy.

This equates to around two million people living in the UK with a food allergy, which can lead to anaphylaxis.

Around ten people in the UK die from allergic reactions to food every year due to undeclared allergenic ingredients, according to the FSA. 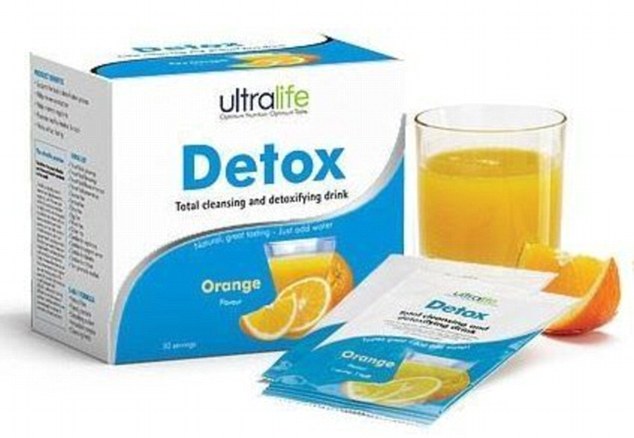 It warned that both flavours of the Ultralife Detox Total Cleansing & Detoxifying Drink contain nuts, which haven’t been listed

The news comes after the FSA last month ordered a mass recall of a brand of tomato ketchup amid fears it could contain plastic.

The products possibly affected were the 440g size bottles with a best before date of March 2019 and the batch code 7269.

And a vegan food company popular with Nigella Lawson also faced a mass recall of its yoghurt products in February.

CO YO, which was set up by a police officer while she was on maternity leave, had to withdraw all its flavours of dairy free coconut milk yoghurt.

The FSA discovered that it actually contains ‘undeclared’ milk. The agency asked consumers to return the yoghurts to shops and get a refund.